Lost Dimension is the next JRPG published by Atlus for North America; combining JRPG design with tactical combat along with one very unique twist; I just wish that it was more prevalent in the game’s mechanics.

Lost Dimension begins shortly after a madman calling himself The End attacks the world and decimates the population. He issues an ultimatum that he will destroy the entire world in 13 days from his mysterious tower. The government has no choice but to send in the psychic team called SEALED into the tower and hopefully stop The End before the time limit is up.

The game focuses on 11 remaining SEALED members who have found themselves in the tower with the player controlling Sho. Sho is the impromptu leader of the group with each member having different powers, personalities and abilities. From a tactical point of view, having each character be completely unique lends itself well to the design and you start to appreciate each person’s abilities.

Each floor of the tower is broken down into side and main quests for you to complete. For each battle you’ll choose five other members of your team to join Sho on a mission; this is very important to the game’s twist which we’ll talk about in a minute.

Combat is turn based with your team going first and then the enemy. Combat is all about positioning and assist attacks; if a party member is within attack range when someone else attacks, they will join in on the attack. There is no limit to the amount of times someone can do this during combat and it allow you to turn one attack into 6; but keep in mind that the enemy can do it too.

Special attacks or “gifts” drain gift points and a stat called SAN that represents the character’s sanity. Run out of SAN either due to using special attacks or taking damage and the character will become enraged and become out of control for a few turns. During combat is where you’ll see the unique characters shine as each one can attack differently and will grow to use vastly different means to help your group. 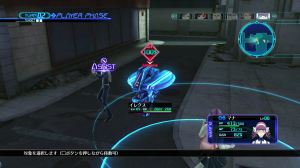 Another mechanic is the ability to defer someone’s turn to a party member who already attacked; letting someone else go again instead of the deferring member.

This can allow you to heal multiple times, have your strongest member go again and other useful functions. One very, very important point to mention is that most attacks will cause the enemy to counter if you are within their attack range; keep this in the back of your mind as I’m going to return to this point soon.

All this is pretty standard stuff for tactical JRPG design, but Lost Dimension features one very unique twist that combines The Mole with Sophie’s Choice.

When the group meets The End for the first time, he reveals to them that there is a traitor in the midst who is out to get the group and prevent them from succeeding. At the end of each floor the group enters the judgment room, where they must vote one of their members to be erased before they are allowed to continue up.

Sho’s unique talent is that he can read minds and this sets him and the player up to play detective on each floor. Here’s how it works: After completing a quest in a floor, Sho will read the minds of all the teammates he took with him and will hear their thoughts. On each floor, three party members will be suspicious with one of those three being the traitor. 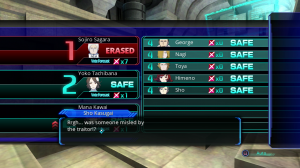 Each floor of the game will require you to “erase” a party member, removing them from play for the rest of that playthrough

After you read the minds of the group, you’ll be able to view how many party members had suspicious thoughts. You’ll need to take different party compositions in order to narrow things down.

Once you’ve narrowed things down to the three suspects, you can use a Vision Point (which you get three per floor) to enter the person’s mind to discover whether or not they’re truly the traitor.

Once you know who it is, you’ll have to convince the team to vote for them: by having conversations with them and having your supporters contribute more in battle; the more they do, the more their vote is worth at the end. If you don’t get rid of the right people when the time comes, it will cost you when you reach the end of the game, but there is a new game + mode.

As an added touch, any character that gets erased leaves behind a materia which contains all their skills that were unlocked before they were killed. Certain skills on every character will require a specific materia and it adds a little more variety to the skill tree system. This allows different players to have different options based on who gets erased along with the character’s base set of skills.

So far Lost Dimension sounds great, but there are several mechanic and system issues that really hurt the game.

The problems with the game stem from the traitor system and the general mechanics of combat, and we’ll start with combat first.

As I mentioned further up, characters and enemies alike can counter any attack within their attack range with exception to certain special attacks, and this can be done as many times as they are attacked. It’s important to note that assist attacks don’t count for countering and that’s a big deal.

The problem with the way the mechanic is set up is that it renders combat very one note and makes the bosses extra punishing. Boss fights are typically with large enemies with a huge attack range and damage along with armor. Their basic attack generally does two to three times more damage than your strongest attack at that level. What ends up happening is that the counterattack is so devastating that the boss gets essentially 7 hits per round: 6 from countering and one of its own.

There is no way to mitigate it (other than skills that don’t cause counters), no way to really avoid it and the boss’s armor is so great that some of your characters may not do any damage against it. The only way I’ve found to win these fights is to use assist attacks to score critical hits and lower the boss’s SAN rating until they are dazed; when they will take bonus damage. 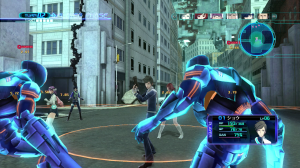 Because of the focus of assist attacks, combat devolves into surrounding the enemies you want and finishing them before the next round.

If an enemy group gets a party member within range, there is a good chance they can kill that person with all the assist attacks. As with most JRPGs you can inflict a number of status effects on enemies, but damage is still king.

Moving on, the idea of having a traitor in your party is interesting with the fact that your party is only 11 unique characters. However when this is paired with the tactical system, there are some issues. The first one is a biggie: The traitor has no impact on how the tactical combat is played other than on deciding who to bring.

The characters bring that up in game a few times but it still would have been interesting to see the traitor doing something or even having you and Sho misled based on how characters respond. The game hinted that characters would not perform assist attacks with people they didn’t trust, however I never had a case where the assist attack wouldn’t trigger.

The other problem is with the character balance and what this means when you lose a member. The traitor pass the first play through will always be randomized to keep you guessing, but this can create some unintentional difficulty spikes based on who is chosen.

Of your 11 members, you have one who is the dedicated buff/debuffer and one who is the dedicated healer. If they turn out to be the traitor and are erased before you unlock the bulk of their skills, guess what? You lose your main sources of skill based healing or buff/debuffing. This creates a difficulty curve at the start that could leave the game being a lot harder depending on the order of the traitor. Also the hard choice of finding the traitor can be broken very easily which I’m not going to spoil here.

The game also runs into a routine problem of JRPGs with not explaining a lot of its numbers. There are stats called DEX, PSY, STR, VIT, etc, but the game doesn’t tell you what their purpose is. There is also no way to see attack values before confirming an attack on an enemy. Finally, the equipment system outside of the Materia mechanic is very basic; equipment unlocks come with each new floor and is a very limited mechanic.

“They Smile in your Face”:

Lost Dimension is a game that is banking on its unique twist of the traitor mechanic to distract from the design problems. Unfortunately it doesn’t work, which is a shame as the twist of a set cast that will randomly change on each playthrough was a great idea.

It’s just unfortunate that the game’s main twist is so detached from the rest of the game, as very few titles have you dealing with an untrustworthy team. Lost Dimension isn’t a bad game, but your interest in it is going to live or die based on the twist and that may not be enough for some fans.