The Messenger Aims a Little Too High With its Design

The Messenger is one of those games that looks very unassuming, like the title. This modern-retro throwback to the likes of Ninja Gaiden starts out innocently enough, but introduces a whammy of a twist. However, its impact on the design is up for debate.

The story follows humanity whittle down to one village after a curse has destroyed the world. A prophecy foretells the coming of a hero from the west that will save everyone. You play as a ninja of the village who find that after the village gets wiped out by the demon king he is given a scroll by the hero. As the newly appointed messenger, it’s up to you to head to the highest peak in the land.

From the very start, the game hits all the right beats in terms of the modern retro format — with a great 8-bit aesthetic and chip-tune soundtrack. Control is on point, as you jump and slash your way through monsters and obstacles.

The unique mechanic present is the ability called “cloudstepping” that restores your jump if you hit anything while in the air. The majority of the game’s challenges will be about you getting across gaps and around obstacles with this quasi infinite jumping power.

You’ll unlock several other powers that will enhance your agility and will have to be combined if you want to find all the game’s secrets.

With that said, it’s time to talk about the game’s twist and there’s no way of doing it without spoiling the story. (If you want to remain spoil free, skip to where I say “END SPOILER”)

Halfway through the game, you are given the power to travel through time to 500 years in the future. At this point, the entire game switches from an 8-bit aesthetic to 16-bit; complete with enhanced music. The game then reveals that the role of the messenger is repeated throughout time with the events stuck in a loop. Each cycle, a new messenger takes up the scroll to try and find a way to break the curse before giving the scroll to the next generation.

From there, all the levels that you visited up until that point become open again through fast travel, with your mission now changed to exploring for new upgrades and finding the key to breaking the curse. The major addition is the added ability to switch between 8 and 16-bit versions of each area. 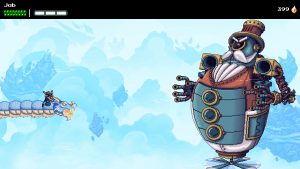 the gameplay opens up the more you play

The twist of the Messenger is the real make it or break it point for your thoughts on the game, and I couldn’t help feel that they didn’t go far enough.

The Messenger is by no means a bad game, but with so much riding on the twist, I was expecting more integration into the level and game design. The levels themselves from a design standpoint don’t have a sense of personality to them; in the sense that the level’s theme becomes a major part of the gameplay.

While each level does have uniquely-themed obstacles, it’s not the same as the complete difference in design and feel that we saw in Shovel Knight. There, every stage would have a different feel and set of challenges to it based on the boss in questioned. The reason for the sameness is partly due to just how agile the player is in the Messenger and the game not being able to keep up.

Once you get cloudstepping mastered, you can metaphorically fly through the levels. At that point, you start to realize how very little is happening in each stage. With that said, there are some occasionally challenging sections; specifically, the hidden green token challenges. The stages themselves were built to accommodate the twist, but the overall level structure doesn’t change to the point of saying that each stage is two different ones.

The only major differences you’ll find are that the level may be easier or harder, or a path that wasn’t open is now accessible. There are secrets to the game, along with a true ending, but they’re not that hard to find. I have to give credit to the developers for having several options in terms of finding all the secrets, so that it is possible for everyone to find everything.

New areas do get unlocked, and I appreciate how the game feels like a nesting doll of gameplay: with each new addition growing the gameplay loop. However, the level designs always feel like they’re just a little too long. Despite the variety of characters and the story itself, I was really hoping for more boss fights and different situations. 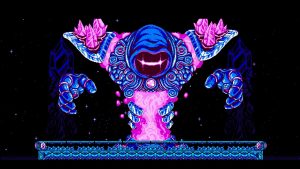 The music and aesthetics are well done

From a difficulty standpoint, The Messenger is on the medium/medium-hard side; easier than Celeste, but can still give novice players a run for their money; especially if they go for the bonus challenges.

One other complaint is that I wish the game had more fast travel points in it, as you will be doing a lot of backtracking if you miss important items the first time around.

The Messenger is another example of a game that is greater than the sum of its parts. The writing and general story made me laugh out loud and there is more to this game than at first glance.  The music is amazing, and one of my favorite retro soundtracks in 2018. The developers have already promised free DLC coming and I hope that the game does well for them. Even though it doesn’t reach the same heights as Shovel Knight in terms of modern retro design, there is plenty to like here, and I hope we do see a return of the messenger at some point.

Black Mirror’s Bandersnatch on the Illusion of Choice

Discussing the Medium of Videogames