Slay the Spire was one of my favorite games released last year and one of those titles that I just knew it was going to be a great game after only a few minutes of play. Since its release and early access, I’ve seen several games that attempted to clone or mirror its success, but none of them did it with the same eye towards design and aesthetics until now.

Monster Train is a smart execution on Slay the Spire’s theme, but also manages to go its own direction with a different focus on roguelike design.

Monster Train follows the last remnants of hell who have banded together to try and reignite the heart of hell that has been taken over by the angels.

For each run, you’ll choose your deck by picking two of the available factions. Whichever you make your primary will get you a champion: a powerful unit who can be played each encounter and upgrades throughout a run. Factions are made up of spell and unit cards, with each faction having a different theme and special effects.

From there, you’ll begin an eight-stage run to the center of hell while fighting the angels along the way. For each area of hell, there are always two paths with the possible events and shops randomized on each play. Shops are vital, as they will provide you with the means of upgrading unit and spell cards with upgrade stones; allowing you to set up potentially game-breaking strategies.

The use of a deck to define combat options has certainly flourished following Slay the Spire, but Monster Train does things a bit differently compared to its peers.

Your mission for each fight is to keep your pyre from taking damage by the invading angels. The train is separated into three floors and the engine where the pyre sits. Each turn, enemies will pour in from the bottom floor and any surviving enemies will begin moving up. Placing units will take up valuable space on each floor and you are limited by both card draw and ember (mana) to play them.

To keep the player guessing, and the experience varied, each stage of your trip has you fighting a different faction of angels; with the troops shuffled on each playthrough. For an added challenge, you can turn on trials that give them further advantages with a reward on the line if you win. 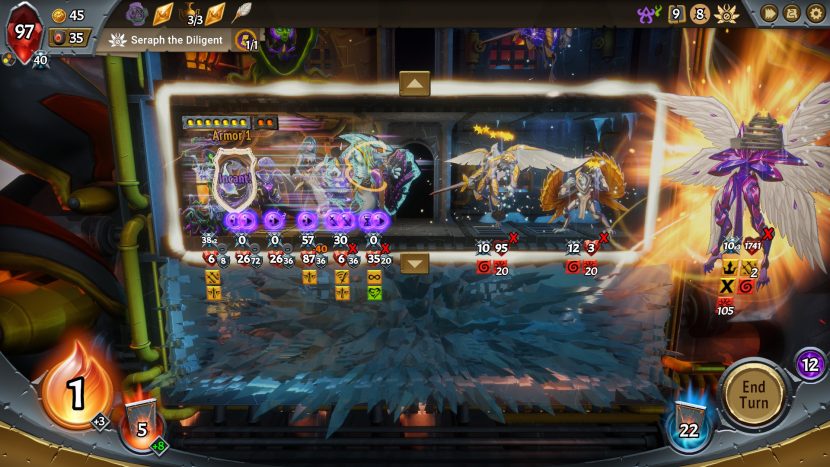 the right cards and options can lead to overpowered plays

Win or lose, you’ll earn experience for your selected clans that will go towards unlocking more cards and relics (run affecting items) for future playthroughs.

What separates Monster Train from Slay the Spire and other roguelikes is how the developers focused RNG (random number generation) to create variance.

As we’ve spoken about before, variance for a roguelike represents the number of ways the game can generate completely different runs for the player. This can be based on what the player has access to and/or what the game throws at them.

Good variance is very hard to do because games are made from fixed elements and events. One of the reasons why Slay the Spire worked so well was due to focusing the variance of a run based on what situations and rewards the player gets. In turn, it requires the player to come up with a plan based on the random outcomes and try to make lemons out of lemonade. The difficulty of Slay the Spire comes from the unknowns that pop up during a run, and how it is often very hard to get a solid plan due to the RNG at play.

With Monster Train, the developers subtly embraced RNG, but have it more focused on specific parts of the mechanics. Each faction has fewer cards compared to the characters in Slay the Spire, but it also means you have a better idea of what cards can show up on a run. Speaking of, you’ll start each run with a preselected set of cards based on your faction, and then randomly get one relic and an upgrade for your champion.

On the map, you’ll always know what possible reward types you can get access to after each stage, but you won’t know specifically what each path is going to give you. During an actual battle, the only real sense of RNG is the order in which your deck draws cards. Enemies behave the same way every battle, and damage predictions are 100% accurate (notwithstanding bugs).

Because units can only be played once and there is a fixed number of turns, battles are more focused in Monster Train compared to other deck builders. In response, it frees up some of the mental energy of long-term planning in favor of figuring out the best ways to make use of your options with each new upgrade or reward.

With Slay the Spire, runs can quickly turn into chases for specific cards or relics for certain strategies. In Monster Train, due to you having two factions’ worth of options per run, it gives you more flexibility in terms of your options.  Each faction has that one “overpowered strategy” that will make every run a piece of cake. But having two factions together allows you to discover alternatives when you’re not lucky enough. I want to stay on the faction design for a minute, as the developers did a great job with fleshing them out. 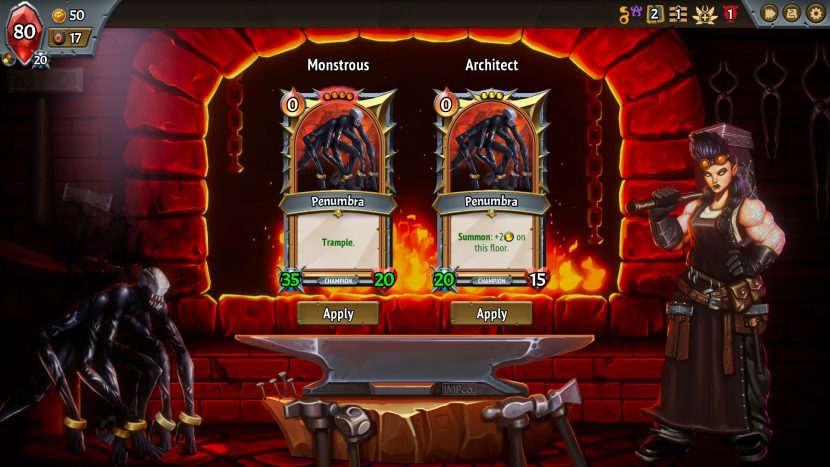 By giving each faction a unique champion with unique mechanics, the design is inherently set up for a lot more strategies compared to other deckbuilders. For example, healing spells are popular among the awoken faction as low-cost cards. Combine them with the stygian who can boost themselves for every spell card played, and you now have easy access to cards that will keep them alive while making them stronger.

These design decisions make Monster Train one of the fairest roguelike-styled games I’ve played in some time. Granted, you will have situations where you’re going to just lose by virtue of bad luck, but there’s far less commitment to a run of the game. Most runs will usually last around 40 minutes to an hour, and it’s rare for something to just completely take the player by surprise and ruin everything.

My only concern design-wise is that as you go up the covenants (ascension mode from Slay the Spire where new rules are introduced to add difficulty), the game seems to center around “spiky builds” — when one combo or strategy is set up to steamroll the enemies. The quickness of each stage also puts a forced time limit on build-up strategies. I found that my most successful wins tend to happen with everything built around one row of units and spells. Strategies that take multiple turns before they begin to pay out are harder to pull off, as you are always waiting for the boss to begin their ascent.

And despite the number of ways for the player to overpower their decks, you are still going to run into situations where you will lose and there was nothing you could do to stop it. I will be interested to see how the developers handle balance issues and where things will fall on keeping overpowered builds viable.

Monster Train, like Slay the Spire before it, is one of my favorite games for the year. And as with Slay the Spire, there is a lot of potential for future content and support if the game succeeds, and I hope it does. If you’re a roguelike fan, and especially if Slay the Spire hooked you, then Monster Train is the perfect follow up to play.