It’s rare in the game industry for us to see team ups outside of a studio, and the last time that I can think of one would be Chrono Trigger. Meaning that I probably won’t see my dream team of Warren Spector, Hideo Kojima and Tomonobu Itagaki happen.

With Ni No Kuni, we have the team up between veteran JRPG developer: Level 5 and the famed Studio Ghibli and while there is definitely magic in the air, not all of it is good.

Let’s get the big plus out of the way: Ni No Kuni looks and sounds amazing. The animation and art style looks like you’re playing a Studio Ghibli movie and that may be enough for some people to buy it on that premise alone. Every song in the game has that epic feeling to it and the animated scenes created by Studio Ghibli looked excellent.

Ni No Kuni tells the story of Oliver who after witnessing his mother die of a heart attack frees a fairy from a curse. He is then told by the fairy that there exists a parallel world under attack by an evil being who cursed him to begin with.  And that there is a chance that he can save his mother by becoming a wizard and saving the alternate world.

And so begins Oliver’s journey doing everything a young boy in a JRPG would: fight monsters, recruit an unlikely group of teammates and of course be the thorn in the side for the big bad.

As Oliver runs around the over world or in dungeons, he can spot and be spotted by various monsters. When the player comes into contact with one, they go into the battle mode which we’ll talk about more in a minute. As for the rest of the gameplay, the main form of progression is similar to Level 5’s previous titles of having to go to specific areas to move the story along.

One area where Ni No Kuni differs from other RPGs is the helper side quest. In every town there is a store that specializes in providing help to people in need, which gets updated usually when the player completes a plot objective. The store also gives the player bounties on extra strong monsters in the field that the player can go after for a reward.

Helping people and defeating bounty monsters will earn the player stickers that fill up a “helper card”. Every ten stickers will award the player one helper point, said points can be turned in at the helper store for permanent upgrades. These upgrades range from increasing enemy drop rate, to making it easier to sneak up on enemies in the field.

This system does a good job of incentivizes the act of performing side quests and gives them value beyond just money.

Now the world of Ni No Kuni had a lot of thought put into it and it does a lot to help pull the player in. But when it comes to the combat system, this could be what drives a lot of people out.

Ni No Kuni‘s combat system is one part Pokémon and one part of the Tales series. After a major plot point, Oliver gains the ability to tame the monsters in the field (which I won’t spoil here.) Once a monster is tamed the player can take   it into combat.

Before combat the player chooses a stable of three monsters that they can switch between during combat, which can be done for each party member. Combat is real-time in a sense: You move your controllable character around and can avoid basic attacks that way. When the player uses any skill, they lose control over their character while they perform the selected action, but in some cases you can cancel out of it early. 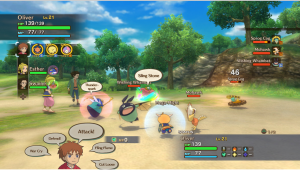 While this screenshot may look busy, the actual gameplay is easy to understand once you start playing.

Special attacks or as they are called here: “tricks” come in all varieties, based on what type of damage they do, to how they are fired.

Most of the tricks cannot be dodged by moving and instead can be mitigated by using a defensive trick.

Every monster in the game is made up of 6 primary attributes: attack speed, movement speed, physical attack and defense and magical attack and defense. Health and magic points are not tied to the monsters, but instead to the person on your team who calls them out. This is a major point and problem that we’ll get to very soon.

The other distinguishing characteristic of a monster comes down to their resistances. Certain types of attack can do extra damage, or can be resisted based on the monster itself. Each monster also has an astrological sign that plays into a loose rock-paper-scissors format. You know if a monster is doing extra damage if red numbers appear while attacking a monster and blue numbers if they are doing less.

Each monster also has a stamina rating and can only be out on the field for about 30 seconds( at the beginning.) When time runs out, the player will have to switch to another monster in their staple or send out Oliver. Oliver can perform spells, use items, or issue AI commands to his team mates.

Now, all this sounds like a way of making a different type of take on the Pokémon formula, but Ni No Kuni takes simplifying too far and leaves us with a dumb down experience.

The biggest issue and mistake in my opinion is how vitals are not tied to each individual monster but to the person who brings them out. What happens is that since the only factors you have to consider are the main attributes, it removes a lot of the choice and strategy we see in other customizable party based RPGs.

Case in point, if you have two monsters of similar resist but one starts out with higher base stats for their physical damage and defense, the higher monster would be  a better choice every time. This isn’t like Pokémon or Shin Megami Tensei where there was strategy involved based on the monster’s other stats: Do you take a monster that has high health but low damage as a tank, or a low health monster with a huge mana pool for casting spells?

While the game tries to add complexity with the sign system, stats are king in the world of Ni-No Kuni. Someone with a high enough attack stat can just chew up a monster, even if they are the weaker sign.

To make matters worse for combat is the party AI and how inadequate it was.  The other members of your party are controlled by the AI and the problem is that the AI simply doesn’t know how to play the game properly. For instance, if they are using a monster who is stat wise better in every way compared to the monster, except for the sign, they will switch to a weaker monster that may counter the sign but take more damage and deal out less.

They will also have no qualms with using high MP draining tricks where simple melee attacks would suffice. But worse still, is that the AI doesn’t understand how to defend itself. 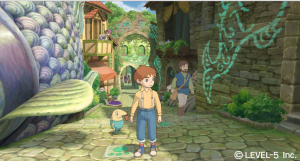 Ni No Kuni’s visual design is one of the best seen on the PS3.

During regular and boss fights, the enemy may activate a cut scene driven trick, with the player given a few seconds of warning before it goes off.

There are two main defensive tricks that the player can use to nullify the damage, if they can pull it off in time.

The AI however isn’t programmed to use them and will get devastated by bosses until you learn the “all defend” tactic about 15 hours into the game. But even then it doesn’t guarantee you safety, as the AI may not switch to a monster that has a defense skill. Simply put, after coming from playing Xenoblade Chronicles last year that had a much better developed party AI, this feels like 5 steps back.

For all the visual polish and world building that went into Ni No Kuni, my last problem is a return to the JRPG trope: The grind.

Ni No Kuni features an exhaustible amount of grinding that goes way beyond the usual for the genre. First is the general unlocking of new content and quality of features like fast travel.

In Xenoblade Chronicles you can start fast traveling from the first town, in Dragon Quest 9 you can get a consumable very early. While in Ni No Kuni, expect to go through about 15 hours before you get it. Frankly, Ni No Kuni is not complex enough to spend so long introducing new mechanics.

Combat features a huge grind due to the simplistic combat system. As mentioned, stats are king in the game which means that lower level monsters have no value. Since they share health with the main cast, taking a low level monster into combat can wipe out someone very fast.

But when you capture a new monster, most of the time they go back down to level one, instantly making them useless unless you grind. Whatever monsters you have in your three characters summon group will receive exp after a fight. However by the time the rapid leveling normalizes, you’ll find that the monster will still be under leveled for average enemies, equaling more time spent grinding.

In this regard Ni No Kuni commits a game design sin: punishing the player for playing the game. As if you want to collect a variety of monsters, be prepare for a huge increase in grinding.

In the end, Ni No Kuni: Wraith of the White Witch is two-thirds a great game, with an average to borderline poor last third. The story was charming and the graphics amazing, but the minute to minute gameplay just wears thin fast. Simply put, your enjoyment over the game is going to be dependent on how much you can get over that last third.

At the Crafting Table: An Artizens Interview