Outland which was released on XBLA and PSN a few years ago is finally making the trip to the PC. The game combines metroidvania style gameplay with bullet hell shooter reflexes to create a game that starts out great, but runs out of steam before crossing the finish line.

The story of Outland is that in the present day a man is haunted by visions detailing the end of the world. After all modern means have been exhausted, he seeks a shaman who tells him that he is the reincarnation of an ancient warrior who saved the world thousands of years ago from the spirits of light and dark and that it’s up to him to defeat them again.

The simplest way to describe Outland would be if someone combined the bullet hell shooter Ikaruga with a 2D platformer. Each part of the game is split into sections which the player must traverse. One big compliment that I have to give the developers was that controlling the main character was very responsive with a gamepad, but you can play it with a keyboard as well.

As you play, you’ll come across paths, bonus objects and more that can’t be access until later. Outland’s main mechanic has to do with light and dark powers. You’ll eventually unlock the ability to shift your form between light and dark or blue and red. This will allow you to attack enemies of the opposing color and not take damage from energy blasts of the same color. 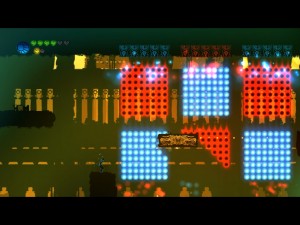 Avoiding the different energy colors is the main challenge throughout the game.

The use of the different colors combined with the almost water color like aesthetic of the world gives Outland a great visual style. And trust me; you’ll be seeing a lot of color as you play the game.

Advanced challenges will require you to shift your form constantly to avoid damage and deal with the enemies. There are also co-op maps that you can play, but I was unable to find someone at this time.

For a first impression Outland is very strong, unfortunately its biggest problem is that it’s not able to sustain that level of enthusiasm.

Outland suffers in the growth department despite the metroidvania like design. The use of color and changing forms doesn’t really go anywhere either in terms of exploration or combat. Nothing really changes with how you play the game based on your form and eventually the levels begin to bleed together because of it.

Each area had the same types of challenges fighting the same types of enemies with little difference. While you do unlock new abilities as you play, none of them are really game changing in the sense that they add new challenges or mastery to the game. It’s a far cry from other metroidvania styled games where how you play changes based on your upgrades and growth and the level design. 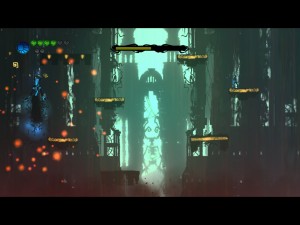 The boss fights were the highlight of the game due to their unique situations. I just wish the rest of the combat was as interesting.

With Outland, every new upgrade is simply folded into your regular routine and the game goes down a few pegs because of it.

Even having hidden items doesn’t help as they mostly unlock artwork and passive upgrades which again doesn’t change how you play the game.

This kind of monotonous design also extends into the combat system. Many enemies will just let you smack them until they die with advanced enemies able to attack you through your hits. Instead of this adding to the complexity, just makes fighting them feel like busy work. The only good point about combat would be the boss fights that despite adhering to the same color switching mechanic did feature varied situations and strategies to win.

One final complaint is that the game’s strong visual aesthetic does come back to hurt it in the later areas. There are plenty of sections where the camera zooms out to cover an entire large area and when that happens it becomes easy to lose your character in the sea of red and blue projectiles flying around.

Outland feels like a game concept that was stretched out to meet a certain length requirement instead of developing the game design further. Which is a shame as the beginning of the game was very strong. But with too little growth makes this spiritual quest seem like a slog.