When it comes to Mario games it’s weird to say that the RPG spin-offs have become the more hardcore option. The Paper Mario series which started off almost as a self parody grew into a successful take on the Mario license, with the GameCube exclusive: Thousand Year Old Door being the high point.

Now with the 3DS we have a new take on the formula and while I applaud designers, who do something different, let’s just say I got a paper cut this time.

For those that have no idea what I’m talking about, Paper Mario takes place in a world where everything is made out of paper and 2D (no, I’m not kidding.) In Sticker Star, the developers have taken this concept to its logical conclusion: Magic Stickers that can be attached to give someone special powers.

As always a magical mcguffin has been broken by Bowser and the princess kidnapped, requiring Mario to go on a Mushroom Kingdom spanning quest to save everyone.

The 3D effects of the 3DS are used incredibly well and really make the game seem like a popup book.

Now, while this may look like the Paper Mario of old, the designers have cut (no pun intended) a lot of the mainstays of Paper Mario and the RPG genre out. There is no equipment to buy, partners to join Mario’s party, or even experience to level up.

Instead, stickers have become Mario’s arsenal. Each area on the world map is broken down into stages like the platformers and stuck all over the place are stickers. Peeling off a sticker will add it to Mario’s album which takes up the entire bottom screen. Stickers come in all types and rarities, with the sparkling stickers doing the most damage (no, seriously.)

Everytime you use a sticker, it is removed from your album, but there are usually plenty of stickers lying around each level. As in previous Mario RPGs, enemies may resist or counter different types of attacks forcing you to mix up your sticker use.

Mario can also find everyday objects that can be turned into stickers for special attacks, or used in a level to solve a puzzle.

“Whenever you go out and do something different, you don’t have previous games to learn from and have to go in blind.”

One mechanic returning from previous Mario RPGs is the active battle system. Correct timed presses of the A button during combat can reduce the incoming damage on Mario, or increase the damage of a sticker.

For all the charm of Sticker Star, a few questionable design decisions drive the game into frustrating territory.

Sticker Star tries to do a lot of things different with the use of stickers and changes to RPG design but not everything works.

Fighting most minor enemies seems like a waste as you’ll only receive a few coins and rarely unique stickers. This makes the preferred strategy to just run around them and make up the coins by finding them in the level. 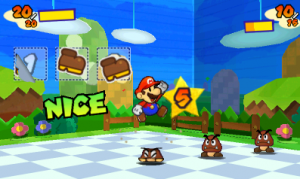 Basing all of Mario’s abilities on sticker use helps Sticker Star stand out from other RPGs.

The combat system’s unique mechanic also got on my nerves. How it works is that normally Mario can only attack once per turn. But you can spend three coins to activate: “the battle spinner”.

This slot machine will increase the number of attacks you can make for that turn by either two or three based on how many icons you match. You can guarantee at least two in the row by spending additional coins, but this cost escalates each time you use it in a single battle.

Now if this was an optional expert system, I would be ok with it. But there are several parts where you have no choice but to use it to win a boss fight. The slots spin so fast that luck is definitely a factor. They should have went with the system from Shadow Hearts Covenant, where the player could control how easy or hard the timed button presses during combat were – with more damage as the reward, or not doing any as the punishment.

Sticker Star more often than once, can be obtuse with its puzzles. Many times the special item needed is not even in the same level or world, forcing you to scramble around looking for it.

What’s worse is that every time you use a sticker to try and solve a puzzle, the sticker is consumed regardless if it was the right one or not. When you combined that with the fact that you have a limited inventory of stickers, frustration begins to set in.

Adding frustration, every time you use a special sticker, the only ways to get it back is to either find it in the game again (usually where you first picked it up), or spend money at one of the stores .  However while a basic sticker can cost anywhere from 3 to 30 coins, special stickers start at 90 and go up from there.

Imagine playing an adventure game where you had an inventory limit and every time you either combined items wrong, or used the wrong item in a spot, it disappears from your inventory requiring you to go back to where you originally found it. That’s what solving the puzzles in Sticker Star is like.

The final infraction of this system comes down to the big boss fights at the end of each world. The boss fights are always with extra large enemies with tons of health. Several of which have a special sticker weakness that renders the fight easy… but the game won’t tell you what that is or even hint at it.

Not only that, but the game won’t even tell you what the special stickers’ actual use in combat is for, adding further confusion. Forcing you to either turn to a hint guide, or attempt to brute force your way through the fights, using a lot more stickers then what’s needed.

When you combine that fact with special stickers that take up more space than normal ones, you run into the age old trope of RPG design: Hoarding items for their hopefully eventually use.

Paper Mario: Sticker Star Saga is one of those games that I hate to come down on, as this was not a case where the designers just threw a game together. You can tell that there was a lot of thought and design put into the game systems. Whenever you go out and do something different, you don’t have previous games to learn from and have to go in blind.

Sadly this is definitely a warning to the designers out there on both the importance of having people play test your game and how the smallest details can come back to hurt an experience.