Return of the Obra Dinn is one of the most unique games I’ve played in some time. This should come as to no surprise considering the designer Lucas Pope also created Papers Please. One part snapshot in time, one part mystery, this is one of those titles that you could spend months pouring over every detail. Despite that praise though, I feel this is going to end up on a lot of people’s best, or worst, lists.

A Mystery at Sea:

In the game you play as a nameless surveyor who has been tasked to explore the Obra Dinn, a ship crewed by 51 men who mysteriously disappeared. Your job is to chronicle the doomed journey of the Obra Dinn and figure out what became of everyone. Not to mention all the while looking at graphics that could have come from an 80’s computer.

Return of the Obra Dinn is one of the lowest stakes games I’ve played. You’re not on a grand adventure, or fighting enemies, or even getting jump scares — everyone is long dead, the ship is silent, and you have a job to do.

Your only guide to what happened is the book that you’re writing about the Obra Dinn. As you explore the vessel, the book will begin to fill in with events and start to tell the tale of what happened. Speaking of telling the tale, the game features one very special way of getting information.

Without any explanation, you are given a magical compass at the start of the game. When used, the compass will allow you to see the snapshot of how someone died, complete with the people and situation around them.

Each body that you find gives you another window into the past events of the Obra Dinn. From here, your mission is to figure out three things for everybody: Who were they? How did they die, and what killed them? 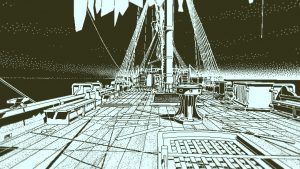 Despite the low-fi graphics, the game has plenty of style

Your only measurement of success in the game is by tying fates together. Whenever you get three fates correct, the game will permanently affix their information in the book. For the other times, information will be put on notepaper or scribbled in.

Despite not having any puzzles whatsoever, this is definitely an adventure game — or more specifically a mystery game. You’ll quickly go through the easy clues: people saying someone’s name for instance. The bulk of the crew will have to be figured out by many other details. Dialects, places on the boat, uniforms, and even just a passing detail will have to be examined and deduced.

In some ways Return of the Obra Dinn is a brilliant game, but your experience will vary based on how you deal with some of the difficulties and annoyances in the game.

Let’s start with the quality of life issues with the game before talk more about the gameplay. The game’s “low-fi” graphics can sometimes make it hard to see what’s going on. The game allows you to zoom in on people and then quickly go to their relevant portrait in the book, but I would have liked a more elegant way of viewing the story of a single character.

You can’t just instantly view a snapshot that you’ve already witnessed: you have to go back to the body in real-time and interact with them. I would have preferred the ability to cycle through snapshots once discovered so that I can get a better picture as to this specific character’s place on the boat.

When viewing snapshots for the first time, you are locked in the snapshot for about a minute and cannot start doing anything until the music ends. It’s a weird design choice, as there were times when I wanted to edit an entry but the game wouldn’t allow me. Speaking of weird choices, you cannot run at all while exploring the vessel.

There’s also no way to link people by face, as in, I know that person A killed person B, but if I don’t know the name of person A, I can’t do any connection within the book. I also would have liked being able to narrow down information without setting a fate. What I mean is if I see someone who looks like the butcher, or a top men, I would have liked to set their profession to narrow down what I’m looking for later on. 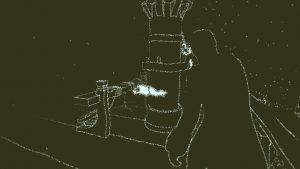 the snapshots are your only source of evidence

With that said, I want to talk about my frustrations with the design and why I will probably never finish this game without spoiling myself.

Return of the Obra Dinn is a special kind of challenge. It requires both in-game knowledge by being able to read situations, but also knowledge on outside areas. My problem with this approach is that I constantly felt like I couldn’t answer the questions the game wanted me to, because I didn’t know the questions to ask.

For me personally, I’m horrible with dialects and matching nationalities to them. Trying to figure out someone’s identity by their voice and appearance was very hard for me.  The game expects you to know about boating terminology and sailing. While there is a glossary, I still couldn’t make sense about bosums and the different parts of the boat. Like-wise, figuring things out by uniforms didn’t work for me.

I was hoping for more investigative elements, such as finding crew logs, searching the boat itself, etc, but the game only focuses on the snapshots.

There were plenty of one star (or easy to figure out) people that I have no idea even where to begin to figure out who they were. For those wondering, there are no hint systems, additional clues, or anything that can help push you in the right direction.

This is where the problem with linking people to snapshots reared its head the worst for me. The book and snapshots are divided into chapters that represent the various stages of the journey. You can find someone in one completely different part of the ship than their actual job or position due to the events.

I kept feeling like I was being hamstrung by the design of the game instead of being able to use it to solve the mystery. But with that said, Return of the Obra Dinn’s difficulty is highly subjective. I’m sure some of you reading this right now probably found everything very easy, and some of you may have had worst luck than I at it.

Return of the Obra Dinn reminds me a lot of Cultist Simulator; which was one of my favorite games of 2018. Both titles are about puzzling through the gameplay to figure out what’s going on. The difference between the two in my opinion is how both titles expect you to learn the design.

Cultist Simulator puts everything out there and asks you to piece through it to figure out the rules and mechanics. Return of the Obra Dinn felt like it was confusing for the sake of being confusing in how its UI and design worked.

This is one of those games that you are either going to love or hate, and it leaves me in a position where I can’t personally recommend it. The best thing to do is honestly try it out and see for yourself if the life of a surveyor is right for you.

Can You Market Any Videogame?