The Brilliant Dumbness of Shadow Warrior 2

Shadow Warrior has never been a serious series; if the title character “Lo Wang” didn’t clue you in. When Flying Wild Hog took over the series, we weren’t expecting to get a dumb, but fun shooter. With Shadow Warrior 2, they have taken things further both in terms of design and humor. Even though it’s not firing on all cylinders like Doom, Shadow Warrior 2 actually elevates FPS design in a different way.

Our story opens up with hero/bad-ass Lo Wang on a mission to recover an artifact for the Yakuza. After demon shenanigans, he finds himself with the soul of a woman stuck inside him as he attempts to save the day and make as many jokes as possible.

If you’re looking for a serious FPS, you can stop reading this review right here. Lo Wang is always cracking wise and the jokes fly as fast as the bullets from your guns. Make sure to wear headphones if you have children nearby, as there are plenty of dirty jokes here. Combat has you going from serene temples to dystopian futures at the drop of a hat. 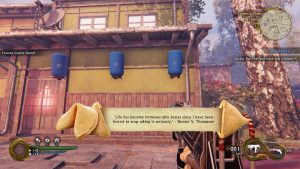 Despite the aesthetics, this is as far from a serious shooter that you can get

As you play, you’ll unlock all kinds of weapons categorized by type and ammo. You are free to mix and match weapons however you like; giving you a lot of freedom in terms of destruction. While the first game had an upgrade system, Shadow Warrior 2 takes things even further.

While it may not look it, Shadow Warrior 2 draws a lot from the RPG genre. Enemies can come in different variants and damage and resistances flash on screen like in Borderlands. Besides finding new weapons, you’ll also find random loot and passive abilities throughout the game.

Weapons can be equipped with trinkets that modify them in some way; with rarer items doing more. From elemental enchantments, reload speed and more damage, the min-maxing is strong here. You can also buy new gear from the various shops and upgrade your skills at level up. 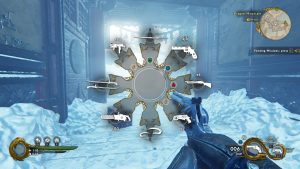 The RPG mechanics are definitely the best (and innovative) aspects of Shadow Warrior 2, but they do dilute the FPS elements compared to Doom.

What made Doom work so well and elevate the design was just how the pacing and the flow worked. Shadow Warrior 2 runs into the classic issue of combining Action and Abstraction design.

Despite featuring set guns, the gunplay doesn’t feel as refined compared to Doom. It’s hard to feel like a bad-ass using a shotgun when enemies shrug off shells and low numbers float over their heads. I wish guns could have had more of an impact on the enemy. Melee is very floaty and can be hard to aim when fighting multiple enemies. The combat never reached that same state of flow that Doom did within minutes of starting the game.

On the RPG side, the game overloads you with loot to the point of distraction. Playing comes to a standstill as you try to figure out what upgrades to add. The game could really use a better UI to quickly see how upgrades compare to what you have equipped. Just like a RPG, I found it easier to just not bother with common items once the magic ones show up. 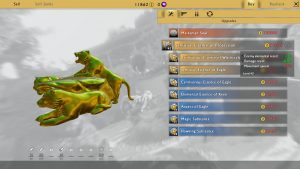 This is the first, first person shooter I’ve played to have loot overload issues

While it’s okay to stop and compare items in a RPG or ARPG, Shadow Warrior 2 is a balls to the wall shooter.

While I would have liked weapons that were randomly generated, I can just imagine the increased downtime that would create.

Because of the increased focus on RPG elements, level design has been scaled back compared to other shooters. The levels lack a sense of personality outside of the environment.  The objectives are to either recover an item or kill specific enemies.

Even though you can explore for chests, the best loot comes from fighting rare and epic enemies. The different modifiers on enemies were good, but the enemies lack personality and depth. One wave of charging enemies can be dealt with the same way as the next. Doom was the same way, but there was less focus on the enemies and more on the flow of killing them.

Since you are dealing with DPS and RPG rules, harder enemies can turn into a slog to fight. Elite and boss variants can resist or are immune to specific damage types. These issues do go away to some extent later into the game once you have upgrades and more varied weapons.

Shadow Warrior 2 is the textbook example of “Dumb Fun.” This could have easily been the best old-school shooter of 2016 if not for Doom. Unfortunately, Doom comes out to be the stronger game thanks to the refinements made and the better gameplay loop.

That doesn’t mean Shadow Warrior 2 is a bad game, but I didn’t get the same excitement playing it that I did from Doom. If the developers can refine this concept further, they could be on to the best RPS this side of Borderlands.

Be sure to check out the YouTube channel for daily video content. You can find me on Twitter for daily updates on what’s going on and help support the site via our Patreon Campaign.

A Critical Thought on the Survival of Small Games