Spelunky is one of those titles that gamers hold in reverence as an example of the greatness of Indie design. Developed by Derek Yu and released as freeware in 2009, the game became an underground sensation for how much quality gameplay was packed into a free game.

This year, Spelunky made its trek to the consoles with an enhanced edition before returning to the PC. Spelunky is an odd game: excellently designed, brutally frustrating and one of a kind.

An Expedition into Pain:

The plot of Spelunky is that you are an adventurer looking for a lost treasure in a mysterious temple where the rules of architectural design don’t apply. Armed with rope for making improvised ladders and bombs for causing destruction, your mission is to make your way through the various environments of the temple without succumbing to the many, many, many death traps that await you.

Spelunky’s design is all about procedurally generated levels with a blueprint of traps, enemies and possible secrets set for each of the game’s environments. The beauty of Spelunky and what made it take the world by storm is how it’s the only game I’ve played that managed to completely mesh the skill based gameplay of a platformer, with the unpredictability and challenge of a rogue-like.

Most of the time, rogue-like design is based around character or RPG like progression, IE: Leveling up, improving a character and so on. Spelunky has none of that, at the end of the day, how well you play the game will determine whether you win or lose. Items can be found that can open up new tactics such as climbing gloves, shotguns and more. But all it takes is one poorly timed jump, one enemy attack and a lot more to end your run. 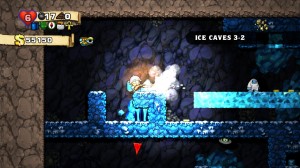 The items offer powerful upgrades to improve your chances.

Spelunky in that sense reminds me of a game like Demon’s Souls or Dark Souls and how it’s not really about the character getting better that makes the game easier, but you as the player.

When you first start playing, you’ll be making a beeline to the exit, never exploring, never going after treasure as why would you risk your run for a higher score?

But if you stick with it, you’ll soon reach a point of familiarity that you’ll start taking greater risks and spend as much time as you can going for that treasure. As it’s no longer about survival, but seeing how high of a score you can end the game with. There are a wide variety of items for you to experiment with and you’ll soon learn all the different tactics you can use thanks to them.

Normally, every digital store sells the same version of a game, but this is one of those times where the Steam version is the superior one for the computer due to one addition. The daily challenge mode is a way for players to compete for bragging rights, both globally and among their friend’s list.

Every day, you can play one generated game and whether you win or die, your score will be uploaded to the high score list. This level can only be played once that day and a new one will be waiting for you tomorrow.

With such an interesting and focused design, it makes it hard to really pick apart Spelunky in terms of critiques, but I would like to discuss the two most often criticisms levied at the game.

The Circle of Death:

Spelunky’s mix of rogue-like and skill based design was designed explicitly to challenge the player. But a common criticism among people who play it is the game’s extreme difficulty.

Now Spelunky isn’t a difficult game in the sense that it asks you to do a lot, but that the rules of the game are designed to kill you. Spelunky, at many times is a frustrating affair.  It’s only a matter of time, but you will die and it will be entirely on the mechanics or the controls and not on your skill level. Such as an enemy getting a random hit that knocks you off a platform and into a death trap before you can recover and a lot more.

Having random or elements out of the player’s control kill them in a skill based game can seem like a game design sin and it can put people off of Spelunky. It’s far less frustrating to die in a game like Dungeons of Dredmor or FTL where you can put some of the blame on the bad luck of the RPG elements and randomization. However in Spelunky, all you have is your skill and the randomized nature of the challenges thrown at you. 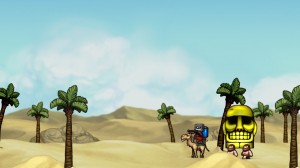 No matter how good you get, victory is still hard earned.

But what makes Spelunky so endearing is the fact that the mechanics of the game aren’t out to kill you, but everything in the world. In other words: Spelunky is fair by the fact that it is completely unfair.

And just like with any skill based game, the further you play, the more you can start to influence the rules of the game to your own will and use the tools of the world to your own advantage.

Now the other general complaint about Spelunky is that the game doesn’t have replayability, which sounds odd when we’re talking about a procedurally generated title, but I can see where people have a point. All the game’s challenges and possible threats are thrown at the player from the start and the game doesn’t grow on that regard.

And once you play long enough, you’ll notice that the overall threats for each environment, largely remains constant. You won’t run into yeti enemies anywhere but the ice levels for example. This is where having character progression could add some replayability by allowing players different builds and tactics for getting through the game, such as in Dungeons of Dredmor.

The Binding of Isaac really nailed the concept of replayability and progression. As the further you played and the more times you beat the game, more content was unlocked for the game to randomly place in the levels. Ergo, the more you played, the deeper the game got.

But in Spelunky the game actually loses some of its challenge as the more skilled you become, the game doesn’t compensate to provide new challenges or content outside of one hidden area. The only sense of progression that the game does offer is new character models that can be unlocked through play, but these are purely aesthetic changes.

Once you’ve beaten Spelunky, outside of going after the hidden area or being a touch masochistic, there really isn’t anything left for you to see. This is why the daily challenge concept was such a brilliant idea, but the lack of gameplay growth keeps Spelunky from knocking The Binding of Isaac off of the #1 spot for me in terms of replayability with rogue-likes.

Spelunky is really in a class by itself and its all the more amazing the game originally started as a freeware edition that you can find from the Spelunky homepage. While it may not be for everyone, it shows just how much creativity can come from the Indie community and that rogue-like design is not limited to RPGs.