Super Daryl Deluxe is as Clumsy as it is Clever

Super Daryl Deluxe has been in development for a few years since its kickstarter success in 2014. A game that is described as a “RPG-vania,” if you can stand the quirks of the game systems, there is a good game hidden in the weirdness.

You play as Daryl, a recent transfer student to the high school in Water Falls. Years ago, the two top students succeeded in bringing world peace, and then destroyed the world thanks to a mysterious book. You now live in a world where a corporation has turned the school into a brainwashing center, textbooks are more valuable than gold, interdimensional portals make up the classrooms, and everybody hates you.

The aesthetics are impressive, with a hand-drawn style out of ’90s animation. Prepare to see some trippy stuff as you explore the various sights and sounds of the school. The absurdity levels are high in this game; with each chapter taking us further and further away from reality.

The basic structure of the game is that you must complete a variety of tasks from the students and staff of the school. These quests will take you all around the school and guide you through the crazy story of the game.

Daryl fights with a variety of skills that you can assign at his real locker, or a happy floating locker (don’t ask). You are free to mix and match skills to the four attack buttons and one utility button. Once again, the animation of the game really sells the craziness of your attacks. You can fling lightning from your hands, summon whack a moles, and a lot more. 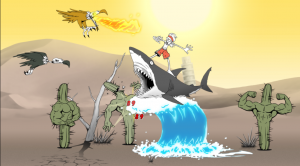 The skills are balanced around several stats. Some skills are high damaging, but have a long cool-down, while others may lose their effectiveness depending on how frequent the player uses them.

You can spend experience to upgrade skills; changing their appearance and utility while improving their stats. New skills can be purchased by finding old textbooks and hitting the level requirement to use them. The freedom to define your attack style is definitely the highlight of playing the game.

Combat is real time and on the floaty side, as enemies have no windup animation for their attacks. Due to the combat system being based on your skills, it can be hard to control Daryl and keep him from ending up in the enemy’s range. Another point is that you don’t have a dedicated defense move.

For all the craziness and greatness in Super Daryl Deluxe, the gameplay and design has some rough patches.

There is a lot to like about the game with the skill system, aesthetics, and story, but you will have to deal with some polish issues. The game could have used one really good quality of life pass to clean up some of the following issues.

Your quest log from the main menu doesn’t give you any details as to what’s required for that quest. To find that out, you need to go into the menu and assign it to your quick quest log on the main screen. The game’s pacing can also cause some trouble, as there is a habit of putting you into forced arena fights with no way of escaping. Not only that, but the game has a habit of changing the “main quest” haphazardly. You may think that you’re supposed to keep exploring the area you’re in, but you’re supposed to switch to somewhere else.

I also have to call out the gear system which felt like an arbitrary way of having the abstraction work against the player. There is a lot of equipment to wear in the game, but you only have three stats: Health, Defense, and Attack. The only choice you have to make is just wearing the highest valued gear. There are sets later in the game, but any set bonuses pale in comparison to just wearing higher quality equipment. 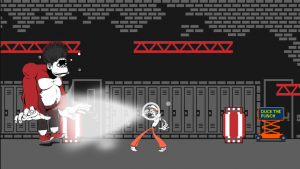 This is considered normal compared to the rest of the game

The leveling system of Super Daryl Deluxe is very similar to that of Borderlands, where an enemy who is too high a level compared to you is practically unbeatable. Get caught in a group of enemies like that, and you will be killed before you even have a chance to do anything.

While that’s annoying, it is made worse by one big point: There is no quick save or checkpoint system in the game. If you die after a major fight before you return to a save point, you will be forced to repeat the fight again. The developers were trying to give the game that old-school feel, but with the forced battles, this can lead to you losing progress.

The boss fights can also get annoying thanks to the floaty combat. I found that slow skills were useless for any major fight, because all the bosses are very mobile, and have high damaging attacks.

Super Daryl Deluxe may not be the most polished game released, but its quirky charm and insane story managed to keep me interested all the way to the end credits. The game is a solid first attempt as both a kickstarter and title from the new studio.

The Design Behind Dusk