Adult Swim Games has run the gambit of weird and diverse games on their service. Last year one of the developers: Dennaton Games released Hotline Miami, which became one of the standout titles in 2012.

Now we have the first time where a game featured on Adult Swim Games has made the move to the Steam platform with Super House of Dead Ninjas. Leaving gamers to ponder what version of ninja killing is best.

The story of Super House of Dead Ninjas as told by the comic/instruction manual has you descending down a massive tower to fight the demon that lives at the bottom. Making your way down the tower, you will be attacked by monsters, boss fights and a timer that must be replenished by power ups or death will come to take one of your lives.

Super House of Dead Ninjas is similar to games like The Binding of Isaac as it features a Meta game achievement system. Performing tasks like defeating bosses or surviving long enough will unlock new items and upgrades for subsequent plays. Some are random powerups, while others are equipment that you can choose before you start playing.

In the original version available on adultswim, the game came with two towers: one with a set end with the other one being an endless mode. With the paid version, the game has several new items, new bosses, level editor and an additional endless tower that can be played. 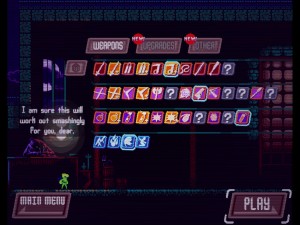 The unlock-able items and upgrades help give the game some replay-ability.

One thing to keep in mind is that the game isn’t truly randomized like The Binding of Isaac as each floor of the tower was crafted.

However, the order that they appear is the randomized aspect, with the new tower featuring more floor patterns.

In terms of design, the game is pretty basic as the game trains and rewards you for quickly killing your enemies and moving down the tower. The various weapons come with different attack damage, range and general usefulness.

Regarding controls, they can be a little floaty with a keyboard and I had plenty of times when I ran into an enemy trying to attack them. With all the various movement based obstacles, a game pad is a better fit for the game but it’s not unplayable, the only exception is with performing super jumps that require you to hold the down arrow then press up. This can be a little tricky to perform when in danger from attacks.

The big issue and question for people looking at Super House of Dead Ninjas is: Is it worth it to buy the full game? And I hate to say this but at present my answer is no.

It’s not a matter of game quality but of what content is added with the paid version and at this point I don’t see enough to justify spending money when the free version is available. When I look at a game like The Binding of Isaac that I paid around the same for (with the expansion included) I got much more value for my purchase.

Even with all the different rooms available, I’ve had plenty of cases where rooms repeated often in the same run. The new bosses while different, only show up in the new tower which requires you to find items in the main game to unlock access to.

In the end, it appears that the only thing that can stop a Ninja is another Ninja. Super House of Deadly Ninjas is a good game, but without more content in the paid version, the free one is currently the better choice for people looking for 2d ninja action. I do however reserve the right to change my opinion based on if the developers continue to support the game with more content.