Super Hydorah is a Love Letter to Shmups

Developer Locomalito has become one of my favorite developers in recent years. His MO is creating elevated takes on classic game designs, with his last full release Cursed Castilla being a love letter to Ghost and Goblins. This time around, we head into the shmup genre for one of the best retro throwbacks this year.

The story of Super Hydorah is a simple one: An evil empire is invading and you’re the only one who can save the galaxy. Locomalito designed the game as an elevated take on shmup games; not bullet-hell, which is its own thing.

At the start of the game, you’ll begin with just a regular blaster. At the end of most levels, you’ll unlock either a new main, sub or special weapon. Getting upgrades and shields are vital to surviving the game, as you’ll lose a power level if you die. As you unlock new weapons, you’ll be able to select your load-out at the start of each level.

Unlike his previous games, Super Hydorah allows you to select multiple levels on your way to the final battle. For players wanting to push themselves, the best ending awaits those who can beat the game on a single continue.

From looking at screenshots and the video below, Super Hydorah may not look all that amazing, but the design of the game speaks volumes about the craftsmanship.

Do a Barrel Roll:

If Super Hydorah was released back in the heyday of the shmup genre, it could have been considered one of the best examples of it. Every level introduces new enemies and situations to fight. The bosses are all unique and hit that right level of challenge. 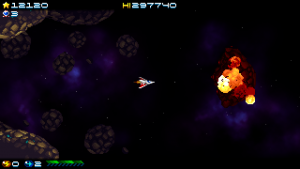 Outside of one optional level, all the challenges felt fair for the genre. Even though you are going to be flying through each stage, the environmental obstacles will test your maneuvering. And just like his previous games, the music is incredible.

There isn’t much to critique when it comes to Super Hydorah. Besides the game being on the short side, I have one gameplay issue. I found that sub weapons that attack above and below your ship to be too vital not to have on for the most part. There are plenty of sections that are trivialized by being able to attack like that.

Also, while losing your weapon levels is annoying, having your speed lower can be brutal in some sections. There were cases when enemy shots and ships were moving so fast that it became very difficult to dodge at the basic speed.

In terms of level design, I felt for the most part that the checkpoints and section lengths were fair. There was one level as mentioned that was a bit on the frustrating side to play.

Nevertheless, this is another amazing title from Locomalito. For fans of the shmup genre, this is easily one of the best examples of it.