One of the final games I bought for 2013 was The Swapper: An Indie action puzzle game which was helped funded thanks to Indie Fund. With an unassuming title it was a game that was discounted by a lot of people. But after playing it, The Swapper turned out to be my favorite game of 2013 thanks to an amazing focus on puzzle design.

The Swapper takes place on an abandoned research facility that you have stumbled upon after crashing in an escape pod. After a few minutes of play, you’ll discover the device known as the swapper. It gives you the power to create up to four clones of yourself and transfer your soul to any of the clones.

The clones themselves will directly mirror your actions once created: So if you run to the right and jump, all clones will perform the same action regardless of their position. As the game goes on, colored lights are introduced that determined where you could create clones or swap positions and are integrated into the puzzle design.

The story, written by Tom Jubert who also wrote for FTL and Penumbra is an interesting tale that deals with identity and self. How do you define what makes an individual? What is the value of life and can you put a greater value on some lives? These are a few of the questions that The Swapper delves into and talking more would take us into spoiler territory. 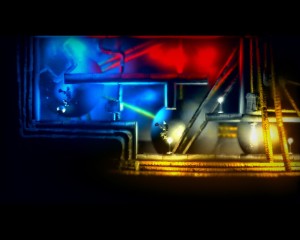 Different lights affect how you can use The Swapper and are your main opposition when it comes to puzzle solving.

Progression in the game is straightforward: There are switches that are locked behind security that requires the player to collect enough security orbs to progress.

These orbs just so happen to be the goals behind the game’s puzzles. Going through the game, you can skip puzzles as long as you have enough orbs to keep going but to finish the game, you must complete every puzzle.

It’s the puzzles where The Swapper’s brilliant design shines through and why I fell in love with it.

The Swapper’s puzzle design reminds me of Portal in how a basic system of rules is used, expanded and challenges the player to complete a number of tasks. There are no upgrades in The Swapper or new moves to learn, instead the basic mechanics and rules remain constant from start to finish.

Where the challenge comes in is how the developers with each puzzle force you to think differently about said rules. Some puzzles are about figuring out the best positions for your clones. While other ones challenge you to perform a task with the clone’s mirroring function providing an obstacle.

Later puzzles do a great challenge of forcing you to use less than your maximum amount of clones to solve a puzzle. So while a puzzle seems incredibly easy when there are five of you, but the challenge is doing it with only four.

The developers did a superb job of keeping the same mechanics but providing different takes with the various puzzles. There were several times when I thought a puzzle was un-solvable to come back after a break and figuring it out.

I only have a few nitpicks about The Swapper and they are mainly the same problems that any action-puzzle game hybrid have. First is that the game doesn’t have much replay value when it comes to puzzle solving as the solution doesn’t change.

Second is that the game does make use of platforming and there were some cases where it was hard to tell if you didn’t have the right solution or you were messing up on the execution.

The Swapper was a great game and delivered an excellent experience despite only being a few hours long; showcasing the strengths of great puzzle design in a moody stylish package.