They Are Billions Stops Just Short of Greatness

They Are Billions is one of those ideas that on paper sounds like something we should have gotten years ago. Take the resource management and base building of an RTS and put the player up against an endless army of zombies waiting to tear it down. With the game finally out of early access, what started as an amazing concept still is, but there’s not much else to it.

They Are Billions is split between the survival mode that was the main mode during early access, and the game’s new campaign (which we’ll talk about in a minute). The story is that humanity fell to a zombie plague years ago and the remaining survivors use steampunk cities and technology to try and stay alive and fight back.

The game has a great look with its kind of cel-shading aesthetics, and the game engine does not let the title’s name down. The map can support hundreds of zombies at a time, and the screen can fill up with many more than that.

As for the gameplay, TAB is a turtler’s dream as defense as hunkering down is all a part of the experience. A match can last a certain number of in-game days (that the player chooses). Your mission is twofold: gather the resources that you need to expand and maintain your base, while also constructing the necessary defenses and military units to keep you alive.

You’ll construct buildings to gather wood, food, power, iron, stone, and oil. Gold comes in based on the number of homes you’ve constructed which also gives you workers. Everything that you build will drain one or more of your resources — leading to a case of building out to then must spend time recouping what you just consumed.

Major tech improvements require you to build research buildings that unlock new economic structures, units, and defenses. That last one is very important, because the undead are coming, and they get more advanced as time goes on.

On every play of survival, there are always undead on the map of the first three varieties — slow, fast, and durable zombies. Clearing them out allows you to then set up and expand in the new area. The twist of TAB and one of its more polarizing elements is what happens when zombies attack. 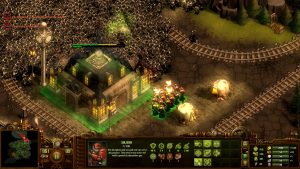 once your defenses go, there isn’t anything else you can do

If a zombie hits any building enough times, not only does the building stop working, but it spawns more zombies who then proceed to attack more. If any zombie gets into your base, it can be completely infected in seconds.

The major threat of the game comes when waves start appearing. The game only gives you a warning as to what day they’re going to appear, and then a direction on the day of, but you do not know how many zombies are coming and what types. As the waves go on, new zombies start to appear that will rip apart your basic defenses.

Even though the game may look like it’s on the slower side of RTS design, you still need to move and respond fast on every map. There is always a race to build defenses and tech up if you want to have any chance of succeeding. There isn’t anything you can do if the zombies break through and start infecting all your structures.

Given the ironman nature of the design, this leads to many situations of a player having to repeat the same starting hours of play to get back to where they were, try it again, and possibly must do the whole thing over again.

For a game that’s built on defense, the game does a horrible job of training the player on how to do just that. This is a game where if you think you have enough defense, then you don’t. It’s very time consuming to set up defenses as even wooden structures still need to be connected to your electrical grid.

Once zombies start coming from multiple directions, you will have to make sure that all sides of your base are equally defended. What makes this frustrating is the very fact that you’re going to be setting up your defenses the exact way on every play. This is not like a tower defense game that affords different strategies based on your options. You are not able to “lane” or corral the zombies — it’s just a giant wall of enemies smacking into your wall of defenses.

Due to how resources trickle in, you must constantly wait to set up defenses or build units — with higher tiered options costing you major resources. It never felt comfortable to quickly get defenses going, which is kind of important when you’re in a race.

Now, some of you would assume that the game’s campaign would be the way to go to learn how to play TAB, but that is not the case.

The campaign sounds great on paper — challenge the player with a series of fixed maps while letting them unlock new elements via a persistent tech tree. Unfortunately, there are a few major design issues here.

The first one is that playing the campaign will not help you at all for playing the game on survival mode. The campaign routinely tasks you with building massive amounts of colonists, who are all drains on your resources, alongside the defenses needed to fight back against the hordes.

The other problem is that progress in the campaign is fixed, but the tech tree allows the player to choose their own path. Because you can’t respec, most players are going to run into the situation where they’re out of research points to unlock something they need, and they can’t make any progress in the campaign. It would have been better to let the research points be used for passive bonuses, but reward the player with unit and structure unlocks by finishing missions.

The campaign’s unique levels involve hero missions like StarCraft or Command and Conquer, but without any charm or interesting elements to it. They’re repetitive, require the player to play “Where’s Waldo” to find interactables, and get boring fast. The final type of missions are “hold the point” battles where you must use your empire points to mount a defense against hundreds of zombies. Again, it gets repetitive fast without a lot of strategy to it.

It’s a shame that I have so many negatives about the game, as They Are Billions core gameplay loop is solid.

A One Trick Zombie

They are Billions is one of those concepts that I fell in love with from the very first build and is one that I’m surprised no one else beat the developers to making in the past. However, given the growth from early access to 1.0, the game very much feels like it had one great idea, and not knowing where to go with it.

Given the repetitive nature of the design, a trophy room achievement system would have been great, and making things more varied from a scenario standpoint.

In the end, I want to see the developers continue to grow this gameplay, as the foundation is there, but there needs to be more things to do than wait out the zombie hordes at the gates.

The Long Road of Game Development with One Man Indie

Why Nintendo Remains the King of 3D Platformers