I can’t believe it’s been so long since we last talked about a brand new adventure game from Wadjet Eye and Dave Gilbert. After falling in love with the Blackwell series, I, and the rest of the fans were sad that the series was all wrapped up. Since then, Dave has been hard at work on his next dream project with Unavowed, and for fans of strong writing and adventure design, it does not disappoint.

Unlike Dave’s previous games, Unavowed does not have you playing as a named character. Instead, you spend the first 10 minutes choosing your character’s gender and origin story. The origin story is a small vignette that introduces you to the basic gameplay.

Regardless of your origin, it ends with your character being possessed by a demon for an entire year. You are freed by Eli and Mandalla who work at the Unavowed agency. Their job is to protect New York from supernatural threats, and since your personal life was destroyed, you join them to figure out what the demon wanted.

From there, the structure is similar to the Blackwell series; with you solving cases in localized areas. Your origin story comes into play with dialogue options that can get more information out of people.

Since this is an adventure game, expect to solve a variety of puzzles, but there is more to things this time than just blowing on paper with Joey.

For each case, you are free to choose two teammates to take out into the field with you; the one restriction is that Eli or Mandalla must be one of the partners. Whoever you chose will have their own custom dialogue they’ll use and will play off of the other person. 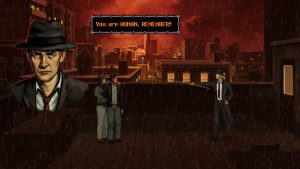 Besides that, each person can be used like an item to solve the puzzles at hand. They can also advise you if you’re stuck. In each chapter, there will be puzzle solutions unique to a specific teammate to help with some replayability in the game.

While you will still be performing the same puzzles and going through the same locations, how you do it will differ. Regardless, the game is designed around any combination being able to get through each chapter.

In terms of puzzle design, the puzzles do feel a little easier and quicker compared to Dave’s other games.  Because the main character doesn’t talk, it allows you to quickly sweep over an area to see what everything is. Even though the main character is silent, that doesn’t make the story boring.

As with the Blackwell series, a major positive for Unavowed is the writing and character designs. Each member of Unavowed feels like a fleshed out character that has been around for a long time. This is helped further by having the characters play off of one another while you are out on assignment. Little quirks like Eli and Mandalla talking like an old married couple helped to give these characters depth.

The lore of the world grows with each case, as you start to put things together as to what you were doing for the missing year. The game does a really good job of selling the “lived-in” nature of the world and characters. Each case leads to bigger and more disturbing discoveries about what’s been going on; with the overall goal to figure out what the demon did to you while you were possessed.

Perhaps the biggest departure from the Blackwell series is that Unavowed is a lot more mature. While both series deal with issues like death and the afterlife, Unavowed does not pull its punches. There are far more gruesome scenes this time, but the game doesn’t get gratuitous about it. While there is humor in the game, it acts as a counterweight to the cases that you work on. 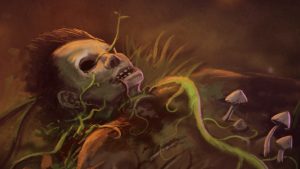 Don’t expect a lot of happy endings this time around

Going into detail would be a major spoiler, but if you found some of the resolutions in Blackwell to be depressing, then you may want to bring some tissues with you on this one.

Everything that I enjoyed about the Blackwell series is present with Unavowed, and it doesn’t leave me with much to complain about.

In terms of issues, I don’t really have any major problems with Unavowed. If you’ve played a previous game from Wadjet Eye, then you should be used to the quirks of the adventure design. While the system of choosing your partners was a great idea, I would have loved to have seen more permutations that could impact the story.

The majority of your choices does not change how the story comes to an end, but are simply soft choices that help to flesh out how you see your character. If you’re expecting Mass Effect-levels of customization and story choices, Unavowed does not have it.

There isn’t a lot for me to talk about in terms of Unavowed, and that’s because if you’re a fan reading this right now, you’re probably going to buy this game anyway. If you’re new to Wadjet Eye’s games, this is a great place to start; with the puzzle design and storytelling balanced well.

For more about Unavowed, we have a podcast post mortem up now.

The Good and Bad Sides of Video Game Addiction