Unsighted by Studio Pixel Punk is a metroidvania take of the high-speed play of the indie classic Hyperlight Drifter. Featuring impressive pixel art and combat, the game could easily stand as one of the better metroidvanias released and a must-play. However, one design decision is often all it takes to raise or sink a game, and I feel that the game’s story clashes with the gameplay in a way that ultimately hurts the design.

You play as Alma, an automaton built to protect their fellow automatons in a ruined city. When a giant meteor containing anima, the source of the automaton’s sentience, is trapped by a human-created tower, it’s up to them to roam the destroyed city to find the means to destroy it, save their friends, and their lover.

The city is full of different loot, enemies, and quests to find. You are free to mix and match your weapons and gear however you see fit, equipping two at a time. Combat is very fast-paced, with only a fraction of a second for I-frames when hit.

Progression is built on finding and crafting new weapons and finding new items in the game’s five dungeons that give you new movement options. You can also find, craft, and equip chips that provide a host of passive bonuses including raising your total health and stamina gauges. There are a lot of ways of playing through the game, including for those skilled enough to play it in reverse dungeon order. 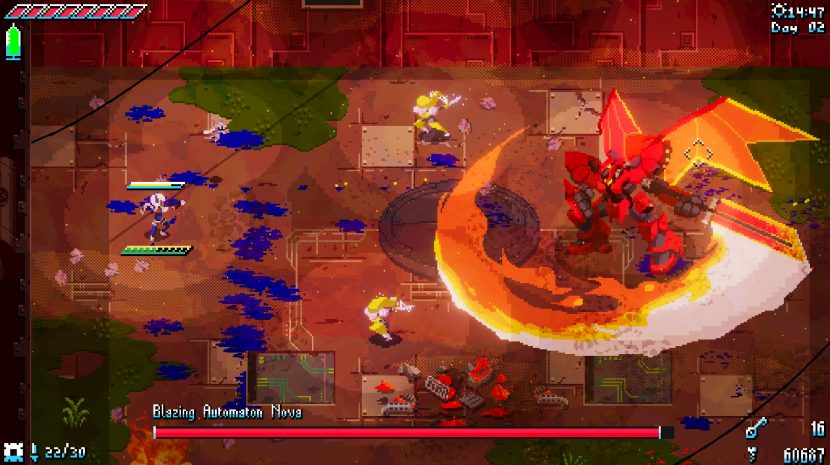 combat is about high speed play and getting proper parries

This is possible thanks to the game’s ultimate defense: the perfect parry. When enemies flash red, you can parry their attacks and put them in a stunned state (heavier enemies will need multiple parries in a row). While stunned, enemies will take a lot more damage and it is possible to even down bosses with a few critical hits.

There is a lot to explore in Unsighted, but unfortunately you aren’t quite given the time.

After the prologue you are introduced to the game’s real test — the real-time countdown. Without a constant supply of anima, the automatons will go feral, or “unsighted.” Every character you can interact with has a countdown timer indicating how many hours they have left. Once this starts, the countdown will not shut off no matter what. While there are plenty of NPCs who are simply there for story, the vendors, and characters who provide useful services are also running out of time.

The only way to keep people alive is to find the limited resources of meteor dust hidden throughout the world to give them an extra 24 hours. Alma themself is also under the same condition, and you may have to decide to keep them alive by sacrificing your friends. The twist affects the ending that you get, with it being modular based on who lives or dies at the end. It is possible to keep everyone alive (and a secret ending that even goes beyond that), but it will come at the cost of both time spent in the game and your ability to upgrade and find more resources.

The decision to create a time-based Metroidvania is an interesting one, and one that I don’t think quite meshes with the gameplay here.

As anyone who has played a metroidvania knows, the genre is built on replaying areas and exploring with newfound upgrades. With Unsighted, you don’t have the time if you want to keep characters alive to return to areas. 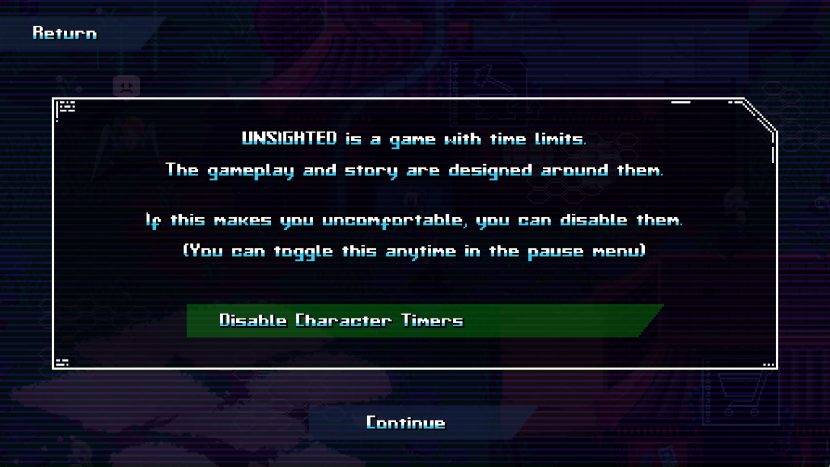 the time limit is an important part of the design, but adds stress and frustration to it

With that said, I must point out the following: You can disable the timer at the start of the game. Doing so greatly lowers the stress and challenge of the game, as so many of your choices and upgrades are going to be dependent on who you keep alive. However, having it be the default element of the game I feel is going to stress out a lot of people who will not want to deal with it.

If you’re playing the game casually, it can be frustrating to get stuck at a section or puzzle, or just trying to experiment with a new weapon when you see the timer continue to countdown. I can’t stress this enough, but Unsighted is on the harder side of metroidvania games due to its combat. Without health upgrades, it is possible for larger enemies to one-shot you at full health. And these issues are all examples of problems for newer and first-time players, while experts will be able to shrug them off.

I had an issue with the parry window in some fights. It felt like the warning of the incoming attack (enemy flashing red) was not consistent among enemies. Some of them if I waited for the tell, the parry animation would not come out in time to stop it.

Unsighted is an example of a game that I think is going to have a lot of its churn come from those running into these issues early on. For people who stick with it, this is a great game with a lot of value in terms of content.

I think Unsighted is a fantastic game and one more people need to try out. You can tell that the developers not only understood action games, but also what drives people to play them. There are multiple achievements around breaking the game, the as-for-mentioned reverse order run, and more. Beating the game unlocks the hardest difficulty, boss rush mode, and even an action roguelike mode.

I would say to anyone reading this who is interested but put off by the difficulty and timer I’ve talked about, just go for it and don’t care about it on your first run. The developers spoke about wanting people to replay the game, but I think they could have conveyed the message stronger about not worrying about the timer. If you’re looking for a challenging action game, Unsighted is an easy recommendation.

This was played with a press key provided by the developer