Numerous times in the past I’ve talked about the importance of good loot design when it comes to ARPG or RPG game design. Because loot is tied to progression it is vital that the developer gets it right in order to keep someone invested in playing. For today’s post I want to look at two very different games and how they both have opposite problems when it comes to loot design.

Before we talk more in detail, here is a primer on both games for those who haven’t played them. In Diablo 3, loot generation is randomly generated based on a linear foundation of loot tables. The higher your level, the better the loot table you’ll get items from. This also means that all loot and enemy stats are constantly scaling and keeping pace with your level.

The primary attribute of your character will determine the viability of any loot that you find along with special affixes that give them unique properties. Getting higher tier loot is done by killing elite enemies, bosses and completing rifts, with crafting as a side.

Loot generation or variety is based on the following properties:

The Borderlands series has always been about having a lot of guns to choose from. Beyond just the weapon types, the game’s fictional manufacturers also change the properties of the guns and have unique affixes to it.

Similar to Diablo 3, equipment comes in rarity tiers which determine additional affixes or boosted attributes. Getting rare weapons is a bit harder as enemies will drop basic gear with a slightly higher chance from elite enemies. Regular and special chests hidden around the world are the best chances at getting rare goods.

Because of how much the weapon stats have to be taken into account due to the player’s skill being part of the game, it makes attribute generation very important. Here is the number of factors when it comes to a Borderland’s gun:

You may notice that both games have the same number of attributes, but the thing to realize is that are a lot more variables category for Borderlands than there are for Diablo 3. In Borderlands, each type of gear has its own unique set of attributes which are generated at loot creation which are also based on a scale.

The problem with loot generation between these two titles is how each game’s philosophy makes it harder to progress in terms of loot.

With Diablo 3 is that the designers made the loot tables very rigid in an attempt to control progression. This means the chance of finding upgrades is very small due to the limited scales of attributes. As you’re playing through and leveling up, the loot table that determines the gear you find also grows. However it only grows after every few levels so that there is a big difference between level 4 gear and level 8 gear. 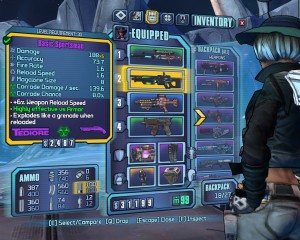 The loot in Borderlands is so diverse that it’s hard to find the items you want or upgrades.

But what happens is that once you find one really good piece of gear, it becomes harder to find something to replace it until you reach the next loot table.

And once you hit the level cap and only have one loot table, finding better gear becomes very annoying as you need to find something that has the affixes you want and have them scaled higher than your current gear.

In this way Diablo 3’s loot design is so rigid that finding better gear becomes harder and harder. But Borderlands 2 has a different problem.

The loot generation in Borderlands is all about variety thanks to the different gun types, rarity and manufacturers. You’re going to find a ton of weapons while you play, but the problem is finding guns that you can use. I can’t tell you the number of times that opening chests gave me nothing or killing bad-ass (Borderland’s elite enemies) had nothing of use.

The big question is what can be done to move these two series away from their respective loot problems. For Diablo 3, I think there needs to be a few more loot tables similar to what they did at launch to give players at max level a chance at finding better loot that isn’t so rigid. As it stands, the end game is dependent on finding legendary or set items for improvement, but their drop rate is so low combined with finding something that has the stats you need. 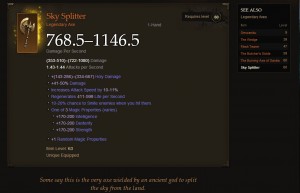 While in Diablo 3, the range of loot that you can actually use and upgrade from is very narrow.

With Borderlands, there either needs to be more chests or go the Diablo route and give enemies a chance at dropping rare loot.

The grinder introduced in the Presequel that lets you take weapons you don’t use and destroy them for something better was a good start and giving more control to loot finding. But again, with all the variables available at loot generation, still makes it too out of control.

Loot table design is one of the trickiest aspects when coming up with RPG systems and problems arise when there is too much or not enough loot to go around. Both games have fully committed to their systems and only time will tell with how the developers will improve things.

Dungeon of the Endless — Going Up