The Limitations of Leveling Systems in Game Design

Leveling has been an essential part of game design and progression since the origins of RPG design. However, I’m finding that modern games are missing the point on leveling design, and I wanted to share my thoughts on how we may have outgrown the original use of leveling.

Leveling and the act of leveling up have been cornerstones of progression and balance in any game with abstracted systems. The lore behind leveling is that it is a way of abstracting how someone becoming more skilled at what they do.

From a gameplay standpoint, leveling provides several essential functions to designers and players. As the designer, you can use the leveling system to properly pace your storytelling and challenges. Many MMOs and RPGs will set up stories and areas based on the player level — allowing for a hopefully smooth transition from story beat to story beat.

Leveling also works as a way of balancing the player’s abilities and how they relate to the world around them. If you’re going to introduce some high-power skill at the level cap, then you don’t need to worry about balancing early areas around said ability. You can also use the player’s level as a way of measuring the average stats of their character — making areas easier or harder to compensate.

From the player’s point of view, leveling provides an easy to understand measure of their progress. There’s also the psychology of getting the rewards of leveling up as a form of motivating the player to keep going. Over the last decade, more games have been integrating RPG systems into action gameplay loops, and that created a new form of progression.

The first examples of combining action and abstracted progression would be the ARPG genre with the likes of Diablo and so on. In these titles, the player had full control over their character in terms of movement and attacking but were still held to the RPG layer in terms of abstraction.

As the RPG genre evolved, we started to see games present themselves as more action-oriented, but still RPG in design. Modern entries like Mass Effect, the Witcher, Fallout 3 and 4, and so on, were controlled like an action game, but success or failure was built into the abstraction.

From the other side, we started to see action-based titles use RPG leveling and progression as a way of extending the gameplay loop. Call of Duty with its leveling to unlock new perks and weapons, God of War with a gear level, The Division, and of course the big example: Borderlands with its “role-playing shooting.”

With these games, all gameplay is action/player skill, but the RPG layer restricts what the player can do. It doesn’t matter how skilled you are if your weapons are too low level, or enemies are too high level. In God of War 2018, the game was explicitly designed so that if you fought an enemy who was four or more levels above Kratos, they would always kill him in one to two hits.

The use of a leveling system allows designers to extend the lifespan of these games that were traditionally limited by the player’s skill. However, with this adoption of RPG leveling, it also highlights the limitations of the system.

Leveling in RPG games works because of how the entire game is abstracted. Player skill is not as much of a factor playing a turn-based RPG compared to an FPS. However, when player skill is the focus and the RPG layer is on top, the different game systems clash with each other.

You lose the psychological motivation behind leveling when the player gets nothing for it. In the Division series, leveling doesn’t mean anything from a gameplay point of view once the player has their build established. At that point, progress is only measured by their gear. Whenever the RPG layer affects the scaling of enemies and player abilities, that does not change how the game is being played. Many times, it felt that I already mastered all the game’s systems, but there were still 20+ levels to go before I could access all the content.

In God of War, the combat became very repetitive because of how few legitimate options there was, while the game focused entirely on the gear level. As we’ve talked about, if the player hits for 5 points of damage or 5,000 but is doing the same thing regardless, then that is not an example of progress.

By using RPG scaling, it allows the designers to make encounters harder without making them more interesting. At the endgame of Borderlands 2 and into new game +, the developers raise the enemy stats so high that even if you were a great shot you were not able to easily kill them. Many times, normal enemies would beat you through sheer force if you didn’t get lucky and find the right guns to use against them.

Speaking of the endgame, the whole point of having a leveling system/progression is to provide far more replayability due to the endless scaling, but that has a limit. The thrill of growing stronger will run out if the world doesn’t present a meaningful challenge. Playing Diablo 3, once I got my full set done for a class, I stopped caring about going up in torment level because there was no further point where I could make my character stronger.

With that said, both Diablo and the Division did do something that I like as an alternative to traditional leveling systems, and what I want to see further developed.

Despite Diablo and the Division having a leveling system at the core of their progression, they also feature, for lack of a better term, a “world tier system.” Starting from patch 1.04 and continuing into the expansion, Diablo 3 features “adventure mode” that allows players to tune the difficulty to their specifications.  The higher the difficulty the game is played on, enemies have higher stats, gold and drop rates are improved, the player gets more experience, and specific sets will drop at the torment levels once the player hits 70.

The Division features a similar system but at the endgame. Once the player hits level 30 and finishes the story, they start to advance the world tier. At each greater tier, the strength of all the gear drops goes up and the enemies become stronger.

Both systems feature elements that I like and dislike. In Diablo 3, I liked how the system is there from the very beginning, unlike the Division. However, once you hit torment 1, the game will not introduce any new challenges or rewards that are unlocked at the higher tiers.

With the Division, the way it is set up does allow for endless scaling of its power curve. I like how they introduce a new faction of enemies that show up when the world tier system unlocks. Unfortunately, having to grind 30 levels before you can use this system hurts the game in my opinion. 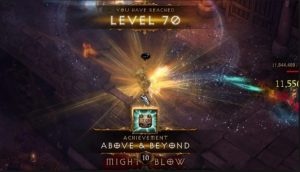 What I want to see is a game that fully embraces this idea of player-modified difficulty and run with it in terms of replayability. Imagine a game that each new tier changes how the game is played: New enemies, new situations, and most importantly: new rewards.

If you can’t do that, then there’s one important point about leveling systems I want to touch on.

The Right Number of Levels

With games trying to introduce leveling systems into action-based design, many feel that the more levels make the experience deeper. However, I want to comment and say that isn’t true and just pads the game out. The player should never actively think about leveling and instead focus on playing the game, and there are two ways of doing that.

The first is that every level up should give the player something new: A new power, functionality, utility; anything that changes how they play going forward. The leveling curve in Diablo 3 is perfect in this regard — every level gives me a new toy to play with.

The other point is that you need to be mindful of how progress relates to the main content in your game. If the player completes every story mission, then that should move them through the leveling curve. It doesn’t matter if your game has 30 levels or 100, the player should never be forced to stop moving through the content because they’re not at the right level.

What I loved about Guild Wars 2 was how everything in the game always scaled towards your level in terms of experience and rewards. At no point during the leveling curve did any content become useless to do. Thankfully games have adapted scaling of this kind in recent years and that has helped to cut down on grinding to some extent.

Get to the Good Stuff

Some games treat the leveling curve as simply a gate that the player must get through before the “real game starts”, and others see it as part of the experience.

Traditional leveling just doesn’t work for me anymore and doubly so for titles that are built around action design. With reveals of the next Borderlands happening now, I hope that the looter shooter leveling and scaling has been improved.

For you reading this: Do you find leveling systems still holding your attention, and can you think of a better way?