If you’ve been living off the grid lately, you most likely missed the takeover of Pokémon in the US (and soon, the world). Last week, Pokémon Go was released on mobile devices and things have not been the same since. Pokémon already became a global hit once, and this time, things are looking to go even further. What makes this so interesting to examine is how the mobile platform is helping the takeover.

Mobile technology has been a major factor in raising accessibility of games to non-gamers. In the past, you needed the handheld and the game for everything to work. The rise of smartphones has allowed developers to bypass that need; everyone already has the phone to begin with. Today, it’s as easy as downloading the app and you’re done. Throw in the fact that it’s free to download and you have an easy means of getting your game/app into anyone’s hands. 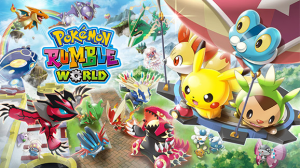 This isn’t the first mobile Pokemon game, but it’s definitely the biggest

Pokémon was already an accessible series to begin with, and Pokémon Go removes what little barriers remaining. All you need to do is walk around and you’ll be alerted to Pokémon in your area. The game uses the layout of your area and major surroundings, so you’re actually exploring your town.

The gameplay of catching Pokémon has been streamlined, and it’s now more about the catch and the hunt than the battle. It’s the fact that the game is tied to something else that also helps matters.

The use of AR as a spiritual sequel to Ingress also helps. While Pokémon Go features the same basic principle, being attached to the Pokémon brand gives it far more reach and pull.

Another major factor in bringing non-gamers to games is essentially gamifying time. The non-gamers are the ones who play these games along the way to other activities. They’re time killers; things to do while on the train or going around town. This makes Pokémon Go perfect in that regard, as you’re tying exercise and traveling to something else. 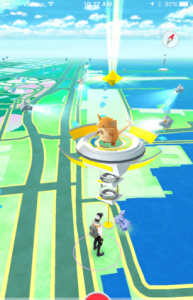 This sounds crazy to traditional gamers like myself, but you’ll be surprised with how willing people are to do something when rewards are on the line. Pokémon Go in the last week has gotten people out of the house and exploring their neighborhood, meeting new people and of course: Hunting Pokémon.

The beauty of these games is the fact that you don’t have to pay attention to them, but you want to. This is part of the same allure as the clicker/idle games: You don’t have to watch them once you get going, but you do anyway. Mobile games also are designed to keep you playing and engaged, which takes us to the next point.

Mobile games have common design philosophies meant to keep someone playing and hopefully spend money. Pokémon Go can be played for free, but it has the same hooks that you see in other F2P mobile titles. You earn currency in-game that can be spent on items and such, or spend real cash for premium bonuses for special options.

As with any F2P game, you don’t need to buy anything, but they do help speed up the gameplay or give an advantage for playing.

The game features an achievement system to reward players and keep them going. There are teams, competitions, and ways to get players invested in the game. While the game doesn’t change as you get deeper in, the hook is so strong that people want to keep playing.

It also needs to be mentioned, but the social aspect is a factor too. You can take Pokémon selfies along with setting up gyms to attack and defend. My twitter feed was basically Pokémon pictures for the first few days of launch.

Monetization options are there and another part of the mobile design

Pokémon was already very addicting with the act of filling your pokedex, now you tie in rewards and other mobile hooks, and you got addiction personified. But there’s still one more major point to talk about, and this one is the biggie.

Long-term game design is becoming more and more popular these days. Taking a game and extending it for months or even years can mean big profits for the developer/publisher. In the mobile market, you have a lot of leeway in continuing to grow a popular game. Since the base mechanics are already simplified, it’s easier to add more content and keep the gameplay loop growing.

Pokémon Go has a scary number of ways to keep growing and going. They are already tying important landmarks in with the pokestops, but imagine if monuments had unique Pokémon attached to them. You could simply add a small graphical detail and make special variations of different Pokémon. There could be themed Pokémon for each country in the world; further making trading all the more important or the need to travel. The point isn’t that there is a game mechanic tied to it, but that it’s unique.

We can take this even further: Now picture if special Pokémon could be made available if you fly certain airlines and use their Wi-Fi, or visit specific stores. Hell, you could have special Super Bowl-themed Pokémon that only people who visit the Super Bowl can get once a year. I was having a conversation and we talked about if they had unique Pokémon at voting booths or if you vote for specific people. 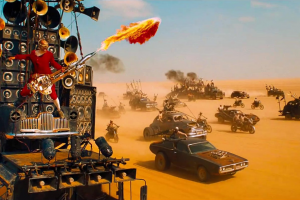 Pokemon Go in one year’s time

You may think that sounds crazy and it is, but you cannot doubt the fact that this can influence people. Marketers have been doing this for years with special promotions, and Pokémon Go has the feedback loop to keep going and going.

And it goes without saying, but every new Pokémon game release means more Pokémon for the collection and more content for Pokémon Go.

The end as we know it:

Pokémon Go is just layer after layer of addiction. The combination of Pokémon’s inherent hooks with the mobile market is just a match made in Heaven.  It’s not only managed to get mobile gamers interested, but people who never even played Pokémon to begin with. As of this moment, it hasn’t been rolled out worldwide yet due to server issues, but it will soon.

Considering how big the original Pokémon release was, my money is on this being the incident that takes us into Mad Max times. If you’ll excuse me, I’m going to go find a cave to get set up in for when we’re all driving modified cars in the desert.

Gambling in Games : Debating The Market of Digital Goods