In between all the arguments over Steam vs. Epic, people talking about the Apple Arcade and Google Stadia, everyone (including Valve) has missed one of the biggest features to drop on Steam and how it could change everything about indie development.

Valve has recently released a feature called “Remote Couch Play” onto Steam. The technical details are unknown currently, but what it does is allow a user to essentially share their screen with anyone on their friend’s list and play a game with them. While that part is nothing new, the important detail is that this works for games that have no online multiplayer feature.

The system essentially tricks any steam game into thinking that the other person and their peripheral of choice are in the same room; turning any local coop game into one with online multiplayer. The game is streamed from the owner’s PC to their friend or friends playing. This only works for games with same-screen or split-screen multiplayer.

The reason why this is massive has to do with one of the oldest lessons developers have learned over the years.

Multiplayer design is a topic way too big for this piece, but one thing is for certain — it can be very difficult to implement correctly; let alone online multiplayer. For many smaller devs, the work that would go into the building, optimizing, and making sure the online architecture is stable, is beyond their scope/budget.

Not only that, but if online multiplayer isn’t being thought of early in development, that further increases the difficulty of implementing it in a title.

The difficulty also scales based on the genre that you’re working in. For a party-based game where everyone occupies the same screen, that is easier than trying to set up the netcode for a reflex-intensive action game or platformer.

The sad part is that there are many titles that would have been enhanced with online multiplayer released this decade, but was either never implemented or done too late to help the sales. Full Metal Furies by Cellar Door Games had a disastrous launch because the online mode wasn’t fully implemented, and the developers spent several months post-release to add in that capability.

Many innovative games from the indie space have tried to do interesting things with multiplayer, but end up in a situation where they have unique gameplay but aren’t able to create an online multiplayer architecture around it.

And as we said further up, the cost of developing a mode may be too high to justify spending the additional time and money adding it in after release. If you spend those extra resources on a mode that most of your fans won’t use, or it’s not considered good enough, then you are essentially throwing money away.

With all that said, therefore remote couch co-op is not only a huge deal, but a major incentive by developers to go onto Steam.

The digital store war between Epic and Steam is still going on and doesn’t show any signs of slowing down. Epic is trying to improve its storefront to be comparable to Steam, while Valve is looking for ways to make Steam stand on top.

With remote couch coop, this is a feature that is huge for developers and needs to be talked about more. What Valve has done is provided every indie game with local coop with free online multiplayer. Suddenly, a lot of games released this past decade can now be enjoyed with friends from anywhere around the world; improving their value.

For developers releasing their game on either steam or epic, they now must choose between a platform that gives them online multiplayer for free. What’s important is that remote couch coop works through the Steam UI and not the game itself; meaning that the users must all have Steam in order to use the feature.

As another interesting point, this also means that developers will have to make sure that their local coop UI and controller binding UI are working properly and are easy to use. During our tests of it, some titles made it very hard to use different controllers or keyboards.

While this is amazing, there are a few downsides we need to point out about remote couch coop.

Cracks in the Couch

First off, remote couch coop only works for games designed with a local coop mode to begin with. The feature itself does not create multiplayer, and if your game cannot be played comfortably from a single or split screen, then it’s not going to work for you.

Bandwidth may be the biggest determinant to using remote couch co-op depending on connectivity and distance. While the game is “being streamed” to all the players, everyone’s internet connection is still a factor in terms of delay and latency. We had a case where one person started to have internet issues and it messed with everyone playing it. 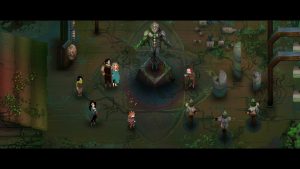 That means the more players you’re trying to connect, the more demanding it’s going to be for everyone’s internet. In a way, it’s kind of like a client: host server architecture, as opposed to everyone using a centralized or official server.

With that said, it’s also important to mention that during these tests, I was streaming alongside hosting these games; which may have been a factor as well.

Regardless, this is a major net positive for Steam and a huge advantage for indie developers. Time will tell what this will mean to the overall market, but more developers and consumers need to hear about this.

The Video Games That Really Propelled Poker into the Mainstream