Last week I’ve been playing both Dragon’s Crown and Payday 2. Now, normally those two games wouldn’t be considered similar, however they both featured the RPG mechanic of random loot acquirement.

Figuring out how the player acquires new look can be just as important as simply the design of the loot and where Dragon’s Crown messes up and Payday 2 largely succeeds.

With random loot placement in any video game, there are normally two conditions: Completely random, and set-random. Completely random is where there isn’t a set condition for acquiring rare loot. For example: In Diablo 2, I was running around killing random imps in Act One when a named unique item dropped.

Set-Random is where the game has specific conditions that loot is rewarded to the player. In Dragon’s Crown, that would be when you open a treasure chest, or in Diablo 3 for completely killing a unique group of monsters.

Completely random loot placement is more often seen in ARPGS and rogue-like games. But for the purpose of this post, we’re going to ignore them as we want to focus on making loot acquisition an event.

Set-Random placement is just about a direct analog to the psychological test of Pavlov’s bell: Where dogs were conditioned to drool when they heard a bell by conditioning them to associate bell ringing with food.

Chances are you’re not drooling when you’re playing a game of Diablo 3, but the same kind of conditioning is there: When enemy X is killed, the player will find a rare item. This creates the excitement and anticipation of getting loot before the actual appearance of it. In return, it feeds into that addictive nature of wanting to keep playing. 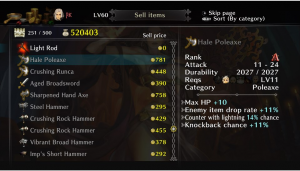 The rarity system of Dragon’s Crown varies too much: making lower ranked loot simply a waste of space past the early game.

While completely random loot is not a bad thing, because it is completely unpredictable, it can’t be used to motivate players as without an established time frame; the player will have nothing to go on.

Now, the concept of having a set drop or event for loot sounds simple but there are a few details that need to be understood for it to have the desired effect.

Set-Random loot like any well designed system needs to have some hard-coded design elements for it to work properly and it’s the difference between myself getting hooked on Diablo 3 and Payday 2, and not getting hooked on Dragon’s Crown.

First is that when using a set-random loot system, the player must always get something useful or not easily attainable out of it. With games built around gear of different rarities with common or trash rarity and super-awesome rare loot, you never want the player to see trash loot in a set-random system.

This incidentally goes against the title of this post as slot machines are designed to only pay out occasionally, with the person losing their money most of the time. Video games are different by the fact that the player is not just pressing a button or inserting money, but spending time fighting, shooting, grinding or whatever. To have all that time give the player nothing, is very disheartening.

In Dragon’s Crown, the player may not see what loot they have acquired, but they are given the rank with S being the best and E being the worse. Past the first five levels, E ranked treasure is simply not needed, due to not having modifiers and having the weakest damage range.

Now Diablo 3 as in Diablo 2 was built on the rush of getting new loot. And the designers knew that having unique monsters drop normal or trash loot would simply not do.

Payday 2 is a different case and is similar to the game Lost Planet 2 which Tom Chick  gushed about on the QT3 Payday 2 podcast. Both games reward a player for beating a mission with the chance to acquire loot. In Payday 2 the player picks from a pool of three cards to determine their reward: either a new weapon mod, mask component or a cash reward.

Kid Icarus’s difficulty slider allowed players to control not only how hard the level was, but the quality of the loot.

Technically, cash is considered the “trash” option as you’re not getting anything unique. But on the other hand it does tie into buying new items and skills so it does have a purpose compared to Dragon’s Crown’s lower ranked loot.

Another element is that the rarity or quality of the slot machine should be dependent on the challenge. In other words, the more difficult the challenge that the player is attempting then there should be a greater chance of being rewarded.

In Diablo 3 this was accomplished by simply making bosses drop more chances of rare loot compared to unique mobs. Kid Icarus Uprising had a great system that the quality of the loot you would find in chests and for beating the boss was proportional to the difficulty that you were playing at.

Meaning, playing the first stage on difficulty 7, would get you better loot compared to playing stage 3 on difficulty 3. This is a great way of not only engaging the player to make the game harder, but also reward them for doing it.

Currently, this is where Payday 2 falters with its random loot system and Dragon’s Crown succeeds. The draw of cards has no relation to the difficulty of the heist. In fact doing a multi-day heist is less rewarding for items than individual heists. As the time it takes you to do one multi-day heist and get an item, you could do several single day heists and get more item chances. And of course playing a heist on normal, hard or overkill difficulty has no relation to the system either.

In Dragon’s Crown, the game rewards players with more gold and better treasure, the longer the player goes without returning to town. Because you have to worry about item durability, you need to have several bags of items to use or you won’t get far. The only catch about raising the challenge level is that there is no penalty for returning to town at anytime, so the stakes aren’t being raised that much.

A well designed set-random system is a key component in any loot driven experience. As knowing the length of the stick, is just as important as the carrot on the end. Many games try to do this justice, but only some manage to get the combination of great loot design and the means to acquire them correctly. After all, there is a reason why people still play Diablo 2 after all this time.

The Problems with Padding out Game Design

The Oculus Rift Rush and a Warning.