The End of the Rock Band Era

This week marks the last DLC song for Rock Band 3 and the end of Harmonix’s amazing post release support. Since Harmonix has moved on to making Kinect games the chance of seeing a Rock Band 4 is low. But for a time the music peripheral genre was one of the fastest growing on the market, however several factors led to its eventual crash.

No one could have guessed in 2005 when Harmonix released Guitar Hero that they were creating the next big craze of the industry. The easy to learn controls combined with the impressive soundtrack of famous songs jumped Guitar Hero to the top.

After the release of Guitar Hero 2, Harmonix switched publishers and went with EA to work on expanding the design to feature multiple instruments and Rock Band was born.

Continuing the same pattern of easy to use peripherals with an even bigger soundtrack helped Rock Band become the hit party game of the time. Making things more impressive was Harmonix’s commitment to post release support in the form of additional song downloads.

Harmonix’s love of music and support of their series was easily seen, as more famous songs were added. They even managed to be the only developer to get a chance to put The Beatle’s songs onto Rock Band in the form of The Beatles: Rock Band.

“Rock Band 3 was still the king of the music genre hill but one game does not make an entire genre, no matter how popular it was.”

Rock Band 3 became the culmination of their goal of introducing both music and playing instruments to gamers with the development of “Pro Mode”. This feature allowed people to change the basic form of playing each instrument, to a more realistic version for people wanting to learn how to play.

Rock Band and Harmonix’s success with the music genre also led to other developers trying it for themselves with a variety of peripherals.

From DJ Hero, Just Dance, additional Guitar Hero titles and more came out to challenge Harmonix. The most interesting one would be RockSmith that was built primarily as a way to teach people how to play guitar instead of as a party game like Rock Band.

But as we have seen time and time again: with every great boom there is usually a bust. The decline of the music genre came from several areas, both from inside and out of Rock Band and Harmonix.

“My Only Friend the End”:

There are several issues that were at the heart of the decline of the genre. First being the price barrier. With each game you couldn’t just buy a copy of the game; you also had to buy the peripheral that was supported by it. This in turn raised the cost of buying each new game and gave consumers plenty of obsolete peripherals.

This also led to the problem of determining quality and support as many people liked the Guitar Hero peripherals over the Rock Band guitar. But unlike when buying a platform where once you bought it that was the only major purchase needed; with the music genre people were making big purchases every few months.

A fan of Rock Band who bought every version brand new with instruments would have run up a bill of over $600 when you apply the costs of the peripheral editions.

And that’s not counting the DLC available. If you throw in the cost of that plus every other music game’s equipment and DLC, it becomes easily the most expensive genre to play.

Not helping the cost was the number of lesser imitators that were out to compete against Rock Band. As we’ve seen in the social game market and the arcade industry, poor games can hurt the overall genre by killing consumer trust.

Each game that paled in comparison to Rock Band and cost just as much meant that another game was not going to get a sale. As with the social game market, the fans would only play one game and stay with it leaving everyone else out in the cold.

Another problem was that for fans of specific songs and genres they found themselves being pulled around by the various games. Leading to having to buy additional games or expansion discs to get the songs they wanted. But at this point Rock Band 3 is the most attractive option thanks to the plethora of DLC. 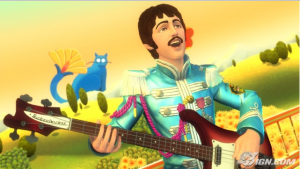 The Beatles: Rock Band was an amazing achievement for the music game genre, but high licensing costs and the close system hurt its appeal.

While Harmonix was still doing well with sales from Rock Band, they were not infallible.

The whole Guitar Hero/Rock Band series existed in a weird area of trying to appeal between casual and professional fans of music.

While having the licensed music was a good start, many professional musicians criticized the series for not accurately representing playing an instrument.

This criticism was one of the major reasons behind Harmonix spending a lot of time and money creating pro mode. As it turned out, the people who played Rock Band casually outnumbered the professionals and they were not as interested in the pro mode.Not helping matters was the further peripheral investment of buying the pro mode version of their guitar and drum controllers.

The biggest accomplishment of scoring The Beatles for their series, turned into one of the few failings of Harmonix. Even though The Beatles: Rock Band had the improvement of three part harmonies and the dreamscape sequences the songs remained exclusive to the game and not transferable to Rock Band.

While it was originally planned to have every Beatles album in the game, the lack of sales and development cost stopped that from happening after three albums. Personally, I think being able to have the songs available in Rock Band 3 would have been a great selling point, similar to the Rock Band: ACDC standalone release.

Rock Band 3 was still the king of the music genre hill but one game does not make an entire genre, no matter how popular it was. As AAA development costs continued to increase, publishers became increasingly more risk adverse.  No publisher wanted to spend the money on creating a new music game complete with developed peripherals and have the whole thing fail.

The jump to dance and exercise based games became the more attractive option as the hardware was already in place for PS3 and 360 owners with the Move and Kinect respectively. This became the cheaper alternative for casual fans who didn’t want to spend the money on additional peripherals that would eventually become clutter.

With Rock Band 3‘s DLC at an end, the future of the music game genre is up in the air. Harmonix is currently working on the Dance Central series and with the next generation coming soon, we likely won’t hear of any new games for a while.

I would like to see Harmonix to continue working in the genre that they helped get off the ground but if they were to create another Rock Band game, the big question would be: what happens to all the DLC?

The fans of Rock Band who have bought all that DLC, would not like it if Harmonix was unable to bring that over to a new game. But for now we can still look back on everything Harmonix did to foster the genre and made one of the best party series around.

A Serious Edition of the Perceptive Podcast