Recently on the Perceptive Podcast, we had an excellent discussion on the horror genre. When we got to the state of modern horror, the three of us each expressed our disdain for modern horror; specifically for jumpscare-focused horror. During the cast, we came to the realization of the problem with modern horror games: They’re not about the player, but the audience.

Smile for the Camera:

Over the last three-ish years, the rise of jumpscare horror has grown. Games like Slenderman, Five Nights at Freddy’s and a slew of indie titles have appeared. The rise of popularity can be attributed to the Youtuber crowd for making these games famous with reaction videos.

A lot of people have tuned in to the likes of Markipiler and PewDiePie jumping out of their respective seats and practically made Five Nights at Freddy’s famous overnight. When you combine jumpscares with over the top personalities, you get hilarious videos to watch and share with your friends.

On the cast, we talked about our problems with jumpscare-focused design, and to sum it up: The problem is that it’s not about generating horror or even a lasting design impression. Games like Five Nights feature simplistic design that can be broken by anyone who understands how the events work. 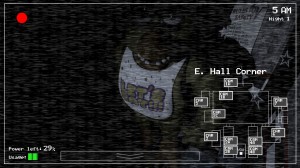 FNAF is a game designed more to be watched, then to engage the person playing it

Even watching Youtubers, you can see how their impression of the game changes after two or three videos, because the game can’t sustain terror for more than a few minutes.

However, there is a bigger problem with modern horror games and what they’ve done to the player and their role.

I’ve talked about important parts of horror design for multiple posts now. For today’s important point, it’s about immersion. Being able to pull the player into the experience and get them invested is one of the purest ways of generating horror. There are many different ways and tricks horror designers and directors have used in the past.

For the purpose of this post, we’re going to categorized them into several groups.

Effective sound and visual design have been helping to terrify people for decades. The top layer if you will for horror design. That sense of foreboding that comes from a great audio cue has done wonders for horror. Some key examples: The Jason noise, theme to The Thing and Jaw’s theme. 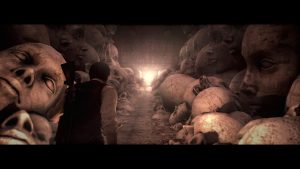 In the visual department, it’s about creating environments that are just perfect for horror: Barely lit rooms, destroyed surroundings, insane areas and so on.

We can also talk about cinematography here, but that’s too big for this post. If a horror situation can’t get this basic category right, then there’s no point in diving deeper into it.

The hero of the story or our POV is another important point of horror. Without an anchor to the story, we lose any interest in what’s going on. The popularity of regular people in horror is critical to talk about. Horror designers in any medium like regular characters, as they allow the audience to put themselves in the situation. As the audience, you start to imagine what would you do given the situation, and thinking about that raises the tension.

Another point is that regular people don’t have super powers or military training; making sure that they can’t fight these things in a normal situation. This allows the designer or writer to keep the audience/player constantly questioning fight or flight in these situations. 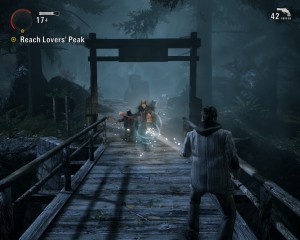 The regular person protagonist is an anchor for the audience

The protagonist also gives the situation weight. We need to know what’s at stake in order to get invested in the story. The main point of the horror genre is that we know that if these people fail, they’re going to die (or something far worse in some cases).

The last one is unique to video games, and it’s the player’s means of interacting with the game. The question is simple: What is the player going to be doing in the game? This encompasses everything from mechanics to controls and game systems.

This is where the discussion of fight vs. flight comes in, which I’ve talked about numerous times before, but it’s too big to go into detail about here. The important point for this category is that the player has to be immersed into the situation by the mechanics. They should have enough control that they feel (or are) influencing the outcome through their interaction. If the player has no means of controlling the situation, then they’re just watching a movie or cutscene.

With those three elements defined, we can talk about why modern horror is lacking.

Modern horror games are great when it comes to the visual/audio layer of the experience, but not much else. The protagonists are rarely defined and are most often supposed to be the player. The problem is that there is a difference between being the main character and projecting yourself onto a main character. There is very little weight to the situation when we’re supposed to be the protagonist of the story. 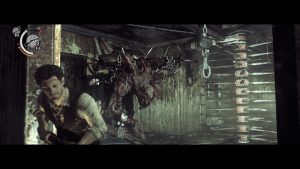 The reason why you need a main character is to frame the situation and give weight to it. Why is the person here? What are they doing? What happens to them if they fail?

These are all important questions that need to be answered by the game. The reason why Silent Hill 2 worked from a story perspective was because we could see the weight of the situation from James’s perspective. We knew what was at stake and what things meant to him.

Imagine if you played a Silent Hill game without having a main character, it would just be gory scenes without any context or framework. In fact, there was a Silent Hill game in that vein for the PSP, and it was critically panned.

From a narrative point of view, you also need someone to actually react to the situation. Without an anchor to the situation, it’s hard to feel scare when you’re just moving from scene to scene. This is why so many jump-scare focused games lose their tension after a few minutes of play. When all you have are the same scares over and over again, it’s hard to be scared by them.

Speaking of scene to scene, the player’s role is the other failing element of modern horror. Without an anchor to the story, the designers are relying on the player to motivate themselves to keep going. This is where the downplay of game elements really brings down modern horror for me.

Series like FNAF, Outlast, Amnesia and the countless other Indie-inspired titles are all built on one mechanic or interaction and nothing else. To be fair, we could say the same for any popular horror game of the last two decades, but there is a big difference: They have a story and anchor to the world to keep you invested.

The mechanics of survival horror lend themselves to different game mechanics: Combat, adventure and stealth; modern horror doesn’t have that. What you do in the first minutes of FNAF or Outlast is the same throughout the entire game. More elements or balls to juggle aren’t changing the basic interaction by the player. Great horror games are able to mix things up and keep the player guessing, as you never want horror to become repetitive. 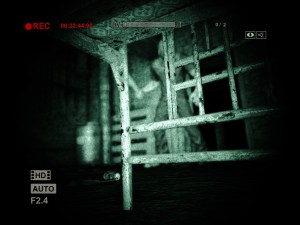 Games like Outlast don’t change their situation enough to keep the player guessing, but assault them continually

Playing through a game like The Evil Within, the developers switch up the player’s roles and situations to keep them guessing.

One scene will have you fighting for your life; another will have you sneaking around to avoid being seen. The point is that the player’s role keeps changing to prevent them from becoming complacent.

The state of modern horror games is not about providing an engaging experience to the player, but a highlight reel of reaction shots for the audience. There are a few exceptions such as Alien Isolation and The Evil Within, but more games are focusing on the FNAF model due to its popularity.

What’s interesting is that a lot of these setups and games could easily work for film (and we know FNAF is being turned into a movie), because they get the aesthetic layer so right, but they’re not engaging the player. That right there is the main issue: Modern horror games are about engaging the people watching, not the people playing. And when you only engage the audience, then you’re making a movie, not a video game.

I keep hearing that this is the best time for horror in the Game Industry, and I just don’t see that.  What we have today is not the same kind of horror that the likes of Silent Hill and Resident Evil helped inspired, but games built around limited experiences that are over before they can inspired terror. The game that I’m most excited to see would have to be Resident Evil 7, and I’m curious to see how Capcom is going to balance old and new horror design with it.

As we talked about on the cast, we’re all very interested to see where the horror genre will go next, but we all agree that a focus on the player is the most important part.