Tripwire Interactive has grown from a team of modders to a major company now working on the sequel to their longest running game Killing Floor. They’ve gone to early access this time and I felt this was the perfect opportunity to get in touch and ask them about their history and the change in development style.

The following interview was done with Alan Wilson, VP of Tripwire Interactive.

1. First off, for people who aren’t aware of or follow Tripwire, could you tell me a little bit about the history of the company?

The quick version: entered and won the Make Something Unreal contest 2003-4, with the Red Orchestra mod. Founded the company early 2005. One of the first non-Valve games on Steam in 2006, with Red Orchestra: Ostfront 41-45. Released Killing Floor in 2009, supported that with free content updates, plus special events and DLC, for 5 years. Published Zeno Clash, Dwarfs?! and The Ball along the way. Red Orchestra 2: Heroes of Stalingrad in 2011 (PC Gamer’s Multiplayer Game of the Year) and Rising Storm in 2013 (PC Gamer’s Multiplayer Game of the Year again). Released Killing Floor 2 into Early Access April 2015. Phew…

2. One of the interesting parts of Tripwire’s history is the fact that you guys are most known for games that started as mods that got turned into full titles. What led Tripwire to decide to release the original forms of Red Orchestra and Killing Floor as full titles, instead of mods to UT 2004?

Errr… to make money, so we could go on making games?

3. For people who aren’t familiar with working with the Unreal Engine, what are your thoughts on it and using it for first timers or other modders in the Game Industry?

That’s not a short-answer question! Well, it is free to download and use, which is a HUGE plus. Make money off a game built with it and you’ll have to share the dosh with Epic, which seems pretty fair to me. Probably considered the most comprehensive game engine out there now. There are probably others that are easier to get into, each has its own strong points. But one of the widest-used, best-supported there is. Great place to start 🙂

4. Obviously, Tripwire is a fan of FPS design and you guys have released two very different forms of it, between the arcade run and gun of Killing Floor and the slower paced Red Orchestra. Does your team have a general preference for one of the two forms of FPS design or do you like all FPS?

There are only 2 forms of FPS 🙂 ? Depends who you ask in the office. As artists, more of our people probably prefer working on KF, as it gives more “artistic freedom”. The RO franchise is realism-based, so the locations, weapons, everything needs to be based off something “real”. But one of the things that we find is that working on different styles o game gives people a break, a change of scenery (pun unintended) – and that can freshen up the creative juices. 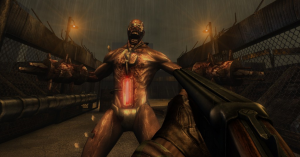 The original Killing Floor lasted a long time, thanks to continued support, modding and DLC packs

5. One element I want to touch on was the monetization model for Killing Floor. Originally the game had character model packs which then transitioned to weapons and those that were created by the community, could you talk a little about how you decided on this model for continuing support and funding for the game?

We just thought we’d try out a few ideas, to be quite honest. Being a relatively small, independent studio we aren’t beholden to anyone, and can take risks like that.

It worked, helped fund continued development of the game, the players had fun with the DLC and are always happy to get free extra content. We started doing community-made packs and sharing the revenue as a thank you to them and as a way to encourage more for the future. And we’ll keep experimenting in that space.

6. And continuing with that point, obviously as modders yourselves, you guys have supported the modding community with Killing Floor and had a similar deal that Valve did with TF 2 and having modders getting paid for their content. How important was it to you guys to have mod support for Killing Floor?

Mod support will always be important to us, for multiple reasons. First, we started as modders – so give back. Modding also adds potential extra content for our games, for little or no effort from us. Some of that (Mare Nostrum, Darkest Hour for Red Orchestra) being quite good enough to put out through Steam. Extends the life of the game, sells more copies – might even spawn the next RO or KF! Virtuous circle thing going there – why WOULDN’T we do it? I still shake my heads at companies that duck it, especially when they imply that their players are too stupid to do it. Way to go with your community, BEEEEEEEEEP [name removed to protect the corporate dolts]

7. Earlier this year, there was a big debate over the option to directly sell mods in games through the Steam Workshop. The service was taken down, but not before there were heated arguments on both sides. As game developers and professional modders, what did you think of this situation?

I think it was a bit mishandled. In general, I think Valve were absolutely right to explore finding ways for modders to start earning money from their work. Just not sure they picked the best place to start. If you think that people won’t like it, well, then they will vote with their cash. Your mod doesn’t interest me enough, so I won’t buy it. Survival of the fittest 🙂 ? 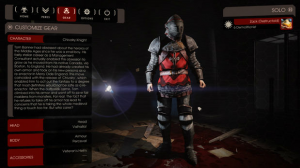 As before, expect to choose from a variety of characters along with new cosmetic options

8. With that said, let’s talk about Killing Floor 2. After all the work and support done on the first game, what made you guys decide to finally work on a full sequel?

The original game had a massive following – we were well over 3 million units sold of the game. Something like 70% of players having bought some DLC along the way. We’d had a ton of fun with it, but it was getting rather long in the tooth.

The code was old, the systems were old – to go much further with it would be a really big job. Just about as big as starting again, without the benefits. So, take everything we’d learned from 5+ years working with the KF community – and create KF2 for them.

9. What new elements or designs are you adding in Killing Floor 2, to give new and returning fans a run for their money?

It was driven by the desire to get the community input, while we still feel empowered to go back and change stuff. For instance, we basically took the Berserker perk apart and put it back together again, based on the community feedback. That would feel very odd for a game that had been declared as “released”. It is absolutely NOT about “help us find stupid bugs”. It is about “we think we’ve got the gameplay into a really good state – but we want your input as well, so we can make it REALLY good”.

11. And continuing from that point, considering the ups and downs of Early Access success, what lessons or trouble areas have you learned from watching other studios, are you making sure to pay attention to during Killing Floor 2’s development?

Don’t put out a broken, buggy piece of shit alpha/beta, call it “Early Access” and ask people to part with money for it. That annoys the living crap out of us, as players, so there was no way we were going to do that to people. So, everything had to work as intended from the start of Early Access. We wanted the feedback on gameplay/balance. And we got it – a LOT of it! So, our own learning lesson was about the sheer volume of feedback and figuring out how to cope with that, collate it, interpret it – and act on it.

12. And finally, do you have anything you would like to say to the fans reading this interview?

Its good fun now – with lots more content to come. So stop sitting on the fence – go buy it now 🙂

If you enjoyed the interview, please consider donating to Game-Wisdom, I need to hit the first goal soon and every dollar would be greatly appreciated.