When we look at how the game industry has grown over the years, very few game series have actually managed to persist over that time.  With the evolution of game design, many older series became antiquated and were resigned to only be remembered through playing them on complication discs or virtual stores.

But Castlevania managed to stick around by not just changing its design once, but twice.

The concept behind the Castlevania series was that a family of vampire hunters: the Belmont clan had to defend the Earth from Dracula who would resurrect ever so often. His home base was his ever changing castle which I believe was named after the title of the game.

The series was grounded in the 2d Platformer genre, as players made their way through each area fighting the various monsters. The main weapon: a whip gave them some distance when attacking, along with a variety of sub weapons.

Before the series made its first big change, the game featured committed jumping – where the player had no control over the character once they left the ground. This in turn made platforming segments very challenging. When an enemy connected with the player, it would knock them back and in a lot of cases, off of a platform to their death. This gave birth to one of the most annoying enemies in the history of video games: the flying medusa heads.

Even at such an early point in the industry, the Castlevania series featured impressive music and background art for the time. A tradition that would stay with the 2D Castlevania titles to this day.

During the NES era, Konami tried to change things with the second game and added in more adventure and exploration game elements to it. Ironically, while this would become big in the late 90s, the second Castlevania became the black sheep of the series.

The series went back to the more arcade gameplay as the industry moved to 16- bit. With several great games including the fan favorite: Rondo of Blood, which added multiple paths and endings.

Castlevania : Rondo of Blood‘s great graphics and multiple paths, is considered the top game in the series before the revision in 97.

When the Playstation debut, the big rush was for 3D games to showcase the system’s potential, Konami however went in a different direction and in 97, released one of the best games of all time.

Castlevania: Symphony of the Night is regarded as one of the best games of all time for a number of reasons.

While most series during the mid 90s made their transition from 2d to 3d, Castlevania SoTN was a complete change in the design of the series, while still keeping the impressive graphics and soundtrack.

SoTN combined the Castlevania setting, with a Metroid styled open world progression and threw in some RPG elements to create a new genre. From that point, the term “Metroidvania” was born and is still used to this day.

In SoTN, the entire castle was largely opened to the player from the start, with no stages to go through. Defeating bosses and general exploring would yield treasures that would give the player a major enhancement: like double jumping for instance. This in turn would allow you to progress through new areas, or find secrets in previous ones. The RPG elements came into play by the fact that the player could equip new gear and level up as the game went on.

Throw in a wide variety of enemies and bosses, including an entire second castle to explore and you can see why SoTN wowed gamers then and to this day.

After the success of SoTN, funny enough, Konami then tried to take the series to 3D on the Nintendo 64. However poor gameplay and graphics turned away gamers. This wouldn’t be the first time Konami tried to take Castlevania to 3D, but they learned that the 2D games were a hit.

From that point on, the Metroidvania styled games were moved to the Game Boy platform, with Castlevania games on every one from the Advance all the way to the DS (with a 3DS one coming soon.)

While on the consoles, Konami experimented with several 3D Castlevania games, which were aimed more towards action gamers in the vein of God of War. Each 2D game has been a major success for Konami, but the 3D ones have had some trouble catching on. According to reviews the last 3D game: Lords of Shadow seemed to have struck gold and Konami is going to continue the series. 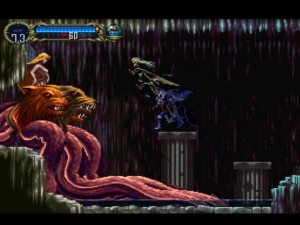 Castlevania has been one of the most successful series from Konami and proved that you could alter established formulas and find success.

Not only that, but that 2D titles can still be engrossing even with 3D being the standard of game design today. The design was so well thought out, that the metroidvania titles still hold up today, making them a must play for anyone interested in game design.

Up Next: The Letter D