Wrapping up this series, I want to take a look at crowdfunding and early access. While sites like kickstarter and Indiegogo have been around for a few years, crowdfunding really took off in 2012 thanks to Doublefine. Since then, the Indie market and the game industry have certainty been affected by giving developers a new source of income and fan base.

The video game profit structure for titles has remained the same since the early days of the industry. A developer worked on a project either on their own time and money or with the assistance of a publisher providing financial support until the game was released. After which, the developer and publisher would hopefully receive money from the consumers to cover the cost of development and provide some revenue on the project.

This meant two important factors, first was that money needed to be available for the game to even get off the ground. This in turn limited what games could be made as without the investment or having money saved up from other sources, you couldn’t make a game.

And second, this gave publishers control over what games would go to market and if they didn’t like the idea, it wasn’t going to get funded.  And even after approval they still had control over the content and could alter a game to maximize profits over quality. We talked about how the Spec Ops the Line developer was forced to include multiplayer despite the game being focused on the story. 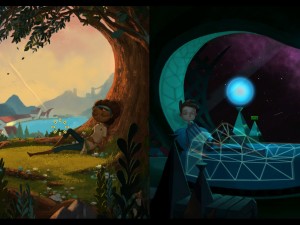 A game like Broken Age wouldn’t have been made in the AAA market, which helped Doublefine’s kickstarter become a success.

To be fair, publishers had as much at stake as the developers when it came to the AAA industry. With game development costs rising into the millions, a dud could easily spell the end of a game studio and severely hurt the publisher and their other studios.

As we’ve talked about previously, crowdfunding has been around for several years for smaller projects. It wasn’t until 2012 when Doublefine went to kickstarter to help fund Broken Age that crowdfunding entered the spotlight. This was the first time for the model that a major name in the game industry was using it to hopefully fund a game.

And news certainly spread, with Doublefine hitting their original goal within 24 hours. As we now know the floodgates effectively opened after that with game projects popping up all throughout 2012 and continuing to this day. The allure of crowdfunding is an important part of its success and needs to be mentioned.

First is that it allows developers to finally break free from publisher control. They no longer are forced to have someone over their shoulder telling them to make changes to affect the game’s profitability. Now they can make the game they want to make and one that their fans are hopefully going to love.

Secondly we have the fans themselves and why they flocked to kickstarter. Many people bemoan how formulaic the AAA market has gotten which has caused a lot of classic genres to fall by the wayside and deemed “not marketable.” With crowdfunding, it gives these fans a chance to play a game that they would not see otherwise and at the same time receive some special rewards from it.

Two examples would be the games that Ken and I backed and wanted to see. Ken’s example would be the next game in The Longest Journey series and mine would be The Darkest Dungeon. Both games would not have been made in the AAA market and we are excited for our respective pledges.

With a successful kickstarter and any press mentions, a developer can have their fan base established before the game is even done along with the free publicity that goes with it. A far cry from AAA games that have multi-million dollar marketing campaigns to get their name out.

The success of crowdfunding also gave birth to a new form of preordering with early access. Instead of donating money to a project that may have not been started yet, this allows people to pay for a game and play it right away and up to and beyond its release.

Unfortunately for the good that crowdfunding brings, there are several issues that bring into question whether or not the model will remain sustainable. First has to do with consumer confidence. Over the last year, we’ve had cases where kickstarters failed to produce a game and recently the Oculus Rift buyout has many concerned about the direction the Rift is going.

Godus’ development has been met with complaints due to constant changes and 22 Cans going dark for so many months.

The point is that in order for crowdfunding to work, consumers need to be willing to trust people with their money.

There is also the growing argument over entitlement when it comes to crowd-funding. Many people feel that projects that do go on to be big successes, should give back to the people who made them work in the first place.

While we have discussed at length why Kickstarter is still a donation site, major projects like the Oculus Rift do blur the line as a project that people invested in, was sold to Facebook.

Early access also raises similar issues as there is no standard of quality when it comes to it. Some people put up games in beta; others alpha and even some start their game from square one with early access. And the same issues arise: What happens when early access games fail to deliver?

With many games being funded or put on early access at the start of their development cycle, these games can take a few years before they are done. Not many people are privy to how game development works and may not understand that developing a game takes time. No matter how you slice it, if the consumer confidence falls out, crowdfunding is done.

This decade is almost half way done and we have seen some tremendous movement in the last four years. Who’s to say what’s next for the Game Industry as Indies continue to grow. And it remains to be seen if AAA development will remain as it is.