On yesterday’s post I talked about Hulk: Ultimate Destruction as one of the first superhero games to do the open world genre justice. Well, today’s game and the final post for this series is the other one that not only came first but was one of my fondest experiences of the last console generation.

Spiderman as a game property was unusual by the fact that it had games both based on movies and regular stand alone titles which is just like what has happened with Batman. When the Sam Raimi directed Spiderman movies became a hit we of course got the licensed games based on the movie. The first Spiderman game was your usual licensed IP affair: following in step with the movie with a few twists here and there.

But for # 2, Treyarch who were at the time known for the Tony Hawk Pro Skater series and previous Spiderman games (both movie and original property), decided to go in a different direction.

While Spiderman 2 took place during the same time as the movie of the same name, the developers decided to not completely focus on the movie plot and instead went with a “day in the life” type situation. There was no mention of Peter being depressed, or levels where you lost your spider powers. Instead the game took the form of loosely having the events of the movie play out over the course of being Spiderman.

And surprisingly for the time, it worked. The plot of the movie was interspersed with other Spiderman villains showing up as missions for the player. This did a good job of expanding on the Spiderman mythos and introducing people new to Spiderman, to some of his other villains.

In between missions you had the open world exploring and this is the big point about what made Spiderman 2 great. Treyarch adopted a physics based system for web slinging where the player could not just swing on webs attached to nothing. Instead, webs would stick to the buildings and in return, affect the player’s trajectory and movement around the city.

Simply put, it made Spiderman behaved how he would in a real world environment. This is still one of my favorite modes of transportation in any open world game. As the player went on they would unlock new web related moves that would give them more options. 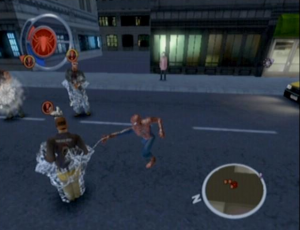 The best part was that nothing ever became invalidated like we see in other open world titles. Such as in Saint’s Row 3 and 4, where once you unlock air vehicles, it rendered the cars meaningless.

Or once you unlock enough gliding and jumping ability in Prototype, you could just hold in one direction and go on auto pilot.

In Spiderman 2, you were always engaged while you were moving around the city. Spiderman 2 also had some decent collectibles in the form of monument tokens, Spidey facts narrated by Bruce Campbell and side quests.

Many upgrades could not be purchased without completing enough side quests and the game really made you feel like you were Spiderman out and about in New York City. A feeling that I haven’t felt from any other super hero based open world games since.

Spiderman 2 also had a decent combat system of Spiderman jumping around, hitting enemies with webbing and so on. Once again playing into the fact that you were this very agile character, you could swing in; take out a group of guys and swing out within a thirty second period.

For the first time, this was an open world game that I wanted to go around and find all the collectibles as the movement system was just so engaging. Sadly as it turns out, I and people like me were not in the popular majority and when the sequel: Ultimate Spiderman was released, the physics based web slinging was removed.

Easily one of the most disappointing video game moments I’ve had. In a strange twist of fate, the creator behind the Spiderman 2 game and physics system: Jamie Fristrom took what he learned from Spiderman 2 and created a successful kickstarter for Energy Hook — a game looking to be a spiritual successor in design, but with more involved gameplay. You can still get into the alpha from the Energy Hook main site.

With the success of Saint’s Row 4 carrying the tradition of open world games with super powers, I would really love for someone to create a super hero game in the same vein as Spider Man 2 — A less narrative or mission based focus and more of a day in the life simulator.

As I’ve been harping on for this series, for an open world game to work for me, it must have engaging moment to moment gameplay and not just excitement for when it’s mission time. I don’t want to spend 15 minutes running or driving around to then spend 5 exciting minutes and then repeating the pattern.

With GTA 5 coming out soon, it will be interesting to see how the next generation of open world titles will respond.