When it comes to RPGs, some of my favorite ones are those that strayed from the norm: Xenoblade Chronicles, Shin Megami Tensei and an upcoming one hit wonder post. With Sigma Star Saga, it is truly a shame that it didn’t do better due to how far out the designers went. The problem in a nut shell is that we have a game that was almost awesome on every level, except for one adherence to old school design that sunk it.

Sigma Star Saga was a jrpg mixed with a 2d shoot-em-up. The story is that the Earth has been at war with an alien species called the Krill. The player controls Ian Recker: expert fighter pilot who is asked to perform an undercover mission.

He had to join the alien side as a grunt soldier and fugitive from Earth and find out what the aliens were up to. From there the story does a good job on the topic of viewing a conflict from different sides as Ian’s loyalty to Earth was tested as he found out what was happening in the war.

The gameplay was split between on foot sections and ship battles. The foot sections played out like the 2d Zelda games, as the player explored planets for items and clues to progress through the story. While wandering around, the player may be beamed onto a ship for a shooting section.

The ship sections play out like a scaled down version of R-Type. The player had to destroy certain # of enemy ships to win the battle and return back to the surface. Defeated enemies drop blue orbs that act as experience when picked up. Leveling up increased the player’s stats. There isn’t much equipment in the game outside of quest related upgrades, but the ship sections offer the player some customization.

While the ship itself changes for each battle, the player is able to customize how the ship fires using GUN data. GUN data is split into three sections: how the bullet is fired, what type of bullet, and what happens when it hits something. Whatever the player picked for each section became their attack during the ship sections. GUN data could be found while exploring during the foot sections and rewards for certain fights.

Boss battles took place both during foot sections and ship sections, with the foot ones playing out like a Zelda fight, and the ship ones like a stage from a 2d ship shooter. Many times the player could return to previous areas to use new equipment to find better GUN data. Overall between the unique gameplay and story, SSS had a lot going for it, but there was one major problem that killed it.

SSS adhered to one major element of JRPG design: random encounters. The ship battles could occur at anytime while the player was exploring on foot. The problem is that at the rate that these battles occur, it turned the pacing of the game into one huge slog.

Since each battle is about defeating X # of enemies, you had to fly through the section until enough enemies appear. Even if you are one hit killing every enemy and way over leveled, you still have to fly through the same sections. When you’re trying to explore for hidden items, and having to stop for several minutes every few feet, just killed the desire to explore. 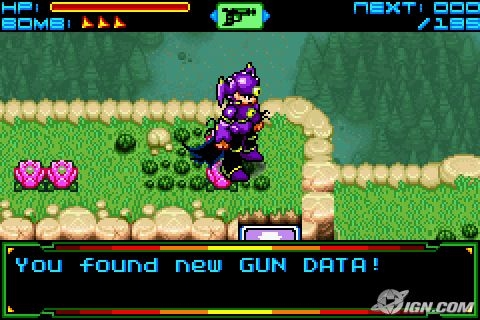 The tedium of exploring on foot was for new gun data

The other problem is that unlike other RPGs, there is no loot rewarded for battling, only experience. As the player leveled up, the amount of experience from weaker enemies dropped to compensate. This further slowed down the game as the player got nothing from having to stop and fight weaker enemies except wasting time.

The developers went through so much work to develop a unique weapon system, to attach a cumbersome system from older JRPG design was a mistake. One solution would have been to let the player control when and how difficult the battles were. Similar to The World Ends With You, where the player was able to dictate when they would fight random enemies, and how hard the battle was. The harder they made it, the more they would be rewarded.

It’s a shame about SSS, as it was one of the first unique RPGs both on the handhelds and from the genre in general. Combining a shoot-em-up with RPG conventions was an easier sell compared to the craziness of The World Ends With You, but that one mistake cost them. In the end, it just goes to show you how just one element out of pace with your design can bring the whole thing down.