In the past I’ve talked about how much I love rogue-like elements and how they can spice up existing genres: From games like The Binding of Isaac, FTL and of course Dungeons of Dredmor. But while these games are relatively new, today’s kickstarter is for a series that predates them all and one that holds significance to me.

Infinite Space 3 is the third game of the series that started in 2002 with Strange Adventures in Infinite Space. The basic design of the series is a spaceship rogue-like game. At the start you choose your ship and starting conditions and the galaxy is randomized.

The concept is that you are going on an epic space adventure for X number of days. Every time you travel to a new planet that takes away time from your trip and when time is up the game is over. Visiting planets will award you with new items for your ship, events to deal with or both.

The combat system that I saw in Weird Worlds (the second game) was real time. You move your ship around from a top down view and try to get your weapons within range of the enemy while staying out of their attack radius. Get destroyed in combat and of course the game ends.

What makes the Infinite Space series so endearing is how the rogue-like elements are fully integrated. With the entire galaxy randomized at the start, prevents any two plays of the game from playing out the same way. One game you may get lucky and acquire the best weapon from your first event, while another game you may never see it.

The Infinite Space series is also designed for quick plays, with a single game taking anywhere from ten to thirty minutes.  The series featured a high score table so that you can keep track of your best adventures and try to shoot for something better in your next game.

One aspect that I enjoyed about the series is that Digital Eel managed to avoid the problem that FTL had in regards to an end. While both games feature a randomly generated game-space, FTL had a set final boss. This meant that no matter how you played the game, the final boss was always the same both in tactics and design. 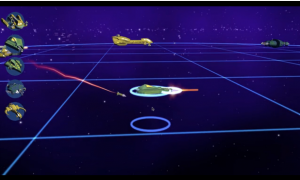 With Weird Worlds there were no set final events. Instead, keeping with the randomized nature of the game, a grand finale may or may not happen near the end of your session.

Making things more interesting you could choose to not fight the final ship as losing would award you less points than just running away, further giving the game a risk vs. reward feel.

The randomized nature of the game combined with the quick game sessions made the series a great introduction to Rogue-Like elements without requiring someone to play a complicated Rogue-Like like Net-Hack.

With Infinite Space 3, Digital Eel looks to expand on the design with a 3D engine used for both exploration and ship combat. The concept of creating a more fleshed out galaxy that changes based on time and your interactions sounds very intriguing. When combined with the Rogue-Like elements of the series should give Infinite Space 3 more replayability than previous games.

Lastly there is one other reason why I’m excited about Infinite Space 3. Weird Worlds: Return to Infinite Space was one of the first games I beta tested when I did testing for Shrapnel Games. And for anyone who still has a copy of the manual, you can find my name in the credits. This was way before I even thought about blogging, much less running a site like Game-Wisdom and it feels weird to look back on that time in my life.

The success of the games mentioned at the start of this post has helped turned a lot of gamers onto Rogue-Like design. While the Infinite Space series predates them, the last game came out before the move to digital distribution and is probably the least familiar to the mainstream market of the games mentioned here.

Hopefully with the kickstarter and the release of Weird Worlds on Steam, we can see how Digital Eel will improve their series for a new generation of gamers.

A Serious Edition of the Perceptive Podcast