As we’ve seen time and time again, being the bad guy can be a fun experience. And one of the ultimate bad guys around would be a deadly disease which the developers of Plague Inc Evolved are counting on. Inspired by the hit flash game Pandemic, Plague Inc Evolved has mutated into a deadlier strain and has a lot to show while still being on Early Access.

The following spotlight is based on what’s considered evolution 8 or patch 8 for Plague Inc Evolved. Screenshots and comments here may not match the release version or subsequent beta versions. Looking at the Steam forums, there is no mention of when the game is scheduled to be finished.

This is the End:

There is currently a free version of Plague Inc available on mobile devices, while PC gamers can play Plague Inc Evolved on steam. The main difference is that the free mobile version will charge you for buying additional content while the PC comes with everything bundled together.

Plague Inc Evolved is all about one simple goal: Wiping out the human race. You’ll start by choosing the type of plague you want such as virus, bacteria and others, then starting perks and finally your starting country and then it’s time to begin.

The majority of your time is going to be waiting for evolution points to build up which are earned based on the number of people and countries infected. You can also gain some by clicking on little bubbles that pop up during play. Once you have enough, you can go to the evolution screen and enhance your disease.

There are three categories of improvements: Transmission, Symptoms and Abilities. These in turn will affect how your virus behaves and alters the three ratings of lethality, infectivity and severity. The game runs a complex simulation of how your disease will move around and infect people and it’s quite interesting to watch how things go. 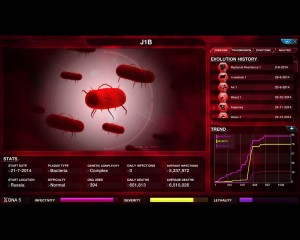 The game gives you loads of information about your custom made plague.

The challenge of the game is that you have to pick the right times to enhance certain aspects of your virus. Early on, you want to go for max infectivity to make sure that it spreads all over.

The more people who are infected and the greater severity will determine how alerted the governments of the world are to you. Once they are aware that your disease exists, research will begin to figure out a cure.

You lose if there are still humans uninfected by your disease or if the cure is discovered before everyone is dead. To add replayability to the game, each type of virus has unique abilities and characteristics to make use of. The necroa virus, AKA zombie virus turns the later half of your game into a pseudo strategy game as you try to lead your zombies to world conquest.

The game is all about waiting for the right time to escalate matters. Go too heavy on infectiveness and you’ll get everyone infected, but may not kill them before a cure is discovered. On the other hand, go full on Black Death and all the infected may die before the world is infected.

While the developers have certainty taken Pandemic’s concept and ran with it, they haven’t managed to avoid the problems with it.

The big issue with Plague Inc is that a lot of the game is the player waiting: Waiting for disease points, waiting for countries to be infected and waiting for the population to run out. There isn’t a lot of game mechanics here, other than popping the bubbles that appear on the map.

Evolving your disease is the most gameplay in the title but could use some greater explanations. It’s hard to tell what information is flavor text and which ones lead into a greater strategy. For instance, does having birds carry your disease really do better than rats? Your only real update on your choices are the plague stats at the bottom of the screen. 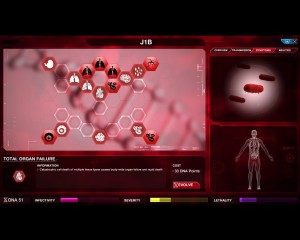 Upgrades are important, but it’s hard to tell exactly their impact on the spread of your disease.

This reminds me of another Indie game: Fate of the World that also gave the player a lot of choices but not a lot of explanations as to what does what.

Another problem is that the game could use either more random events or greater strategies as despite the plague variety, the game does become routine quickly.

Areas that only can be access via ports are the hardest to infect and if they close the country down before you get someone there, in most cases you would have lost the game even though the game could run for several more minutes. Obviously because the world map is the same every time, people have already figured out the best starting locations to compensate.

Gods Will Be Watching: Existential Crisis