During the late 80s/mid 90s Disney licensed games were some of the premier titles around thanks to Disney going after the best developers like Capcom to create their titles. And Mickey starred in a number of classic games for both Nintendo and Sega systems with Castle of Illusion one of them.

Flash forward today and Castle of Illusion joins Ducktales as another game receiving the update treatment. But instead of a remake we got a modern retelling and I’m not quite sure if this is a better homage than a remake.

Castle of Illusion has the same exact story as the original Sega Genesis title: Minnie gets kidnapped by an evil witch and Mickey must enter the Castle of Illusion to save her. And while the themes of each world remain the same, the level designs are quite different. Every level has been completely redone for this edition along with new graphics, challenges and even an overworld.

Finding diamonds in the worlds will unlock levels in the castle but the main form of progression is finding the rainbow gems. The basic gameplay remains the same as Mickey runs, jumps and can throw objects to knock enemies away. Bouncing off of enemies is still the main way of defeating them and getting up to hidden areas.

While the original game was entirely 2D, Castle of Illusion features new 3D areas along with new puzzles and sections. Hidden areas act as advanced challenges where the player can be rewarded with new items to fill the hub area and costumes to dress Mickey up in. The idea of making the hub area the “rewards area” was a great touch.

Overall the game’s difficulty seems to swing between easy and moderately challenging based on the platforming areas. There are several parts near the end of the game that required some quick precision jumping but all in all the game is on the easy side. 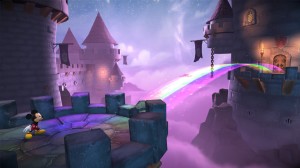 The art design is not bad in Castle of Illusion and Mickey was well animated.

Speaking of the end of the game, Castle of Illusion is very short and I clocked in around 2 hours to beat the entire game.

My memory is failing me, but I thought that each world had its own rainbow gem in the original. With Castle of Illusion, the final two worlds have two gems a piece, meaning you’ll only explore four unique environments.

I would have also liked more expanded challenges and rewards for playing through the game. While the ones in there were decent, there really wasn’t anything for expert players to shoot for 100%.

For those that missed Ducktales, it was a shot for shot remake of the original with enhanced graphics, voice acting and redesigned boss fights. The only truly new thing the developers made for Ducktales was the opening level/tutorial. Everything else from the lives system to the enemy spawn locations were the same.

And my problem with that was the design really doesn’t hold up in today’s world much less be the worth the price of an Indie title. Castle of Illusion took the original and used that as a framework to build an entirely new game out of it. 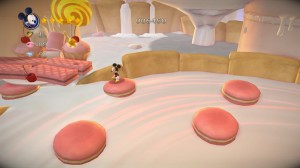 The moves to 3D also impacts the camera and can be sometimes hard to gauge the jumping.

Capcom’s original lineup of classic Disney titles are ripe for bringing back today and I would love to see Mickey’s Magical Quest again.

But in today’s world of virtual consoles and the ease of playing these older games, developers need to take the extra mile when bringing these classic titles back.

Steam Sales and the Summertime