If there’s one thing I truly love, is when a developer seems to read my mind and create a game from one of my crazy dreams. Whether that is a game about catching ghosts or today’s game about managing a Sentai inspired team. Chroma Squad is the very definition of a passion project and one I’m glad that Behold Studios was able to make.

Chroma Squad as the title screen implies, is inspired by Saban’s incredibly popular Power Rangers or the genre known as Sentai. Just like the show and its various incarnations, your mission is to lead a multicolored squad of teenage heroes to fight monsters, poorly dressed minions and of course get into giant kaiju fights.

That by itself would be an awesome premise for a game but Behold Studios went further and it’s not about being a team of Sentai heroes, but creating a Sentai show. The story is that a team of stuntmen and women became fed up with the crappy show they were on and decided to start their own studio and create the Sentai show of their dreams.

The game is framed around seasons of the show as you shoot episodes in order to win fans and make enough money to keep going. At the start of the game, you’ll form your team from a series of preset characters; with some created via kickstarter backers. Each person has a weekly cost and different stats to keep in mind about. You can also decide who will fill which role on your Sentai team and change their colors. The roles affect the character’s stats, options, equipment in combat and unlocking role specific skills overtime. 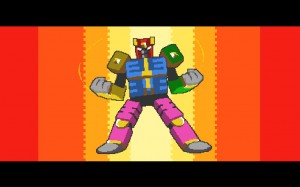 Before shooting, you can buy and craft new gear with everything being models obviously and more options become available as you play.

You can also upgrade your studio in various ways which will increase the weekly cost but provide unique benefits.

After equipping everyone and choosing an episode to shoot, you’ll head out to the stage and begin putting on your show or when the tactical combat starts.

Each episode plays out as a series of scenes where your team of Sentai heroes must defeat the bad guys and save the day. When you start a new episode, your heroes will be in their regular form and won’t have access to their skills or weapons. Your audience meter shows how well you’re doing and increases based on your actions. Once it’s high enough, you can transform and after a flashy cut-scene can use your abilities.

Your combat options are limited to a regular attack, teamwork (more on that in a second) and any special role specific skills. Similar to XCOM Enemy Unknown, you can perform two actions with a character per turn.

Teamwork is a special option and keeping with the Sentai theme, characters can set themselves up to help out their teammates. When a character uses teamwork, they will pose and can be used with the other characters. While posing, another teammate can do a flip off of them to move farther in a single turn and posing teammates can assist in combat.

The rule is that if the posing character is within attack range either with their basic attack or matching weapon skill, they can assist in the attack. The combined attack does more damage and as with a Sentai show, all five members can team up for one special “With our powers combined” attack which you can even give it a different name. 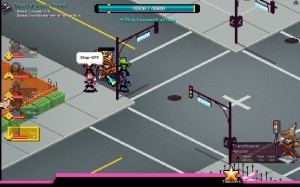 While the combat is pretty basic, trying to complete the director’s commands during a scene is where the challenge comes in

What’s interesting is how the show aspect of the game comes into combat and it really does help to elevate things. Your audience represented by the bar at the top will grow and shrink based on your actions.

The more people watching when the episode is over will translate into fans and more money. The number of fans essentially is your failure state; if it gets too low you’ll lose the game.

Each scene comes with director guidance that tasks you to complete side objectives in order to make the episode more interesting to the audience. These tasks are set to each episode and vary from not attacking the boss until the minions are killed, end a fight with a finishing move and so on. The reward is a massive audience boost that becomes more important as the game goes on.

This was a very smart addition by the developers as it gets around the limited AI of the enemies and makes the player be proactive in how they approach each scene. Straight up combat is on the basic side, but having these additional constraints forces you out of your comfort zone.

All in all Chroma Squad is an amazing game, but the lofty goals set by the developer were unfortunately not all met.

There isn’t one big problem that I can find in Chroma Squad’s design which is a good thing; just small details here and there. As mentioned, the actual tactical side of the game is a bit on the simple side. There are no advanced maneuvers or other team up options available which makes combat sometimes devolves into just beating up on an enemy with team attacks. It would have been great to have some advanced options like overwatch, coming in to protect allies and so on to make things more interesting.

On the studio management side, the UI and general gameplay are a bit clunky. Information like what do fans do, how to earn money, crafting and more aren’t really explained. The game asks the player to make some big decisions without giving them the necessary information on what their choice will impact. For instance, you have to set a team and their roles without knowing how combat works or what the stats do. 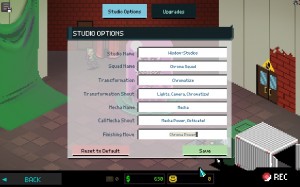 There are a lot of options to customize your studio but some of the deeper mechanics aren’t explained that well.

The money making mechanic as a whole could do with more explanation and options available. Since you can only record an episode to its completion once, if you don’t know what you’re doing you could end up with fewer fans and less money.

I reached a point where I was strongly considering restarting just to correct some of my earlier decisions and choices.

Despite the multi season format and multiple endings, there isn’t any real evolution or growth of the mechanics and situations. What you do during the first season is pretty much going to be the same until the end.

Chroma Squad is a great example of what I love from the Indie space and being able to create a project that everyone at your studio is on board with. Similar to my review of Ghost Control Inc, I would love for the developers to take this concept now that they have Saban’s blessing and expand it either with new content or a sequel.

While it’s not the most complicated tactical game on the market, Chroma Squad has a lot of heart and should win over fans that grew up watching shows like the Power Rangers.