After the complete miss that Dear Esther was to me, I was a bit apprehensive to try Gone Home despite the reviews it received. Having played it, Gone Home did manage to keep me invested a little bit longer and delivers an interesting, but short experience.

The story of Gone Home involves Kate returning home from her visit to Europe. Arriving late at night, she finds the house abandoned and a mysterious note from her sister: Sam. From there, it’s up to you to explore the house to find out what’s happening.

Gone Home is a narrative focused game, meaning that there are no puzzles, monsters, combat, etc to deal with. The game is focused on telling the story of Kate’s family, with the major plot being that of Sam’s story. Your only means of interaction are moving around, picking up objects, opening doors and turning on lights.

Finding important objects or personal notes will unlock brief audio clips of Sam talking about what’s going on with that item. The environment was detailed incredibly well with tons of cabinets, closets and items to pick up. The game takes place in the 90s with tons of items, magazines and more from the era. 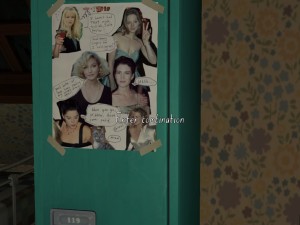 Gone Home makes full use of its time setting, with magazines, easter eggs and more related to the 90s

The story of Gone Home is quite interesting, as it is both non linear and linear. There are several plots going on throughout the game based on the items you find that help tell the story.

You are free to explore the house and it is set up in such a way that as you find yourself moving further and further in, the various plots move forward.

And that’s really all I can tell you about the gameplay and plot, as going further into detail about it will ruin the game’s about two hours of content.

Narrative wise, Gone Home falls into the same trap of other open narrative type games — That if you’re not careful, you can miss entire plots. Playing through, I was able to put together the main plot and one of the other family members, but spoiling myself afterwards I found that I missed other ones.

Because the audio clips are only from Sam, you are going to understand her story the most. I would have liked to have other forms of exposition, not just for Sam but for the other storylines as well.

The price of Gone Home also has to be factored in the equation. At $20 normally, this is one of those cases where I find the price doesn’t match the content that is there. I was able to pick it up through the Steam Autumn sale and unless you are absolutely dying to play it, I would buy it on sale as well.

And this is where I am of two minds about Gone Home. From a game design perspective, Gone Home completely and utterly fails in the same way that other narrative games do with having very little gameplay. But from a storytelling point of view, Gone Home is an impressive game, managing to tell a mature story in a way that is completely unique to the video game medium.

Despite its low playtime, you can tell that this was a very passionate project from the designers with the work that went into creating this house and the various storylines that it holds within. While it is definitely not for everyone, Gone Home is a must play for anyone interested in exploring a different form of video game storytelling.