Metroidvania is one of those strange terms that has found itself to now describe the action adventure genre. There have been many great examples but not too many found their way to the PC. So when Guacamelee! was ported it was time for celebration and this incredibly stylish game dresses to impress.

The story of Guacamelee follows Juan, a man wanting to become a luchador but failing and resign to be a farmer. When on the Day of the Dead an army of skeletons arrives and their leader kills Juan. Sent to the land of the dead, he finds a magic mask that transforms him into a super powered luchador to save the world and his girl friend.

The first thing you’ll notice is the amazing art style which takes inspiration from Mexican artwork along with a great soundtrack. Not many games these days take their style from Day of the Dead and the last one that comes to mind would be Grim Fandango.

Guacamelee’s takes heavy inspiration from both metroidvania design and 2D games with homage’s to classic characters and games along with a variety of moves. As you play through the game, you’ll unlock special moves and abilities that allow you to progress and of course find power ups in earlier areas.

Since you’re a luchador, combat is a bit more developed compared to other metroidvania games and it also plays a role in puzzle solving. You’ll eventually earn special attacks that are used in combat and for breaking through specific colored blocks while exploring.

Combat is based around four buttons: a basic attack, special moves, grappling and dodging. Hit an enemy enough times to stun them allowing you to pick them up and throw them. Combos can be stringed together as you can juggle an enemy in the air and keep them off balanced via your special attacks. Special attacks drain stamina which recharges over time and you can only use a specific special attack once while you’re in mid air.

As you beat enemies, you’ll collect money which can be used to unlock new moves, upgrade health and stamina (for special attacks) and buy new outfits that can affect your play style. 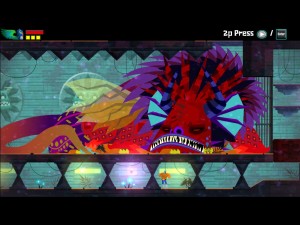 The game’s art is impressive with bright colors and a strong Day of the Dead theme.

And as a metroidvania game, expect to find numerous items off the beaten track and side quests from the villagers in town.

One area that is surprising is how much of a challenge the platforming side of Guacamelee becomes, requiring the player to make use of their special attacks to maneuver around. Fortunately there are no lives or penalties for falling into pits and you can keep trying until you succeed.

The game does offer replayability in the form of additional difficulty levels, local co-op and going for 100% completion. But it may be surprising to hear that my main criticism with Guacamelee is right in the title.

Guacamelee’s design falls between a beat-em-up and the exploration of a metroidvania game and while the developers did a great job growing the latter, the combat seems to peter out early on despite the special attacks.

One twist that gets introduced is the ability to switch between the real world and the realm of the dead. For exploration purposes, certain platforms and walls only exist in one dimension and you’ll have to figure out the best way to move around. As for combat, if an enemy is in the other dimension, they will appear as a white or black specter, where you can’t hit them but they can hit you.

Because enemies have a tendency to get bunched up, there were plenty of times where I was trying to hit one enemy, while the enemy in the other dimension was free to attack. Eventually you’ll start fighting enemies who you can’t dodge their attacks making it very easy to get hit.

There is a lot of humor in the game, from parodies of classic game characters to the fight announcements before special battles.

Another annoying mechanic is the introduction of special shields that can only be taken down by hitting the enemy with a specific attack.

The shield doesn’t stay down for long and when you’re fighting multiple enemies with different shields, the combat can be drawn out at times.

Speaking of combat, the developers have thrown in numerous arena battles where the player is locked in an area and required to defeat every enemy to move on. The problem is that the majority of these fights take place in an empty square room with the only change being the number and types of enemies.

These battles are so frequent that it began to upset the flow of exploring the later dungeons as you’ll be constantly side-tracked with these fights. If the rooms were differentiated or combat more refined, it wouldn’t be so bad.

The developers have a basic combo system where you can knock enemies in the air and chain attacks to keep them there using your special moves. While it is pretty cool at first, the combo system lacks the refinement of games with a stronger emphasis on combat and working towards learning the combo trees isn’t necessary as there is no greater reward for using them outside of the cool factor for pulling them off.

Guacamelee is a well designed game and is one that I wouldn’t mind seeing the developers continuing as a series.  Well designed, stylized and sure to be a blast if you can find someone locally to play with.

A State of the Game Industry Cast

Sequels: the Good, the Bad and the Studio Closers