Luna’s Wandering Stars is a physics puzzler from Serenity Forge and the studio’s first game to be released on Steam. Even though the game is all about realistic physics and gravity, this is still a fantastical experience.

Luna’s Wandering Stars tasks you to collect asteroids floating around planets with help from a moon. In each level, you’ll control the velocity of a moon while dealing with the gravitational forces at work.

There are blue and golden asteroids in each level and all you have to do is collect enough to fill the circular bar around your moon to call it a win, however there is more to it than that. To perfectly beat a level, you’ll need to collect at least three golden asteroids whose positions are always in tricky spots. The challenge is that you need to figure out a way to hit the asteroids within the time frame allotted while avoiding enough blue asteroids that you don’t fill up on them first. 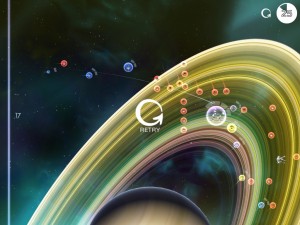 All the while you are being helped by an unseen observer who sends you smarmy messages through a communication log. While Luna’s progression is framed around the planets in the solar system, the planets themselves are merely set up to group the different level types together.

Even though the basic mechanic of using gravitational fields to affect your velocity remains constant, there is a lot of variety and millage thanks to the different puzzle types.

Guide to the Stars:

Each set of levels or planet is framed around a unique twist of the mechanics. For instance, Venus’s levels give you direct control of your moon by using boosters to control your velocity and Earth just lets you alter the Earth’s gravitational pull and the moon’s trajectory is affected because of it.

Luna’s Wandering Stars is a great example of a game built around one core mechanic — Collecting the asteroids while manipulating or dealing with gravity. From there, Serenity Forge was able to expand on that mechanic with a variety of situations that all adhere to the basic concept, but change it just enough to keep the experience fresh.

One of the big problems with puzzle games is keeping the player invested to see the game through all the way to the end. Most often, after playing a puzzle game for a few rounds, the player will get bored after seeing everything and not go for mastery or to the game’s end. Luna gets around this by the fact that every planet is different enough that it allows the developers leeway in extending the game mechanics and the puzzles further. 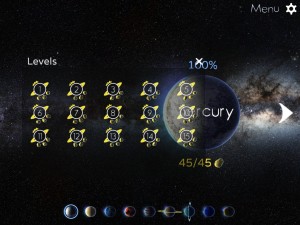 Instead of running out of ways to challenge the player, Serenity Forge has a huge canvas of options open to them: They could release brand new planets and mechanics or create new sets of puzzles built around the mechanics already in place.

There is also a level editor allowing people to create their own custom celestial bodies.

Like other puzzle games, it’s hard for me to critique Luna’s Wandering Stars from a design point of view as puzzle difficulty is subjective. This is a game where the foundation has been nailed down and it shows with the sheer variety of puzzles both within a given section and throughout each of the planets.

If I had to ding the game on any part it would be that some of the puzzles did feel more twitch focused rather than about solving them; specifically those that involve the player actively controlling the moon or the objects around. Some of the later planets in particular have some confusing mechanics with some of the rules not being explained about their relationship to the physics at work which can lead to frustration. 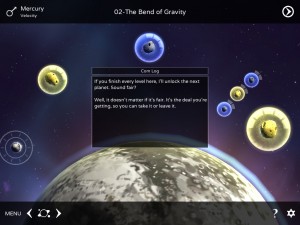 The narrator helps you with tough love

There isn’t much of a story outside of the communications you get which means that there really aren’t any motivating factors to keep playing other than for unlocking the new types of puzzles.

This isn’t a bad thing of course. But for people who are motivated by story or rewards, there really aren’t any here. Despite the simple concept, Luna is definitely a challenging game; more so if you go after the golden asteroid challenges.

Luna’s Wandering Stars is a treat to play; with a well developed core gives the game a bright future. A great example that having a simple mechanic doesn’t mean simple gameplay, it will be interesting to see just how far Serenity Forge will aim for with new puzzles if the game does well.

And if you would like to know more about Luna and Serenity Forge, here is the podcast interview I did with studio founder Z.

Mark of the Ninja Spotlight