Masters of Anima Can’t Get the Marching Orders Right

The Overlord and Pikmin series have been two of my favorite gems in recent years. The third person strategy genre is like trying to fit two different square pegs into a round hole thanks to differing designs and UI to accommodate. Masters of Anima is the latest game to attempt this mix, and it unfortunately suffers in a familiar area.

The story follows a shaper, or summoner of guardians, named Otto. On the day that he passes his shaper test, a great evil is unleashed and his fiancé is kidnapped. Using his newly acquired powers, he must explore the world to save it and his love.

Otto by himself can’t do much, and it’s up to his ability to summon guardians to aid him. Similar to Pikmin, the guardians belong to different classes that are unlocked through the main campaign. Each one has applications in battle and for puzzle solving. There are two areas where Masters of Anima does iterate on the design compared to its peers that help make the game stand out.

The standard structure of this kind of design is having a combination of small enemies wandering around with larger ones as boss fights. Masters of Anima only focuses on large fights in enclosed arenas. Each level has fixed fights where you must take on enemy golems to be able to proceed. The golems feature telegraphed attacks to give you a chance to get out of the way.

You are able to leave groups of guardians around who will auto attack, or have them follow you. Advanced battles with actual bosses will test you on how well you can keep your guardians alive with all the attacks going on.

Instead of your guardians being fixed in terms of abilities from beginning to end, the game has light RPG progression. Completing side quests and finishing levels will net you experience that unlocks skill points. These points can be applied to your various guardians or to Otto for enhanced utility.

While Masters of Anima has a good idea with its basic gameplay loop, the game creates some unintentional pain points that make it frustrating as it goes on.

The main problem with Masters of Anima is with the UI. Controlling your guardians is a big chore, and the game doesn’t really give you the tools needed to make it get easier. Your guardians are by default broken down by their type and you can use the in-game cursor to create custom groups. The problem is that the game doesn’t save those groups, and you are required to draw the cursor on the ground constantly to issue orders.

That wouldn’t be so bad except for one issue: the cursor is tied to Otto’s general position. With larger enemies or groups, it’s very easy to get out of position and leave Otto separated from a group on the field. What ends up happening is that the enemy will start an attack and you will have to rush over to issue the cursor command to select them, then either issue a move or return command to that one specific group.

While Pikmin doesn’t save command groups, your cursor was a lot bigger and faster to respond. Just the overall UI never felt comfortable to me, and even past the halfway point I was making command mistakes.

Compounding the problem is that you can only hold so much Anima to be used for guardian creation at a time. I found that I was either leaving Anima wasted or running out and needing more. If you run out of Anima during a fight and cannot find more in the arena, you will not be able to retreat or win that battle.

Speaking of battling, the combat gets really repetitive due to your limited tactics. The game mentions that you could stun golems with the right special guardian attack, but it seemed like most golems never had a period where they could be stunned. Outside of that, your guardians lack any real sense of personality or greater depth to using them.

General UI issues could be forgiven if the gameplay was interesting, but Masters of Anima struggles to compare to games like Pikmin and Overlord.

Masters of Anima’s structure is built on a collection of levels as opposed to an overworld. Each level will usually introduce or focus on one specific mechanic, and have the enemies to fill in the rest. Unfortunately the levels never reach a point of being interesting. The arena battles and environmental design never mix; leaving the game feeling split down the middle. 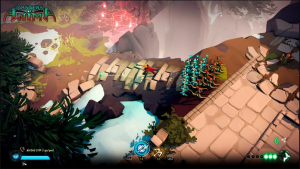 Exploration and combat are kept separate in the game

One aspect that games like Pikmin and Overlord got right with their larger environments was this feeling of exploring with your own personal army. Due to how linear the levels are in Masters of Anima, there’s very little room or reward for going off the beaten path.

Masters of Anima sadly doesn’t deliver that pseudo RTS feel that other games have managed to achieve. This kind of design is very hard to do right due to the inherent limitations of the gamepad. Managing an army on the go is never easy, and I hope that this isn’t the last attempt we see a developer make at the design.