The adventure genre has certainly come a long way since the days of old school design and found a revival over the last few years thanks to Telltale with their focus on narrative instead of puzzle design. And while it has helped grow the fan base, many old school fans miss the days of puzzle solving. With Moebius, adventure game designer and writer Jane Jensen is looking to the old days with some modern ideas.

(This analysis will be lightly spoiling the plot of Moebius, mainly the early parts of chapter one. There will be nothing about the greater plot and gameplay examples are kept to a minimum.)

The main character of Moebius is Malachi Rector, an antiques appraiser who gets jobs around the world analyzing antiques for their authenticity.  One day he is asked by a strange organization to do research on a woman who was recently killed which leads to him becoming involved with world changing events.

Moebius feels a lot more like classic adventure games compared to the recent offerings from Telltale and other modern titles with an inventory, puzzles and even as little score to show how well you’ve played. The game is broken up into different chapters as Malachi goes around to various settings to crack the mystery.

Puzzle design is interesting in Moebius, featuring two different types of puzzles. The first are your usual puzzles that you would find in an adventure game: Something or someone is blocking your progress and you have to make use of items to get around. Using inventory items is simple enough and the limited available environments in one area helps to keep things from getting too crazy. 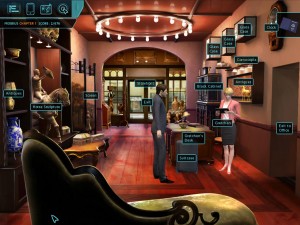 The option to see all interact-able objects in a room with a push of a button, helps cut back on pixel hunting.

To help you out, pressing space will highlight all interact-able objects on the screen, perfect for letting you know what items could be used and avoiding the pixel hunting nightmare of older adventure games.

Another aspect that I like about these puzzles is that the items in question aren’t used in crazy unreal ways, but their original use for a unique purpose.

There is one quirk about the puzzle design that I should mention. Keeping with the somewhat grounded nature of the puzzle logic, you won’t be able to pick up every object you find, even those that are a part of puzzles. The reason is that if Malachi isn’t in need of them at the moment, he won’t pick them up. This leads to some forced backtracking that is a little annoying, but does help keep the game somewhat grounded.

The other type of puzzle involves Malachi’s analytical abilities and reading people and objects. Besides doing his job of looking at antiques, the player can also examine important people to the story. In these segments the player has to put together an accurate profile of a person or object using what they know about them and any important physical details.

Advanced puzzles take the form of tying a person to a famous historical figure and using clues that you discover in the area to figure out the correct person. I enjoyed these segments as they are something different from traditional puzzle design and these parts also help you when it comes to conversations and the other puzzles. 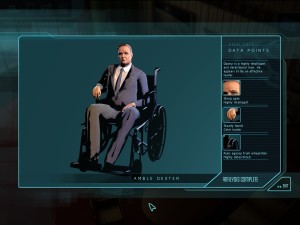 Examining people and objects were a nice change of pace which I wish was included more in the gameplay.

Difficulty wise, I found everything to be medium in terms of challenge. However, keep in mind that I don’t have a classic adventure game background and can’t compare Moebius to them.

There wasn’t any one puzzle that I was stuck on for long and it only took a few minutes of critical thinking to get through. Moebius also comes with an optional hint system if you need it.

As you play through Moebius, there are sections where the player will have to make choices which the game seems to take some consideration with how the story moves on. However at this time, I don’t know if the story takes a huge turn based on your choices, or if it’s smaller effects leading to the same path like in The Walking Dead.

Moebius’s story was okay and the appraising puzzles were different from the norm. I do like how the game focused on investigations and using clues as opposed to esoteric puzzle design of older adventure games. However, where Moebius slips up is in the presentation department.

Presentation wise, the problems with Moebius can be split between aesthetic and UI and we’ll start with the aesthetic. Moebius’s character models are just poor in my opinion: Characters have this inhuman quality to their facial animations, physic and general stature.

Watching a conversation between Malachi and his assistant, his mouth didn’t seem to open while hers seemed to contort while she was talking. Characters seemed to walk and gestured oddly and quite frankly they look straight out of an adventure game from the early 00s right down to almost everyone having freakishly broad shoulders.

Now normally this wouldn’t be a glaring problem if it wasn’t for how clean the backgrounds were and how in some places they had this almost hand-drawn look to them. The character models are so poor that they create a dissonance between them and the world around them and it was distracting.

What’s worse was that I noticed multiple animation and model bugs where characters would quickly spaz out of control or in one case, Malachi head literally sunk into his neck while he was walking.

The UI also seemed stuck in the past, relying a lot on clicking as opposed to hot keys. Speaking of clicking, I could not find a way to simply move Malachi around using the keyboard and instead had to do nothing but clicking. This was very annoying in cases where a single “room” extended across multiple screens, requiring the player the click to reach one end of the screen, then do it again until they are as far over as possible. Simply establishing set screens and allowing the play to move between them would have been smoother. 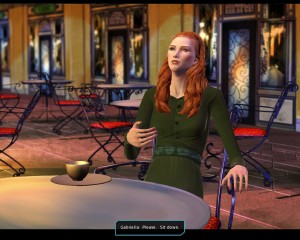 Character models and animations looked off and somewhat poor quality compared to the backgrounds.

I also ran into some bugs where you could skip the dialogue of some conversations, but others you had to listen to for no apparent reason.

Also skipping conversations would cause the animations to play out in fast forward, adding to the disconnect between characters and the background. There were also cases where the game simply hung and I was unable to do anything for a few seconds which cropped up frequently.

The technical and aesthetic issues are a shame as otherwise Moebius was a good game. The story kept me interested to the end and it was great to play an adventure game that was on the longer side to tell a more involved story. One of the negatives of episodic gameplay is that the story has to be broken into multiple acts and the overall game can be somewhat short.

Moebius in keeping with the use of puzzle solving does extend things and it helps to make the game seem like an old school game in the sense that you are a part of this grand mystery as opposed to watching a five part mini-series. On our podcast with Jane, she talked about hopefully turning Moebius into a series and I would like to see this grow.

The only problems story wise that I have with Moebius is that the final chapter ends somewhat abruptly in my opinion with very few answers which heavily hint at more games in the Moebius universe. And for all the hints the games throws at the player regarding Malachi’s unique gifts, I would have liked to have seen more gameplay uses of them as opposed to cut scenes and more involvement with Malachi’s appraisement job.

With a better presentation to tie everything together, the hook of playing an adventure game with a focus on investigations I think would do well as an alternative to the episodic structure of Telltale. It will be interesting to compare Moebius to the upcoming Blackwell Epiphany to see which adventure game gives old school design more justice.

Can Game Design Be Appraised?