Sang-Froid was one of many games added to Steam’s Greenlight service this year and has one of the most out there concepts for a game: 19th century Canadian lumberjacks fighting werewolves sent by the Devil. With a name like Sang-Froid and not the best looking graphics, it’s very likely that a lot of people passed on the game on those alone.

But underneath all that, we have one of the best diamond in the rough examples for this year.

As mentioned the story involves lumberjacks fighting werewolves. Two brothers who hate each other are forced to work together when their sister is being pursued by the Canadian Devil, who apparently is a sharper dresser than our American Devil.

It turns out that werewolves in Canada are dogs and wolves who are possessed by evil souls and every night a pack of wolves, werewolves and other strange creatures assault the brothers’ cabin in the woods.

The gameplay of Sang-Froid is an interesting mix of ARPG design and tower defense. Each stage of the game takes the form of a day, with strategy and planning done during the daytime and fighting at night. Every day you’ll be able to see how many waves of enemies are coming, where they’re coming from, how many and what their plan of attack is.

Your job is to kill every enemy on the map without dying or losing one of your buildings and as time goes on, more of the forest will open up giving you more paths to deal with and buildings will be constructed that need to be defended.

From the strategic map you can place down various items and traps that can be used during the battle. Items can cost action points which limit how much you can put on a single day and money which is earned by surviving and killing wolves. 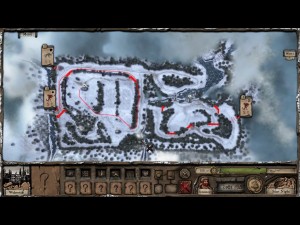 The ever expanding game map will require different tactics each night to deal with the various threats that are coming for you.

Money is not only used for placing items but also for equipping your character at the town. You can buy new gear, consumables and get your weapons blessed to make them better against unholy enemies.

However,  money carries over between days and you do need to juggle between making one day easier and having enough to prepare for the next day.

Completing days will also earn you experience which each level up awards a skill point that can be put towards a skill tree. Skills can enhance traps, the brother and other areas.

Once you’ve made preparations, you start the night segment which takes the form of third person combat. As you run around the woods you need to keep track of your stamina which determines how often you can run, dodge and attack. Stamina recovers over time but if you’re being swarmed it’s very easy to run out.

Besides a close range weapon you also carry a rifle, however since this is the 19th century, the weapons are single shot with a ball and powder reload. Guns do a lot of damage and are used to trigger some traps, but it can take up to five seconds to reload (skills can improve the reloading time.)

Another interesting element of Sang-Froid’s combat is the fear factor attribute. Killing wolves and using your shout ability raising your fear factor rating. As long as your rating is higher than the wolves, they will not attack you which gives you precious seconds to recover or reload your weapon. Fear factor degrades quickly with some place able items can sustain it for a longer duration.

As the game expands, you’ll soon be able to place down structures that can aid you and any item that costs money will stay on the map until they are used or destroyed. The enemy variety was well thought out in Sang-Froid as you’ll be fighting different types of enemies who are susceptible to different types of damage.

The beauty of the game’s design comes from the fact that the gameplay takes place on one ever expanding map. This allows the map to take on a personality of its own as it grows and you fill it with items to aid you. The game does a great job of allowing you to make plans and forcing you to go between plans A, B, C and so on. 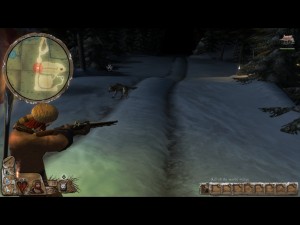 The balance between traps, ranged and melee combat will require you to plan accordingly.

Traps do a lot of damage, but are very conditional and may not work on every enemy. Your gun can be equipped with different ammo but the reload times can be a killer.

Finally you have your axe and consumable items, but you need to thin the numbers before really attempting melee combat.

Sang-Froid has a lot going for it in the gameplay department, but the game’s biggest problem is that it does not make a good first impression.

Sang-Froid is the first game from Artifice Studio and is very much an Indie game. The production values are very basic, with so-so voice acting and decent graphics. The only element that I liked was the almost folk song soundtrack used. 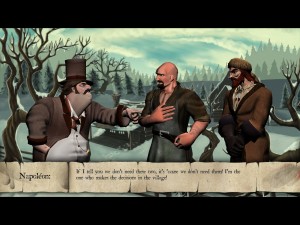 The cut-scenes and voice acting will not impress compared to other indie titles.

Subjectively speaking, the game doesn’t “pop” compared to other Indie games released this year.  The graphics don’t lend themselves to a unique art style and the gameplay isn’t as easily explained as other Indie games like Don’t Starve.

The game has a lot of different screens you have to go through over the course of a day: map screen, inventory screen, skill screen, two towns and then shop screens for each building. I feel that things could have been condensed here just to make the game go quicker.

While the developers did a great job of expanding on the enemy designs and traps, I would love to see the meta-game of defending a single area of land improved upon, such as having more items or choices to make. Even with the different enemies and traps to juggle, the game does start to become routine once you’ve encountered all the different enemy types.

Sang-Froid is a surprise hit for me this year, delivering unique gameplay and an inventive take on the strategy genre. If you can look past the aesthetics, you’ll find a great game and a studio that I hope we see more from.