The End is Nigh Review — Apocalyptic

Edmund Mcmillen is no stranger to challenging and weird games. Super Meat Boy was one of the most skill-intensive platformers released in some time and it would be easy to think that it would be the apex of platformers. However, Edmund is back with Tyler Glaiel with The End is nigh, and I think they’ve managed to top our favorite meat boy, but that’s not necessarily a good thing.

One is the Loneliest Number:

You play as a living flesh ball named Ash. The end of the world has already happened, and he’s the last intelligent thing on the planet. All alone, he’s been playing his favorite video game for years until the day it breaks.

With nothing left, he has decided to go out into the world to find what he needs to build a friend. Standing in his way is one unforgiving world, the remnants of all life, and a lot of platforming.

Similar to the Binding of Isaac, your task is to get through screens of challenging traps and platforming. Die and you’ll quickly respawn back at the start of the room. Your actions are kept very basic: You can run, jump and have Ash duck.

One big difference between this and Super Meat Boy is that you cannot control Ash’s speed; he’s always running. That means your velocity is always being affected by your speed and you can’t control it. The one chief mechanic that is new is the ability to hang from any edge and use that to either boost up or launch in the opposite direction.

Even though The End is Nigh looks like Super Meat Boy, there are a lot of surprises to find at the end of the world.

The End is Nigh is a linear game as you go from room to room to the end, but there is a lot to find. Tumors are hidden in most scenes and will require you to grab them and leave the room in order to collect them. Finding enough tumors will unlock even harder (if you can believe it) levels to play through. There are secret screens and even secrets within secrets waiting for you to uncover them. As with Super Meat Boy, you can play “retro” inspired games for bragging rights and achievements. 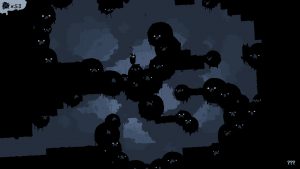 Expect a lot of challenging platforming

The challenge of The End is Nigh is up there, as with Super Meat Boy, but this is a case where I feel the difficulty may get in the way.

Understanding the timing and movement of Ash is critical for surviving the game, but the movement in The End is Nigh does make things harder than it should be.

As mentioned, there are no fine controls for controlling Ash compared to Super Meat Boy. Because you are always moving at run speed, it makes it very easy to run off edges and hard to make micro adjustments. The bulk of the environmental challenges are built around committed jumps, IE: You must do it all on a single motion or you’re going to fail.

The game also doesn’t feel as inventive compared to Super Meat Boy. There are less unique challenges and situations in it; along with no boss fights.

I also found it sometimes unreliable when I tried to grab edges or fall in-between obstacles. You have to be very precise to the point of almost pixel perfect to get it.

This is all well and good for the main game, but The End is Nigh commits a cardinal sin when it comes to difficulty.

My Only Friend the End:

The End is Nigh for the first part of the game keeps the difficulty fair by the fact that you can repeat every level as long as you want. Unfortunately, that rule disappears for the game’s “hard mode.” In hard mode, you have a shared life pool between all the levels that will force you to repeat things from the very start of the mode when you die.

Not only that, but all the levels have been remixed into harder, and more precise variants. Given how finicky the controls are, putting a limited life span on top of that was one straw too much.

A game like the End is Nigh is not really designed for having a fixed limit on playing, and takes the game into cheap territory.

The End is Nigh tries to be the next Super Meat Boy, but makes the mistake of confusing difficulty for challenge. This is a game that most people will not be able to get through. If you’re looking for one hell of a difficult platformer, then this is for you, but don’t say that I didn’t warn you.

The Power of Playtesting