The Marvelous Miss Take by Wonderstruck is a stylish stealth game built around being a professional thief. While it may lack the grittiness of realistic stealth games, this game definitely has the bite and frustration of the stealth genre.

The story of the game is that you play as Sophia Take, who was supposed to receive a fantastic art collection left to her by her aunt when it was taken by a businessman. To get it back, she becomes a gentleman (or gentlewoman) thief to take back the collection.

The Marvelous Miss Take has a great aesthetic look to it with a very clean UI. The stealth detection is based around vision and noise. Guards patrol around the level with their detection radius clearly shown. You can also run or whistle to send out sound waves to alert a guard.

If a guard gets a glance of you or hears sound, they will start investigating the general area. Get spotted for too long and let the detection meter fill up and the guard will start chasing you; if they catch you the level will end but you can restart pretty easily. Each level checkpoints between floors so there is very little progress lost on failure. 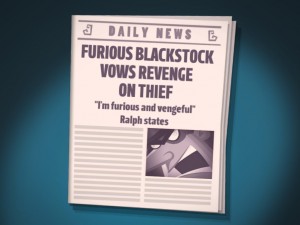 The story remains lighthearted, despite the challenging gameplay

The twist of the game’s stealth mechanic is the fact that guard patrol patterns are randomized throughout play. When you start a level, they will start in the same area, but will patrol and look in various directions differently.

This is a huge deal as getting through a level is somewhat luck based, despite your available options. The developers make it a point to say that playing the game is about distracting the guards, with gadgets, vision and noise to get around safely.

As the game goes on, you’ll have to deal with cameras, dogs and bigger and bigger levels to explore. While the graphics and basic gameplay make The Marvelous Miss Take seem like a casual experience, the developers added in extra challenges for the hardcore fans.

The basic challenge of each level requires you to steal the required amount of paintings doesn’t change as you go through the many stages; however the developers did create side challenges to help spice things up.

Each stage has a par time that you can try and beat along with a masterpiece item that will alert guards once you take it. Completing extra objectives will give you more paintings back at the home or hub area and is another example of trophy screen achievement design. 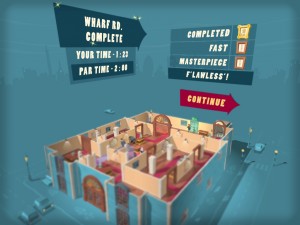 Beating a level isn’t too hard, but the side objectives and characters add to the challenge

As the game goes on, you’ll unlock two other thieves who replay the levels with new objectives and conditions. For instance, you’ll quickly unlock Harry who can distract guards with a bouncing device but can’t run.

His side objective isn’t built around time but by getting through a level without anyone seeing you.

These bonus and harder challenges were a smart move by the developers and give players something else to go after while providing that little extra difficulty for advanced fans of stealth games.

Unfortunately besides a small technical issue, The Marvelous Miss Take’s take (no pun intended) on stealth design may rub purists the wrong way.

As mentioned, guard patrol patterns are random after their initial placement at the start of a level. The debatable problem with this from a stealth design point of view is that it sometimes leaves whether or not you’ll succeed up to luck and not player skill. Many levels feature narrow corridors with no hiding spots that you need to get around; and it’s very easy to get sandwiched in by guards whose patrol pattern takes them in your direction. 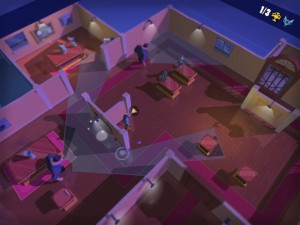 Going after the side objectives can become a pain for this very reason; in one level it took me multiple tries to get through it perfectly due to the patrol pattern coming up unlucky for me.

And there were plenty of cases where going for the par time side objective proved impossible due to the guards refusing to get out of the way and it would take too long to distract them. On the plus side, the game is very generous with the checkpoints and the floors are small enough that the levels are only a few minutes long.

The controls also cause some issues. Clicking on parts of the map will move your character there, but if it’s not a straight path, the game may choose a way in front of guards or cameras. Trying to move around small objects or close to guards is tough due to how the camera shifts based on the movement of the character.

One technical issue that people have reported was weird framerate dips during play. While it’s not damning, it can become annoying during play.

The Marvelous Miss Take is full of many surprises. Don’t let its appearance fool you, as the game does become tough. But depending on how well you like replaying content, this museum job may be too frustrating to go for the big score.