The Kingdom of Loathing has been a surprising hit in the free to play market for now over a decade. And there was some surprise on my part that the developer was interested in moving into the single player RPG genre with West of Loathing. And yet, the game not only turned out great, but may be one of my favorite RPGs this year.

You don’t need to have a background in Kingdom of Loathing to play West of Loathing. All you need to know is that cows have gone evil, meat is money, and everybody is a stick figure. Your quest is to leave the confines of your family’s farm to head into the Wild West for fame, fortune, and to make as many jokes as possible.

You’ll choose from three classes which will determine your stat focus and unlockable abilities. As with Kingdom of Loathing, everything is built on your stats. Muscles, Mysticality and Moxic will affect not just combat, but potential options throughout the world.

While the game does have an endpoint, there are a ton of sidequests and points of no returns to make repeated visits different. You may think that the lack of voice acting and stick figure aesthetic would hurt West of Loathing, but the game is a great example that a great aesthetic is not held to graphical power.

West of Loathing’s combination of storytelling and aesthetic certainly make it greater than the sum of its parts. From the descent into spittoons, to fighting all manner of skeletons, the game keeps you invested in its stick figure world. 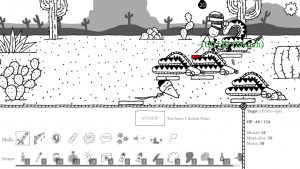 I had to laugh out loud a few times from the crazy writing and situations that can happen in the game. Some of the enemy designs and environments are amazing to see brought to stick figure life.

While we have been talking about the story and aesthetics, West of Loathing is no slouch in combat.

West of Loathing’s combat was designed around quick battles. Fights are turn-based between your side and the enemy. There is a huge variety of items that you can use in battle to help turn the tables. Action Points or AP is consumed to use your class’s special skills.

Stats are the name of the game when it comes to combat. A big enough stat difference will neuter either side.

There are a lot of different enemies to fight in the game, but combat never becomes a slog. I think the most time I spent in a single fight was about two minutes.

West of Loathing deserves praise for effortlessly balancing casual and core RPG players with the design. The game be default will auto allocate experience if you just want to follow the story. There really isn’t too much I can complain about with the game, and I just have a few nitpicks to go over.

For those of you expecting to see complex RPG gameplay, West of Loathing never reaches that point. Even by the very end of the game, I knew fairly easily whether an encounter was winnable or not. The only legitimate problem I would say with the game is that like Kingdom of Loathing there is a lot to remember. 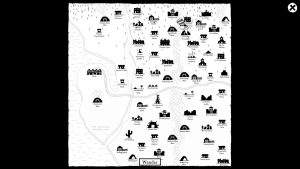 It’s very easy to get Lost in Loathing

It’s very easy to forget where a quest was or what you were doing in a previous area. A quest log would help out in this regard. As a final point, while it may not look it, West of Loathing has some deviously tricky puzzles to solve.

West of Loathing is easily one of my favorite games of 2017. The care and attention to the world, writing and aesthetics help to elevate it. While it may not be for the hardcore RPGer, if you’re looking for a well written game where spittoons hold treasure, cows know the dark arts, and skeletons are very talkative, then you want to play this game.

If you want to see it in action, you can watch my completed playlist over on the Game-Wisdom YouTube channel.

Successful Tips for Kickstarter with Gamerati