Black Mirror’s Bandersnatch on the Illusion of Choice

As one last bit of 2018 craziness, the hit Netflix series “Black Mirror” unveiled a very ambitious episode called Bandersnatch, which was designed as a literal choose your own adventure tale turned into a show. In return, I get to talk about a TV show/CYOA book/videogame all in one here. While the show does definitely capture the feeling of a game, how far does it go with this concept, and what game design lessons are there?

The following post will be containing spoilers for the episode’s plot and general format; please don’t read on unless you’ve gone through it already.

Bandersnatch follows a programmer in the 80’s by the name of Stefan, who has grown up with depression and anxiety over the loss of his mother. He is working on an adventure game based on a novel called Bandersnatch, and is going to work with a premier game studio to get it done with over the summer.

Within a few minutes the episode’s twist becomes clear, as we have to decide what cereal Stefan eats in the morning. From there, choices pop up every few minutes that lead to different outcomes for Stefan. Each time a choice comes up, the audience is forced to choose; “no choice” is not an option here.

The first major crossroad in the episode is to decide whether or not Stefan works directly with the studio on his dream game, or to work alone over the summer. If you choose to join the team, the story line ends and the viewer is given their first “redo.” From there, we’re introduced to the core group of characters that occupy Stefan’s life.

There is his father who he lives with, his therapist who he will see regularly throughout the episode, the head programmer/designer of the company, and the owner of said company who wants the game done as soon as possible.

The other major tidbit we learn is that the author of the book went insane and killed his wife thinking that he was being controlled by outside forces.

As the episode goes on, we continue to make incidental choices for Stefan, such as what record he buys at the store, but then things start to branch out.

Stefan continues to become more stressed out with working on the game, and as the audience, we’re able to decide how he reacts to certain events. There are several “dead-ends” written into the episode — such as having him destroy his computer instead of yelling at his dad.

As Stefan continues to feel helpless, he begins to realize that someone is controlling him, and one of the funniest endings involves indirectly explaining to Stefan what Netflix is. While this is the funny ending, the rest are darker.

Depending on your choices, Stefan could commit suicide, murder his father, or learn some disturbing truths about his life. That last point takes us to the deeper part of this episode from a design standpoint. 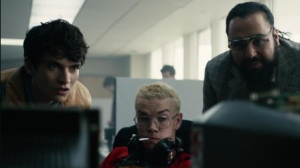 Get used to these faces, you’re going to be seeing them again and again

For viewers who pay attention, there are certain events that once viewed permanently change your options and what you see going forward.

Stefan will remark already doing something and the scene will move faster as a result for one example. Several of the show’s endings require the audience to watch and interact with other events to then go back and alter things.

Astute watchers can see endings where Stefan discovers a grand conspiracy surrounding his life, goes back in time, and more. Each time you do reach an end, the show will let you go back to a previous point, but the show picks what the rewind points are, not the viewer.

The show’s major philosophical question is about the concept of choice — Are we really masters of our own fate, or is there some unseen guide that pushes us? Are we able to do anything we want, or are we just acting out roles given to us? In one of the endings, Stefan finished the game by going with the concept of not giving the player free will in the game, but giving them the illusion of choice.

This is perhaps the most interesting concept that the show, and by extension, game designers face when it comes to game design.

The Illusion of Choice:

This is a topic that I’m well versed in, as I’ve talked about the illusion of choice on a number of occasions. Bandersnatch hits home at what choice means in videogames and the “failure” of modern adventure games that try to convince the player that they’re in control.

Videogames are a fixed element: all aspects of a game are decided upon by the developer. Even procedurally generated titles are built on an algorithm that determines how things work. Story-driven titles will never give the player full choice on the matter, but are about trying to trick the player into thinking otherwise.

The concept of emergent game design is the closest we can see games coming to giving the player free will within a gamespace.

Longtime fans of mine know how I completely fell out of love with Telltale Game’s storytelling after playing the Walking Dead. The challenge when it comes to choice in videogames is that you need to figure out how much to give the player in your title.

Gamers want to do be able to do everything

For many action-based games, choice comes down to how you build your character, while leaving the narrative alone. If you give the player too many options, then you are going to have to work harder to keep the illusion going (something that Telltale failed to do). On the other hand, if there are too few options, then you are going to have to rely on your linear story keeping player invested to the very end. There is no wrong choice here, but you have to commit fully once you’ve decided.

One of the best examples of a game giving the illusion of choice would be Prey 2016. Without spoiling it, the game not only keeps track of what the player has done, but alters the story and conversions based on your actions. Regardless, the player always feels like they’re the ones in control, despite how the game guides them via the plot and circumstance.

Through the Looking Glass:

For people wondering about my thoughts on the series itself, I’m not a huge fan of Black Mirror, and this is coming from someone who considers the “Twilight Zone” to be one of the greatest works of fiction ever made.

My problem with the episodes I’ve watched (going through seasons 3 and 4) is that the concept or trick never feels fully developed. There’s no greater story or insight into the topic other than “let’s take X and make it stranger or bad.” The biggest distinction for me when watching Black Mirror compared to the Twilight Zone is that despite being over 50 years old, the Twilight Zone still holds up in my opinion.

This is due to the stories themselves going beyond the initial premise and saying something about the human condition. The surface layer exploration of Black Mirror feels entirely rooted to this point in time; at least with the episodes I’ve seen. While episodes like The Howling Man, The Obsolete Man, and Number 12 Looks Just Like you, have deeper meanings to them that are still being explored to this day.

With Bandersnatch, it’s definitely on the low-end of the CYOA formula. There aren’t enough choices or permutations I feel, with many adventure games having done more with this style — See the Infectious Madness of Doctor Dekker as an example. 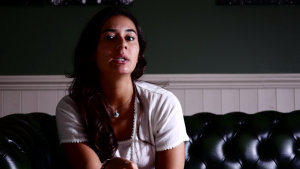 I would have liked to have seen things go “full tilt” once the cards have been laid out on the table. The show hints at the prospects of alternate realities, but we really don’t see it.

Given the craziness of the Netflix ending, I was hoping to see things truly go out there: Swapping the father for the mother as the parent who died, more things going on at the game studio, and I could think of even weirder examples.

As someone’s first visit to the CYOA formula, Bandersnatch works in that regard, and who I think was ultimately the audience for this.

Choice in videogames is a very complicated topic. No matter how many you have, players will always want more. In my opinion, it’s better to have viewer, but more meaningful choices, than saying that the player has complete control over everything…and less chance of you going insane in the process.

The Messenger Aims a Little Too High With its Design