Intelligent Systems has been one of Nintendo’s secret weapons when it comes to innovative and underrated franchises. Despite being over 30 years old, the company’s best franchises stayed in Japan until the early 00’s. During this time, Nintendo used the popularity of their Game Boy Advance line as a way of testing out franchises and designs in the US that may not have succeeded on the console. One of those franchises was Fire Emblem, which has become a massive success along with a very popular mobile game.

But for today, I want to talk about their other franchise, and how fans of turn-based strategy might have missed one of the best sleeper hits.

The original game in the franchise was Famicom Wars in 1988 (as a point of reference, the first Fire Emblem was released in 1990). It was one of the first turn-based strategy games to be released off the PC, but was never ported over here in fear of it not being well-received.

Advance Wars became a huge hit for both Nintendo and Intelligent Systems. For most of the world, the strategy genre has always been seen as a PC only experience; with some of the best — and most complicated– games staying platform locked.

Advance Wars was designed to be the perfect entry point for new players to the genre. The game featured bright and detailed pixel graphics to draw players in, and tutorials and missions were designed to ease players into it.

The success of the franchise not only proved that strategy games could work off the PC, but there was a market for it. The impact would be felt for years to come; with recent examples like the XCOM franchise and Mario + Rabbids Kingdom Battle. 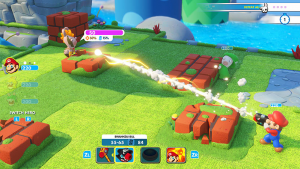 strategy games off the PC have come a long way

As for the story, players took control as an adviser for the Orange Star army helping their commanding officer (or CO) Andy in battle.

When nations suddenly began to attack, it’s up to the player and Andy to prevent a world war. Over the course of the four games in the franchise, the core gameplay loop stayed consistent and provided a variety of turn-based challenges.

(Not So) Modern Warfare:

Each game in the series was built on the same model for its design. Players control one army on a preset map fighting against the AI. Both sides take turns in controlling their units and building additional ones. The units in the franchise are standardized across the factions: from infantry to recon units, and of course rocket artillery and massive bombers.

There was a basic rock paper scissors formula in terms of units being stronger or weaker to other classes, but the two main factors were terrain and health. Attacking a unit who was in a forest or mountain tile would give them additional armor to absorb damage. The actual damage done when attacking was dependent on the health of the unit. A unit with one point of health left was practically worthless in a fight.

Different maps would have conditions that you would have to meet or deal with in order to win — ranging from fog of war, escort missions, and even “boss” fights. The variety of mission types would evolve considerably over the four games in the franchise. The third entry “Dual Strike” introduced battles that took place on two different screens and sometimes fighting a colossal enemy. 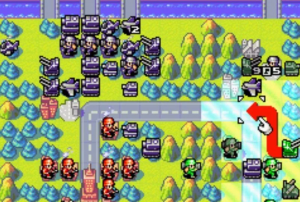 The heart of the series was with the various COs, and this also created added depth. Even though every faction had the same pool of units, the COs would bring big differences to combat.

Every CO had a passive that would tilt the units towards their preferences. Max — who was the tank loving CO — would do more damage with his direct fire units, but suffered a penalty using ranged units.

Over the course of the battle, COs could activate a special power that would further enhance their units or weaken the opponent, with this growing into a two tier system in later entries.

This slight asymmetric design helped to make the Advance Wars franchise stand out. Not only did you need to think about combat at the tactical layer, but you also had to take into account your CO and the opponent’s.

In 2008, fans of Advance Wars would get one more game in the franchise subtitled Days of Ruin which also operated as a soft reboot. Taking place in the future, all the characters, factions, and story from the previous games have been wiped clean. It’s a post apocalyptic future where humanity is barely hanging on after a devastating plague.

The roles of the COs were greatly diminished in favor of doing more with the individual units. COs don’t have passive impacts on their entire army, and instead feature a local effect that can be charged for a global one. Veterancy was added to reward players who kept units alive longer during combat.

The game went for more of a cinematic tone — with more cutscenes and dialogue between the missions. From a design standpoint, Days of Ruin was reviewed positively. However, the complete change in brand and tone was a confusing inclusion. There have been talks online that this was Nintendo’s way of trying to appeal more towards the western market which had grown thanks to the previous games.

Despite the overall success of Advance Wars, Fire Emblem became Intelligent System’s standout franchise, and I have a few thoughts about that.

Advance Wars was always about fielding nondescript units, with the COs providing banter and a POV. Fire Emblem tells a far more personal story with every unit on the field being a unique individual with a story that grows from battle to battle. Each person has their own unique stake in the story and with the other teammates; creating a soap opera on top of the tactical play. 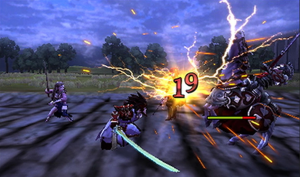 Fire Emblem came back in a huge way

Losing a tank in Advance Wars is nothing compared to having your favorite archer get killed due to a mistake. Both series have operated on the harder side of the TBS formula, and we could argue that Fire Emblem was the more extreme example for some time.

If you lose your best characters or don’t have the proper counters for a mission, you may enter an unwinnable position.

That all changed with Fire Emblem Awakening in 2012, which as the story goes was planned to be the series finale. Awakening was Intelligent System’s last chance to put everything they had into one more Fire Emblem game, while trying to make it the most accessible. Difficulty levels were introduced, the option to turn off permadeath, and quality of life and new systems were added.

Nintendo told Intelligent Systems that they would have canceled the series if Awakening didn’t sell at least 250K units; it is estimated at this point that Awakening has sold over 2 million copies.

It’s interesting to compare Awakening to Days of Ruin in terms of their response to the market. Awakening’s strategy was to be more accessible and inviting to new fans, while Days of Ruin went for a tonal shift in an attempt to appeal more towards their supposed fan base.

As of last year, it would have been the 30th anniversary for the Wars franchise, and the perfect time to reintroduce gamers to the Advance Wars series. With Intelligent Systems firmly committed to Fire Emblem now, we may not get another game in this seminal turn-based strategy franchise.

Regardless, the series is easily a must play for anyone who likes turn-based strategy design. Advance Wars proved that the genre wasn’t just meant for PC gamers, and was one of many franchises that began to break down that wall between console and PC fans.

With Wargroove released a few weeks ago, it’s the closest we’ve gotten to an Advance Wars follow up, and I hope is a sign that this kind of design will make a return in a big way.