The Competition of Sportsmanship in Online Games

Last week there were two showings of competitive games on the internet. One was the first MLG Starcraft 2 tournament of 2013, where competitors gave each other respect and played in sound proof booths.

The other was a video put up by Eurogamer showing how competitive teams from Call of Duty: Black Ops 2 react during their games at the ESL matches. And it was a complete opposite to the well mannered SC 2 players. The concept of Sportsmanship in video games has always been very loose, but is it time to start cracking down?

Blowouts, swearing, racist remarks and far worse have sadly been a part of playing online since the 90s. When you combine the adrenaline thrill of playing, with complete anonymity it becomes the perfect storm for lashing out.

In early online games outside of MMOs, designers did not have a way to track or report poor behavior and they let it slide. But even with reporting tools that didn’t stop people from lashing out. One of my early memories of playing World of Warcraft was with a girl who because the quest chain bugged out and didn’t reward her, gave her the right to go on a five minute rant cursing into the chat channel.

Because of the importance of having players fill their servers, designers are stuck between a rock and a hard place. On one hand if they want to keep the atmosphere friendly for new players, they have to crack down on unsportsmanlike behavior. But if they upset their core base and they decide to leave, the designers lose their main audience.

As we entered the last decade with the rise of online services like X-Box Live and Steam, the ability to tie people to their online personas became greater. Now, that person who just went on a racist rant can be tracked to their account and disciplinary action can happen.

Unfortunately like with most systems that gave power to the users, it was open for exploitation. There have been many cases where someone would report someone just to get them in trouble or having someone get banned who was just responding to the offending player.

Another major problem was coming up with an actual guideline that could be followed. For instance, trying to figure out if it was worse to say F#$k a few times in a sentence or making one racist remark.

Interestingly, League of Legends who redefined competitive and Free to Play design has also been making strides in sportsmanship.

If there is one stigma that anyone knows who has heard of League of Legends, it is the unhealthy community that plays the game. Because matches are tied to online rankings there is another layer of tension to playing a League of Legends match. One bad player can effectively ruin an hour of everyone’s time and their ranking beyond the match.

Even some of my friends from my Left 4 Dead days, have gotten into “spirited” debates playing a casual game of League of Legends. Riot knows this and has been doing what they can to change their image. First there was just “The Summoner’s Code”: which was their rules of sportsmanship that of course everyone ignored. 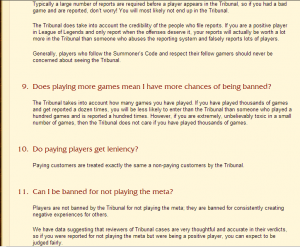 The Tribunal rules exist above any player regardless of their status in the game.

Then they added in the Tribunal and took a greater step towards enforcing. The Tribunal works on two layers: Rewarding good sportsmanship and punishing poor sportsmanship.

Riot plans to give points to people are who are complimented during their matches which can be traded in for skins and other rewards.

After players have reached level 20 in the meta-game, they are allowed to participate in the tribunal. If a player is acting poorly during a match, another player can start a case against them. Chat logs and videos of the offending player can be viewed by the people who are a part of the tribunal case. And if the evidence points to the player being poor for the community they will be punished. The people who were a part of the tribunal also receive some points for participating.

Riot has shown their commitment to this system with League of Legends and has issued permanent bans to competition level players who were repeat offenders, a huge difference compared to other developers.

The Boys Will Be Boys Debate:

As playing games professionally moves further into the spotlight, the backroom antics that are commonly associated with online games has to be toned down in my opinion.

Companies like Riot with their reporting system, or MLG who has rules of conduct are a great first step. However there are some who don’t agree with that. In that Eurogamer video linked above, one of the people from the event responded about Eurogamer’s criticisms and said that it’s normal for people to become heated during a match.

“This is no different to sports such as football and rugby, where competitive spirit and banter are part of the mind games that take place between teams…”

Personally I find that to be BS. First, having been playing video games both online and off for so many years I’ve never cursed or said anything racially offensive at someone while playing.

I agree that things can become heated while playing a video game, but for the vast majority who isn’t playing competitively, there is no excuse for the outbursts that we see.

Second if competitive playing wants to become bigger and more accepted then it has to grow up. In any major sport, the top athletics always have to act professionally as they are supposed to be the cream of the crop. If you can’t hold yourself to be professional during a match, then you are not right for being a competitive gamer.

Most gamers who have made the jump to competitive games did it out of their skill at playing and not from their behavior. This is why we unfortunately see a lot of cases of bad sportsmanship among competitive tournaments. And why we had that incident last year at a Street Fighter tournament where someone said that sexist remarks were a part of the community.

Online games have been steadily growing and becoming mainstream. On the podcast a few weeks ago we talked briefly about MLG’s plans to create a game that is exclusively tailored to competitive gamers and tournaments. Both as a way to grow the E-Sports market and to give people a new type of game to watch on their channels.

Given the success of games like Team Fortress 2, League of Legends and more at promoting competitive play and the growth of the market, it will be interesting to see if we’re finally going to have a turn around on how the online community behaves.