The Wii U has been hit by hard times lately, as C-Net reported that the console only sold around 57,000 units in the month of January, making it one of the worse showings for a console.

Looking at the future there isn’t much to go on with the Wii U, with slim pickings and not much from Nintendo with official release dates. There has been a lot of doom and gloom thrown around at the Wii U, from people speculating that Nintendo is going to drop out of the hardware market.

The one question that is on everyone’s mind is: What happened to the Wii U?

To understand why the Wii U is having so much trouble now, we need to look back at the Wii. Nintendo for the entire GameCube generation was always behind the other consoles. One of the main reasons was that the GameCube was not a popular system for third party development. The unconventional control scheme compared to the PS2 and Xbox, coupled with Nintendo’s past interactions with third party developers were big blows to the Gamecube’s success.

In order for Nintendo to compete with the next generation they had to either match the other two, or go completely in a different direction to stand out. As we all know, they did the latter, with the motion based control system of the Wii.

“Casual gamers do not buy or play as many games as core gamers and more importantly, don’t have brand loyalty like core gamers do.”

The Wii from a technological standpoint was behind the PS3 and 360 and Nintendo knew that. They decided to aim for a more casual market with a simplified control scheme.

Nintendo wanted to tap into the growing market of parents and casual gamers who want to play video games, but were too intimidated by complicated control schemes and expensive games.

Nintendo got what they wanted: Gamers both new and old were attracted to the possibilities of the new control scheme, and publishers had a huge audience to create games exclusive to the system.

Unfortunately for every step forward Nintendo made with building a casual fan-base, they lost their core and hard core audience. As time went on, we saw less titles being aimed to explore the new control scheme and more shovel ware titles.

What also hurt the Wii with the core market was that the system lacked the majority of popular third party titles as developers did not want to convert their designs to a completely different system.

Nintendo did not seem to care, with more first party titles aimed at casual gamers like Wii-Sports Resort and Wii-Music. They even fought against porting Xenoblade Chronicles which was my favorite game of 2012.

Nintendo’s casual gamer gold mine remained strong for the majority of the Wii’s lifespan and Nintendo was sure of themselves that the Wii U was going to hit big again… except it didn’t.

The Wii-U was supposed to be Nintendo’s way of having their cake and eating it too: With a system powerful enough to run modern hardcore games, while keeping the simplified control scheme for casual gamers.

Right off the bat Nintendo did not get the core gamer audience, as they were burned once with the lack of support on the Wii and did not want to be fooled again. Looking at the Wii U library so far, there have only been a small number of games confirmed that could be considered for the core audience (Zombi-U, Mario Bros U, Bayonetta and the upcoming Monster Hunter.)

Nintendo trying to bank on convincing gamers to buy their version of popular third party titles was foolish at best. I think it’s safe to assume that anyone who wanted to play Batman Arkham City would have done so already. Even Rayman Legends which was supposed to be one of the Wii-U’s big titles has already been confirmed for the other platforms.

Once again Nintendo finds itself in a position where if given the choice between platforms to buy a third party game, they are considered last place.

“What also hurt the Wii with the core market was that the system lacked the majority of popular third party titles.

As developers did not want to convert their designs to a completely different system.”

That leaves us with the casual audience: that giant market that made the Wii famous overnight. The problem is that Nintendo has learned the same lesson that social game companies like Zynga have found out: Casual gamers are a fickle bunch.

The second they see something they like on a different game, they will move on and forget about the previous one. Or if they are still enjoying the original, it doesn’t make sense for them to spend money on an upgraded version.

That last point is a big one, as the Wii-U’s upgraded price of $300-$350 (based on the version,) was a huge difference compared to the Wii’s $250 price tag. For many casual fans, they are still playing Wii-Sports or some other party game when the time comes and have no reason to buy a new system. 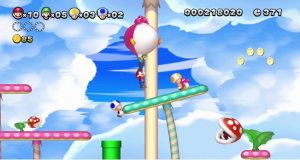 While having a new Mario game at launch was a good way to get people excited, Nintendo has got to show more to convince core gamers to come back.

Looking at everything mentioned it’s sadly no surprised that the Wii-U is not flying off store shelves.

Nintendo wanted to make a system that appealed to both their core and casual fan base, and instead made something that doesn’t appeal to either.

To further drive the nail in the coffin, the Wii-U spec wise compares to the PS3 and 360. But as everyone knows, the PS4 and rumored 720 are right around the corner. Again, this leaves a Nintendo console in the worse possible place for third party ports and more importantly, about a generation behind in terms of technology.

Putting Nintendo in a tricky spot and making the next move a tough one. If they keep with the Wii-U they will once again have to fight for exclusive games and try to convince third party developers to make quality games for it.

The problem with this option is that Nintendo is currently facing a catch 22 in terms of game development. If they want core gamers to return to the console, they need to have more first and third party games for it. But to do so would hurt their casual image which the system was marketed towards and where the remaining third party games are largely aimed at.

They would need exclusive third party games that are designed solely to function on the Wii-U, requiring additional time and money that would be risky for third party developers to put all their eggs in one basket.

The other option that would be better for the long run but kill Nintendo now would be to scrap the Wii-U and try to create a platform closer to the supposed specs of the Ps4 and 720 and try to attract the core gamers again. However Nintendo hasn’t scrapped a system since the Virtual Boy fiasco and I doubt they would readily throw so much time and money out the window.

If Nintendo wants core gamers to get excited about the Wii-U, they need to start showing us games made for advanced gamers that could not be replicated on any other platform: Where the unique control scheme is simply not a gimmick for co-op play but integral to the experience.

However the question if such a thing would be possible is up in the air at the moment and Nintendo had better start answering it soon.