Yesterday’s post dealt with the change in the Game Industry thanks to digital distribution becoming a hit. And from there, the Indie market was able to take off and provide consumers and developers with a new viable area of the industry.

The Evolution of the Garage Developer:

Indie developers have been around over the last few decades as many early developers were simply programmers who made their own games on their spare time. As we talked about with digital distribution, physical stores controlled the selling of video games for most of the 90s and this meant that a lot of games that were made did not get into the hands of the general public.

Around the start of the last decade and the rise of the Internet age, Indie developers got their first taste of freedom from physical stores. Many early Indie games were simply flash titles that were put up on a site like Shockwave.com or shareware allowing users to play a fair bit of it before deciding to buy.

Because of how decentralized the Game Industry is, it’s very hard to exactly date the start of the Indie era. But there are two examples that are each cited as giving rise to the birth of it: Introversion Software and Cave Story.

Introversion is a British developer that over the last decade have made a name for themselves by developing a wide variety of games. From the “hacker simulator” of Uplink to Global Thermonuclear war in Defcom. When most people talk about early Indie companies, they are usually the example given.

Cave Story developed by Daisuke Amaya was a major leap for the Indie market. Developed on his own time, Cave Story was one of the first indie games to directly compete design wise with the big developers.  Featuring challenging gameplay and a unique story, made all the more impressive by being developed by one man over five years.

Cave Story is considered the quintessential Indie game and was the first example of an Indie game receiving massive exposure. This exposure was all the more amazing by the fact that it came out while Steam was still in its infancy stage and not providing any extra exposure.

The importance of digital distribution cannot be understated with regards to developing the Indie market. Not only did it provide a place to sell these titles, but it meant that anyone with programming knowledge could make a game and put it in front of the eyes of consumers. So there weren’t any design or technical constraints outside of the game being playable and not buggy stopping people from making games. 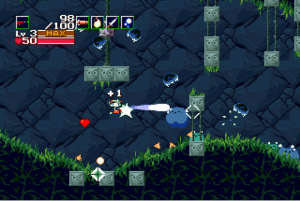 Cave Story is considered the first Indie game to become a mainstream success and known outside the Indie circle.

Another example would be Team Meat with Super Meat Boy who struggled and pushed themselves to the breaking point to release the game in time for their XBLA release and became famous almost overnight.

Super Meat Boy would simply not be a game that could have been sold on the physical market as it didn’t have the developer clout or even the appearance of an Xbox 360 game.

We’ve talked about the advantages of Indie development on numerous podcasts. While they may not have the backing and money from major developers, they are free to make the games they want without outside interference. So that when they do sell their game, they can sell it at a much lower cost and still make a profit.

Now of course the Indie market is not perfect and quality does fluctuate across it. For every developer like Team Meat, Introversion, Arcen Games and so on, there are people who put out barely working titles and attempt to swindle your money before they are caught. Or release a huge volume of low quality games hoping that people will take the bait with their low cost point.

And despite their best intentions, the backing that AAA developers receive does limit the scope compared to an Indie developer. Something like Skyrim, Farcry 3 or GTA 5 would not be possible on an Indie developer’s budget or resources. Likewise, developing a MMO like WOW would be unmanageable for a small Indie studio.

However, some people view that as a positive and feel that those limitations are what allow Indie developers to innovate. And the best example would be that little known game called Minecraft. Built with very basic graphics but the scope of exploring a brand new world was unheard of at the time. And over the years became not only the poster boy for Indie development, but also the goal to strive for.

Minecraft has been the quintessential Indie success story and spawned numerous imitators and designers looking for the same results.

And many Indie developers do aim for that goal: To make a game that is so amazing that they could earn enough money for life with one game. But the chance of that happening is minimal and could be its own discussion.

The Indie market has certainty come a long way since the last decade and tomorrow’s post will talk about the latest trend that has become a hotly debated topic.