The Three Senses of Horror : Touch

Continuing my look at how our senses can help add horror to a game. Today’s post is about touch or specifically how gameplay can be used to create terror. However there is a fine line between adding tension and creating frustration.

Yesterday’s post about sight talked about how some of the best horror moments came when you least expect it and are gone before you can really make sense of it.

What that means in terms of gameplay is hitting the player with a situation removed from the rest of the game or effectively changing the rules of the game for a short period of time. For instance in Vampire The Masquerade: Bloodlines, the haunted hotel level mixed things up by removing all combat in lieu of exploration and introduced a “threat” that was stronger than a vampire.

Normally the player would be the strongest force in the room as an immortal vampire, but the developers switched it up and made the player feel vulnerable. By making a strong character feel weak, it was able to make what was normally an ARPG feel tense.

However, changing the rules too far can have the opposite affect if it is too much of a change from the normal game. An infamous example of mixing things up in an action game is removing all the player’s weapons and forcing them to sneak around to get them back.

In these situations, the designer is forcing the player who is use to an action game where they could fight their way out of everything and instead must now sneak around.

On our cast we discussed the change in tone that introducing zombies to the Thief universe had in the first game. Many people complained about both the tonal shift and the fact that the designers introduced an enemy who broke so many of the established rules of the game. 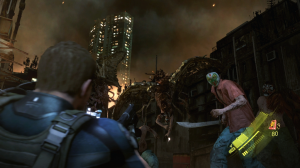 Resident Evil’s transition from horror to action may have improved sales, but removed much of the horror.

Moving from strong characters, there is a popular opinion that in order to have horror that you need to create weak characters.

This was the rationale for the PS2 generation featuring numerous horror games with teenage girls as the protagonist as they were not designed around being bad-ass heroes.

To translate that into gameplay, the designers shackled the player with things like poor controls, fixed cameras and a character who can barely fight if not at all.

The problem that I find in games like this is that by removing the player’s ability to manage their character, that the game becomes more frustrating and less scary.

Case in point Amnesia the Dark Descent, which I’ve gone on record saying that it was more boring to me than scary. As there was no choice to the encounters with the monsters: Either run or die. When the player isn’t in control and unable to make their own decisions about what to do then the game loses a lot in terms of tension.

On the cast we brought up as a great example of player defined tension with Demon and Dark Souls. While the series is not really about horror, the games do an excellent job of providing tense gameplay.

You never know what’s around the next corner or what the next boss is like and this can make a player question their resolve to go down that path or cross that bridge.

Remember, it’s not about making the player a bad-ass who can fight their way out of any situation, but giving the player enough control so that they feel like they can have some impact on what’s going on. Hiding, making distractions, an attempt to knock an enemy off balance, these are just some of the ways that a player can do something without being viewed as “powerful.”

Now there is so much more that I could go into detail about with horror design but a lot of it would be me repeating myself. If you haven’t looked at these yet, here are the posts I wrote about antagonist design and the general problem with co-op and horror design.

Before we end this part I do have one thing that I want to say about multiplayer and horror.  If done right, I can see a multiplayer game working as a horror title which we talked about on the upcoming cast. The key point is that the players can’t be tied at the hip to each other and should be forced to split up. 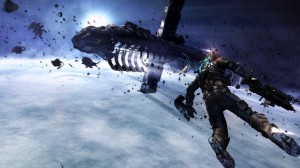 Dead Space 3 featured co-op that was more about having a second gun than really increasing the horror.

Imagine playing an online game where you and your eight friends are being stalked by a Jason homage and are forced to explore an open world to find the means to fight or escape.

No one is the hero or safe and it forces the group to make that always difficult choice to split up. Picture someone having to decide to be bait at the risk of their own life to give the group a chance to escape and the idea opens up so many possibilities.

There is also the concept of having one player be the monster and stalk the other players and there is currently a game available on early access called Damned that is going that model. I haven’t played it but the idea sounds intriguing.

As with visual and pacing, getting the gameplay to go with creating a horror game is a challenge. And to wrap up this series, tomorrow I’ll be talking about sound design and setting the mood.

The Three Senses of Horror: Sound