Over the weekend I had something that I haven’t experience in a long time: a nightmare- Specifically a “wake up with your heart racing” nightmare. It’s been a while since a nightmare has actually made me wake up tense as I’ve reached a point where nothing really scares me in real life.

But enough psychological talk, the element of the nightmare that relates to game design is an unexplored area of horror in game design: antagonistic.

A Game of Cat and Mouse:

In my last post on the subject of horror design, I focused specifically on the protagonist, looking at alpha heroes. This time, we’re going to flip it around and talk about the thing (or things) that are trying to kill you.

Going back to horror movies while there are two types of protagonists, there are also two types of antagonist : horde and mastermind. Horde is where the hero is dealing with mindless creatures on the hunt, or some kind of rampaging monster as the focus. We can include everything from zombies, to aliens and just about every Sci-Fi channel original movie.

If there is some kind of main villain who is either controlling them or is a monster itself, it is still considered a horde type as the main threat comes from it unleashing its minions at the hero. The necromorphs in Dead Space, while supposedly under control by the marker, were still left to run around and cause destruction.

A mastermind antagonist is someone with an actual agenda and not just about running around causing trouble. These characters will do their best to stalk their prey, get the group separated and are usually the stand out character in the story. Characters like Pinhead or Freddy Kruger as an example.

We could probably debate if the thing from “The Thing” would be either a horde or mastermind type monster. On one hand the creature did everything it could to blend into the group the best it could. But then again, it wasn’t that smart once someone found out and attacked it.

Incidentally, stories that feature horde type antagonist are ones where the hero is usually an alpha character, while the reverse is true for mastermind antagonist. The reason is that when the antagonist is the stand out character, the viewer becomes invested to see how they are going to get rid the survivors and how said survivors will hopefully get away.

This kind of cat and mouse game is one of the main sources of terror with mastermind antagonists: as you know someone is going to die, the only question is when. But for such an interesting take on the genre, it’s one we don’t see in video games often.

Antagonist villain design is an interesting concept for a horror game as the player is not the one in control, but the villain. More importantly it would get around one of the biggest barriers of creating scary games: linearity. If you had a game where the AI would actively track the player and do whatever it can to get the player into a trap to kill them, there would be no set attacks in that case.

Imagine playing a horror game where you could never really be safe as whatever you came up with, you knew the monster would be coming up with a workaround. I bet for a lot of people reading this that last statement made them excited about the possibilities but there are a few catches. 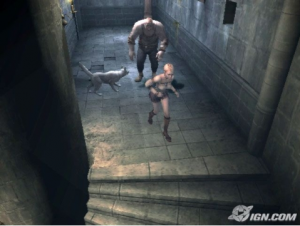 Haunting Ground was all about hide and seek from the chasing antagonist, while trying to solve the game’s many puzzles.

First is that there are very few games that go with the mastermind approach. With the only three that I can think of would be Resident Evil: Nemesis, Haunting Ground and the Clock Tower series.

But while each game did have a reactive villain, the titles were still largely linear.

You as the player had to complete tasks in a reasonable order and there were cases where the enemy would just show up at set points.

Trying to make a game with a mastermind villain in today’s setting is especially tough, as we have seen from most major developers that they believe that horror is out. Both Resident Evil and Dead Space have become more action-horror then survival which go against the mastermind format.

The player should not be the one in charge just plowing through everything; they need to be weak and forced to react to the situations around them. But of course that goes against the concept of having an action based hero.

Now the tougher issue is on the technical side, as you would need a highly complex AI to effectively “play” the game against the player. Something like the AI director from Left 4 Dead taken to the extreme, but that is not an easy task. Strategy game designers, who make some of the most complex titles around still haven’t figured out a way to make a completely reactive AI.

And that is the key ingredient in making a horror game where the player is truly being hunted by a superior force: Where attacks are never predetermined and the path through the game is always different.

As mentioned, many major developers feel like the horror genre has been played out, but maybe they’re just looking at the wrong kind of horror. Left 4 Dead’s experiment with the AI director showed the basic concept of having an AI affecting the experience. Taking that and expanding on it could open the doors for reviving the horror genre in the eyes of mainstream designers.