2012 could arguably be described as the year of crowd funding: as developers both big and small turned to kickstarter as an alternative to publisher deals.

Indie developers such as FTL had success with kickstarter, but it wasn’t until Double Fine had their success that the craze began. Now in 2013, the many projects that have been funded are moving forward with development as gamers eagerly await their return on investment. But a recent article and argument has brought a new topic to the front about the purpose of additional funding.

The argument began with an article on Gamasutra about how Gamasutra UK editor Mike Rose won’t be pledging to kickstarter anymore. The game he cited as his problem was Stoic’s successfully funded strategy game: The Banner Saga. Now I did not pledge towards the Banner Saga and actually didn’t hear about it until after the kickstarter was over so I don’t have firsthand experience with what’s going on.

Mike’s argument was that after the game was funded with more money then what was needed, the developers decided to work on a multiplayer free to play title that would be released.

In response, Stoic’s creative director: Alex Thomas issued a statement on Gamasutra correcting the claims that Mike and other backers had about The Banner Saga. First and most importantly was that the developers DID tell everyone that the plan was to release a multiplayer version of the game before the singleplayer. You can hear this in the kickstarter video linked above starting at the four minute mark.

“… it’s important to remember one simple fact about kickstarter: it’s not a pre order service, no matter how much you want to believe it is.”

That alone in my opinion exonerates Stoic of any vitriol from the fans who did not watch the entire video. The other part is that Stoic has been supposedly (I say “supposedly” as I wasn’t a backer and can’t confirm it) sending out email updates to their backers with information about the multiplayer and why the single player was delayed.

If you choose not to read updates with important information then you do not have the right to complain when you are the last to know about major updates.

Trust me; working at Comcast for two years I had plenty of calls from people who ignored TV ads, mailers, emails, phone calls and messages on their bills about the change to digital requiring TVs to have some form of a cable box to broadcast channels. Who then incorrectly complained that this change was forced upon them with no prior warning.

Now the full results of this issue are still in the air at the moment of this post, but I do want to touch on another area of this complaint: What to do with excess money?

Money to Burn or to Build?

A kickstarter project can be a fickle mistress: you could fail, you could get just enough of your funding, or you could hit the lottery and make several times more then what you were asking. While the former two have easy to see outcomes, the last one can be trouble.

Some kickstarters from the get-go have stretch goals in mind for what they will add after the game has hit their goal, while others don’t consider them until afterwards. The point is that for projects that go well over their goal, there is this opinion by backers that the money should go towards expanding on the game content.

In my opinion I don’t agree with that and that it’s up to the project creator as to what to do with additional funds. Now, if they want to make the game bigger and better then that’s fine by them. But, don’t think that you are owed anything more then what was promised because the developers got more money. 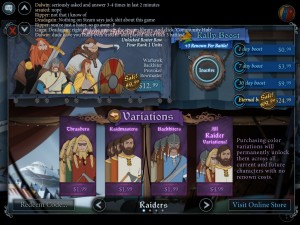 Not helping Stoic’s case: Having micro transactions in their free to play game, as many unfortunately view it as being greedy

With FTL for example, the game went well over what they were asking for.

But the developers did not have any additional stretch goals in mind nor did it appear that they added more to the game based on the additional funding.

Personally I would have loved for them to expand on the game, but that’s not what was promised in the kickstarter.

There is a catch 22 for stretch goals in a kickstarter promotion: If you don’t have them then people feel that you are taking their additional money and running away with it.

If you do have them then people think that you are hustling them for more money and holding additional features hostage. That’s why you need to be as upfront as possible with people and explain to them exactly what funding gives them: It’s better to provide free stuff out of the blue then it is to over promise and not be able to deliver.

In the end it’s important to remember one simple fact about kickstarter: it’s not a pre order service, no matter how much you want to believe it is. At the end of the day you are giving your money to support a project that you feel should be made. And whatever was promised by that project is what you are owed, nothing more and nothing less.

Until Stoic comes out and says that the single player is cancelled and that they’re moving to private islands in the Pacific, then as long as they continue updating they are upholding their end of the bargain. While Mike has been proven wrong, he does make one important point.

2013 is going to be the year where we will see the outcomes from all those projects of last year. And kickstarter’s future as an option for game development will hinge on the success (or failures) of those projects.

Putting the “Game” in Gameplay