A few weeks ago on the cast, a friend and I talked about DMC Devil May Cry and how great an action title it was. The action genre is one of my favorites to examine because it requires the most player skill. You can really get a feel for the systems and mechanics at play in action games, as opposed to games built around abstracted systems.

For this quick series of posts, I want to talk about what I feel are three important parts of making an action title, starting with flow or how the title plays.

Flow can be attributed to two parts of an action game: Movement and Combat and we’ll start with combat.

One of the biggest shifts in terms of action game design between the older arcade titles and what would become the standard for action games like Devil May Cry and Ninja Gaiden was how characters fought.

In the old days when the action genre was known as the beat-em-up, characters were very rigid in terms of combat. There were very few games that featured combos that were more complex than hitting punch over and over again and the ones that did feature combos weren’t that responsive.

The lack of flow can also be seen in the evolution of the fighting genre, where early on most combos were hard coded into the design. If the player tried to improvise, their character would stop dead in their tracks as the character wasn’t designed with any additional moves other than the combo strings.

For these games, the focus was more on button inputs, set combo patterns and special moves as opposed to actual combat. Titles like Mortal Kombat, Street Fighter and a bevy of other fighting games followed this design.

This left many early fighting games feeling very mechanical and the same could be said of the beat-em-up genre. But when titles like Virtua Fighter and Soul Edge (which became Soul Calibur) came along, they went with a different design and feel.

Instead of focusing on a limited move list along with special attacks, these games went with a far more fluid system. Here, characters didn’t have set combo chains and instead were given a huge list of attacks. Previously, pressing back- punch wouldn’t do anything in a fighting game, but these games gave the player a lot more choices.

So, back-punch, neutral- punch and so on were each their own unique attack, with different animation frames, attack damage and more. This allowed advanced players to figure out how to string these moves together into their own combo chains instead of having everything hard coded. Now, these titles did have combos built in, but they were easier to grasp and to pull off compared to other fighting games. 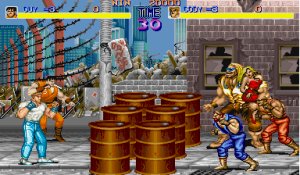 Early beat-em-ups were not about having elaborate move sets but simple actions.

Instead of having the character simply stop responding for a second if a player failed an input, the moves themselves were designed around response delays.

So that quicker moves could be chained while slower and more damaging attacks left the player open.

As the fighting genre began to adapt this fluidity concept, it soon transitioned to the action genre with the first game making use of it being the original Devil May Cry.

What Devil May Cry and so on did that changed the genre was present a far more agile and responsive character compared to the beat-em-up era. Devil May Cry was designed around the fact that the player should never be standing still and should always be doing something. This was made thanks to the responsiveness of the character and the very quick periods of inactivity between attack combos.

As more action games came out in this vein, the concept of verticality was introduced, allowing players to knock enemies into the air and continue attacking them. The player could also quickly move to and from enemies allowing for a continuous string of attacks which games like Devil May Cry rewarded the player with a combo stylish ranking.

Taking this back to the recent DMC reboot, Ninja Theory made a surprisingly responsive system thanks to the ability to pull Dante towards enemies or pull them towards the player with the help of chains. Not only did this allow for more combos but it let the player continue attacking without the need to chase down an enemy.

What it comes down to is that good flow is about keeping the character in action without any breaks, but also without losing control. Many action games have combos or special attacks that let the character continue attacking after the player has completed the combo, leaving them vulnerable to damage. 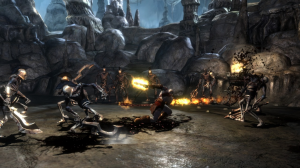 Modern action games were all about giving the player a variety of moves and defensive options.

There’s a fine line between a kinetic character and an out of control one. A good sign that a character is out of control is when during a fight, more times than not the character will keep going through an attack even though the enemy has moved out of the way.